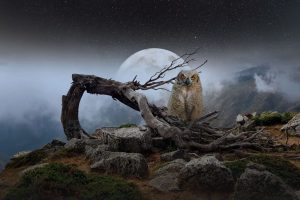 Birds are animals full of symbolism in almost all cultures, the meaning of the owl in the spirit world has been much discussed since ancient times.

These creatures lift us to heaven and take our supplications to the highest. They return with spiritual messages from the divine to help us through our difficult times.

The owl has unique features that naturally make us curious about the symbolism. This makes us want to ask questions like: what does an owl symbolize spiritually and even biblically?

Let’s see below, the answers to these questions and know the spiritual meaning of the owl.

Owl: Meaning in the Spiritual World

An owl is to the night what an eagle is to the day. Owls are usually a symbol of paranormal wisdom, royal silence and fierce intelligence. This is because owls are great thinkers and hunters; they prefer to plan their strategies rather than use brute force.

While some cultures believe that owls are death witches, the white owl symbolizes wisdom and endurance.

Owl symbolism and Celtic tradition describe her as a warrior and guardian of honor. According to the Celts, it was the wisdom of the warrior owl that gave him the right to know the path of the underworld. They also believed that she represented a fierce defender of honor and truth, meaning owls have zero tolerance for any form of deception.

As owls are nocturnal, meaning they can see in the dark, they are the perfect messenger to deliver messages throughout the day and night between our world and the upper. Perhaps this is why the Celts believed that owls knew the way to the underworld.

Owls are also a symbol of the ancient Celtic goddess of fertility. That’s why the Celts proudly marked the owl symbol on their clothes, especially their knots and various household items.

Chinese culture and folklore highly respect the wild side of the spirit animal owl. You can find stunning pieces of ancient Chinese art that depict the immortality of the phoenix intertwined with the legendary ferocity of the owl. Chinese culture also speaks of the owl as protecting birds, acting as a shield against all negative energies.

There are also popular references to owl mythology in civilization over time, such as Hindu and Roman. While most of them speak of its negative aspect, they also recognize the owl’s transient wisdom and meaning.

Biblical Meaning of the Owl

There are several references to the owl in the Bible, which we present below:

Deuteronomy 14:15-17 confirms the statement of the kosher rule.

In Psalm 102:6, the psalmist speaks of the difficult times in his life by comparing himself to an owl in the wilderness. He used the owl reference as an example of himself as a lesser creature trapped in a desolate place.

Isaiah 13:21 tells of a prophecy about God’s judgment on Babylon to destroy her. Here the owl is again used as an example to demonstrate the devastation that Babylonian humans will face. They will be killed or driven from their homes, and wild animals will live in the city.

In Isaiah 34:11 , very similar to Babylonian prophecy, God’s judgment on Edom refers to the owls in the destruction of the city. The owl does not symbolize anything. Instead, references use the owl as an example of wild animals that inhabit the city along with crows, pelicans, and porcupines.

If you come across an owl crowing on the road, it could be a sign that you are receiving terrible news, for example, that someone close to you may have a serious health problem or be close to the last days of life, and you may get the news sooner. This omen is stronger if you see an owl in your house.

Although bad news can also mean deception around you, for which you should prepare yourself by re-evaluating everyone around you.

Still, if it’s not a bad omen, it’s definitely a warning sign. It is very possible that in your care you will find some information that may be useful to you in the future.