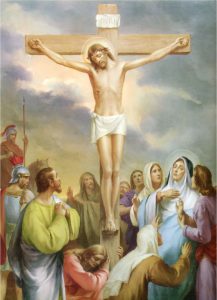 With the reading of the following article you will be able to know what the 7 Words of Jesus were, their meaning will be explained, later and as a summary a conclusion will be made about it.

What are the 7 words of Jesus?

His last sentences at the moment of being crucified are known as the Seven Words of Jesus on the Cross , evidently all these words were pronounced minutes before his death and were recorded by the apostles. All of these are recorded in the canonical Gospels.

Jesus’ first sentence was: Father, forgive them for they do not know what they are doing. This phrase is found in the Gospel of Luke (LC 23, 24). This phrase is very broad despite what it seems, this is because it does not specify who must be forgiven, easily Jesus Christ could have referred to the Jewish people who abandoned him , to the soldiers of Rome who tortured him, to the 2 sides involved or as is commonly believed, to all humans.

The most religious people are used to making prayers as a result of each of their phrases, as well as praying the rosary with some of its Mysteries, in these prayers it is normal to see that the fault that the Jewish people had at that time is recognized for having denied the Lord and his sacrifice for all humanity is praised, Jesus is begged to intercede for us before God the Father Almighty.

During the second word of Jesus, he meets the 2 malefactors who were carrying the crosses behind him and in that one of them begins in a mocking tone to challenge him, alluding to the fact that he was supposedly the son of God, he was the messiah, he asked the reason why he just wasn’t saved from that punishment, why didn’t he save them from that punishment?

The other malefactor who was also being punished upon hearing that asked  , very surprised, where is  your fear for God? This as a result of his words, then he turned to Christ and recognized all his sins and admitted that both criminals were deserving of said punishment, but he was not, the son of God was a good man, he had not done anything wrong that deserved  punishment as bizarre as the crucifixion.

Later he makes a plea to Jesus in which he asks him to please remember him, when the time comes for Jesus Christ to arrive in the kingdom of heaven, please keep him in mind and remember what was happening. Just at that moment, Jesus replied “I assure you that today you will be with me in Paradise” (LC 23,43).

Right at the foot of the cross where Jesus was crucified were some people close to him, his mother, the Virgin Mary, his aunt, Mary’s sister, Mary Magdalene, and one of his disciples whom he loved the most. Seeing them gathered there just below his cross , he decides to entrust his disciple with one last task.

That is when Jesus Christ addresses the Virgin Mary and says “Woman, there you have your son”, immediately afterwards he says to his disciple “There you have your mother”. From that emblematic event, the dear disciple decided to receive the mother of Jesus in her house (JN 19, 26, 27) just as he had been told when she was at the foot of the cross.

One way to interpret this third word of Jesus is that he cared about what would happen to his mother once he died, in this sense one of his last wishes was to leave someone to take care of her, therefore he asked the disciple to she loved more that he was in charge of her well-being.

Jesus Christ was an only child, therefore Mary lacked any brother he might have to help her after he died. Mary was also a widow at the time since Joseph had already passed away, so it was Jesus’ responsibility to ensure that she was in good condition.

Here you can see how important it is to fulfill the sacred duty entrusted to you by Christ, but more importantly, you can understand how the relationship with God Almighty Father works, how love works, if one really feels love in his heart. by God, then you will really feel love for your fellow man and will be able to help him when the time comes.

In the fourth word, Jesus exclaimed to his father and also questioned him , Oh my God, why have you abandoned me? Just after this happened, one of those present ran out, looked for a sponge and made it absorb the vinegar, tied it to a stick and gave it as an offering to quench his thirst, however, all those present said «let him, let’s see if Elijah comes to save him» (Mt 27, 46,49 and MC 15, 34, 37)

This phrase of Jesus Christ is usually one of the most controversial, Jesus is recounting Psalm 22 of the Bible, a psalm that begins with those words. Jesus gave himself wholeheartedly to be crucified in order to save humanity, the deity part of him was pleased to do so, but Jesus was also part human, the mortal part of him felt abandoned by God the father.

One way of seeing the feeling of abandonment that Christ felt is that just at that moment he could have repented of his sacrifice, however it is only a very subjective way of seeing it, the most objective possible way of seeing this is that the human part of Christ I felt pain and this is something that happens to all humans, even those with greater faith.

The church had problems accepting this phrase of Jesus, it can get many out of place as it questions God the father for having left him without his help, perhaps due to a divine intervention that never came while he was crucified, however this human part of Jesus only he wavered for a moment and this was enough to be tempted, only by regaining faith did Jesus keep the strength to continue his mission.

Once the destiny had been fulfilled, Jesus, knowing that everything was finished, exclaims before the crowd “I am thirsty” (JN 19,28). With this phrase in particular you have to be quite careful when interpreting it because its meaning is very deep and in a certain way ambiguous, therefore staying only with a literal interpretation could distort its true intention.

On the one hand, if thirst is interpreted as a need of the human body, it could be due to the strenuous work that Jesus had to do throughout that day, as he lost blood and dehydrated until the moment he was crucified, the effort was so great that It was a pretty logical interpretation.

On the other hand, there is the interpretation that the thirst to which Christ refers would be a spiritual thirst, thirst for wanting to confirm the forgiveness of humanity, save them all from sin through their sacrifice, this spiritual thirst could be due to the sense of abandonment that Christ briefly felt at the time of being crucified.

Jesus finally drank the vinegar and in doing so exclaimed «Now everything is finished» (JN19, 30). As a result of this exclamation of Jesus Christ, what was in the sacred scriptures (the Bible) was fulfilled. Here you can see that Jesus completed his mission with humanity despite all the temptations he had from the beginning of his passion.

When Jesus fulfilled everything that was established in the sacred scriptures, the will of God the almighty father , he felt satisfied because he could endure a journey that no human could have completed, more than pain or agony, Jesus felt victory or joy because finally «everything had been consummated.”

Just reaching the final moment of his life as a human, Jesus exclaimed with a loud cry of pain “Father, into your hands I commend my spirit” and just as he finished that sentence, Jesus Christ the Son of God the Father Almighty died (LC 23, 46) After having suffered so much, with this simple act Jesus reaffirmed  his faith in his father.

This phrase has so much value because it is a sign that despite having been abandoned, humiliated, tortured, spat on and tempted, he continued to believe in the plan that his father had for him, despite the fact that the scenario was not exactly the best possible. , he did not deviate from the wishes that his father had for himself, this was the greatest show of will that Jesus had while he was still alive.

Reflections and conclusions of the 7 words of Jesus

With the First Word of Jesus it can be seen that despite being suffering one of the greatest agonies that someone ever had to endure, his will was not broken, he understood that everything was part of the plan of God the almighty father , he understood that he had no need to hate them, instead, even in the adverse situation he was in, he begged his father to forgive them for the atrocity committed.

Seeing the Second Word of Jesus, you can understand the reason why it is said that he is love, he heard the repentance of the evildoer who had been hanged next to him and exclaimed that he would see him in heaven, this proved once again the great love that Christ felt for all humanity, showed that if repentance is from the heart, the kingdom of heaven will receive us with open arms.

For the Third Word of Jesus , it can be seen how he, despite the fact that he was leaving his mother, did not leave her helpless, since he entrusted the task of ensuring her well-being to his beloved disciple, thus demonstrating that despite loving her, he understood his duty to God’s plan, but in the midst of it all he found a way for her to be okay after he left.

For the Fifth Word of Jesus, in this phrase that Jesus Christ exclaimed , the duality of meanings that this could have can be observed, for example, it can be seen  that his human part is thirsty or , on the contrary, his spiritual part is thirsty for faith. , which when analyzing the context in which it develops, it can be seen that it is a more spiritual word than carnal.

In the Sixth Word of Jesus, it can be seen how he, already satisfied for having completed the journey that God designed for him, accepts his destiny on the cross, here it is seen how at the end, after having gone through such a painful ordeal, Jesus was already close to finishing the plan that God designed  for him.

Finally, in the Seventh Word of Jesus, he entrusts himself to God because he has already finished the plan that he had drawn up for him, fulfilled the demands of his father, endured a journey full of hardships and emerged triumphant from all temptations and humiliations. that appeared in front of him.