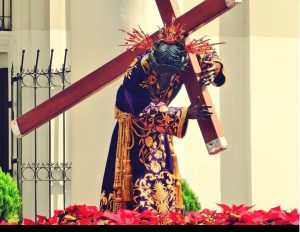 For all Catholics, the image of the Nazarene is very important, it is highly revered by the Venezuelan congregation, even from other parts of the world. In this article we will talk about the prayer to the Nazarene, considered very miraculous in many cases, we invite you to know it.

Prayer to the Nazarene of Saint Paul

Every Holy Wednesday this beautiful image of the Nazarene of San Pablo is venerated, it is a custom that is made during the time of Holy Week or Major Week in the Catholic churches of Caracas.

This image is closely related to innumerable miracles done to his devotees or parishioners, there is the prayer to the Nazarene that, as we said before, is usually very powerful and effective, as long as we have all our faith in Jesus Christ himself.

In this prayer to the Nazarene of Saint Paul we ask for help in any need, recognizing the humility and good heart that Jesus has regarding the poor, we recognize his great sacrifice, which he suffered through his Passion carrying that cross to Calvary, this being so heavy and fulfilling everything for the redemption of all humanity and its sins.

We can ask him for his protection, blessing and that through his sacred heart he grant us what we ask for, waiting for the answer confident and with great faith in him.

In the prayer to the Nazarene we speak in a humble way of heart with Jesus himself, we must adore him, glorify him and keep in mind that he loves all his children equally, and that we are before a Jesus friend, Father and King of all those who request your help.

The Nazarene of San Pablo and his image, is one of the main devotions of every believer in the city of Caracas. It is a figure carved in Flanders pine wood from Seville, Spain, it is said that Felipe de Ribas during the seventeenth century.

A well-known legend tells that the sculptor, when he finished carving the image, the Nazarene appeared to him and said: “Where have you seen me, how perfect have you made me”. However, we will talk about this and other legends in later paragraphs.

It was brought to Caracas, where it was initially received in the Chapel of San Pablo, hence its name San Pablo. The image was sanctified by Fray González de Acuña on July 4, 1674, and received recognition in 1880 during the mandate of Guzmán Blanco.

In this period, Guzmán Blanco gave the order that the temple be demolished and created the Municipal Theater today. Guzmán Blanco himself ordered the Church of Santa Teresa (today the Basilica of Santa Teresa) to be built in homage to his wife, where the image of the Nazarene is transferred, this being its current place and where it receives the most revered worship.

The devotion to the image of the Nazarene has the characteristic that it mobilizes hundreds of Venezuelans from all corners of the country to come and see the miraculous image. There are even people who come from other parts of the world just to see the special image of the Nazarene of Saint Paul.

Many people come to the sanctuary in order to pay promises fulfilled by the Nazarene. They also accompany the procession on Holy Wednesdays with a duration between three and four hours.

This beautiful and miraculous image of the Nazarene is the one that participates the most during the celebrations of the Holy Week in the city of Caracas, and it is customary that every Holy Wednesday, a special Liturgy is prepared as well as millions of parishioners are expected as we said come from various parts of the country.

This day it is customary for devotees or parishioners to wear purple robes in homage to the Nazarene, as a symbol of respect, love for Jesus himself.

At the time of his departure in procession, he is dressed in a purple tunic which is embroidered with gold threads, with the symbology of the Passion of Jesus as well as pearls, rings and five thousand orchids.

Legend has it that, in the year 1697, an epidemic of the plague of black vomit or scurvy hit the city, of which in the following paragraphs we will detail more these beautiful anecdotes of the venerated image.

Some people of different ages and periods say that two very particular episodes happened with the venerated image of the Nazarene of San Pablo, which is found in the Church of Santa Teresa in the city of Caracas.

There was a time when the city of Caracas was hit by a plague that was affecting most of the inhabitants, children, the elderly, men and women of all ages, they suffered from black vomit or scurvy.

One day of Holy Week (specifically Holy Wednesday), the image of the Nazarene was taken in procession through some streets of the city of Caracas, some nervous, tired and even anguished people for their relatives saw that the image was passing by and they cried out to him to heal them.

At that precise moment in the corner called Miracielos specifically, the cross in the image became entangled with a lemon tree, the people trying to untangle the cross saw how lemons began to fall everywhere, people shouted Miracle! Miracle! They began to make drinks with the fruit, all curing themselves instantly, with that miraculous drink.

For this reason, the Nazarene of San Pablo is also known as the Lemon Tree of the Lord, there is even a poem by Andrés Eloy Blanco about this beautiful legend.

Another beautiful experience that some people tell is that at the moment that the sculptor was carving the face of the image, he heard a voice that said to him: “Where have you seen me, how perfect have you made me?” They say that due to the great impression of that This sculptor died, thus leaving this narrative in the hearts of the parishioners of Jesus of Nazarene himself .

Powerful prayer to the Nazarene for an urgent need

We recommend to the reader that this prayer be made with great Faith and with the full security of receiving from Him the grace and the miracle that we are needing.

Dear Jesus help me in this urgent need (here the request should be said) I ask you this on my knees, with humility and trust, listen to me oh Lord and grant me soon what I ask of you. Take away from my Father the misery, the poverty present in my home.

Bless me Lord and give me your protection, be my shelter, grant me your grace and allow me to fulfill your commandments and be with you in your Kingdom forever and ever. So be it.

When we make this prayer to Jesus Nazarene , we must pray an Our Father, the Glory for three days, it must be done with great faith.

Through this prayer to Jesus Nazarene we achieve the recovery of any type of condition or illness that we are suffering, either ourselves or a family member.

We must ask the miraculous image for our request with great faith and remembering the great mercy of Jesus himself and trusting in his powerful hand, let us keep in mind that he knows all our needs before we entrust them to him, so that we have the confidence that he will help us. will help where we need.

Encouraged to know that Jesus is all love, goodness, humility with all of us his children, through this miraculous prayer, let us ask him for any need we have, remembering that Jesus is our Redeemer, let us give him honor and glory, always acknowledging his will and that if It is favorable for us that you grant us the grace we ask for, but that it be your holy will that is fulfilled.

All prayers to the Nazarene are very powerful, we should only do them with the greatest possible Faith and in a quiet and peaceful place.

We hope that the reader has been filled with the most beautiful impressions and sincere love, true faith before the narrative of both the history of the Nazarene, his miracles, and that through these beautiful teachings they serve as a reason to certainly believe in a Jesus. alive, true, who loves each one of his children with the purest and noblest love that only He professes to us.