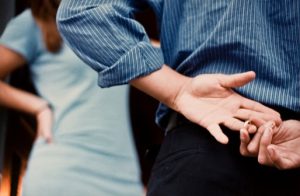 Adultery is the term used that refers to the sexual relationship that can be maintained by two people who are married to other couples. It can be both or only one of the parties involved in a relationship.

Adultery is an infidelity not only of the heart, since the promise to a husband or wife is broken by having sexual relations with a third party who is not our partner.

Adultery criminal code : Despite being considered a crime by many cultures, this has not prevented men and women from practicing it left and right, giving in to their most perverse desires and letting themselves be carried away by lust and sin.

It is important to note that adultery can also be generated by mere sentimentality, therefore, temptations should be avoided regardless of where they come from.

If a husband is overwhelmed with work, the wife may feel lonely and be tempted to commit adultery . Important at this point: communication and the will to stay faithful, give yourself due importance and avoid temptations.

Adultery is more of a cultural issue than anything else. For example, in certain countries it is considered normal for a man to maintain relationships and even marry more than one woman, however, in many cultures he is not well seen and punished; There are other people who just don’t believe in lifelong relationships.

what the bible says

Why does it matter?

Mainly for two reasons: the first, the vow or promise to the spouse is broken the day they said “yes, I do” and promised to love each other and be faithful to the other until death separated them. The second is that children can suffer the consequences of adultery .

Does adultery end the marriage?

Of course! Adultery can immediately result in divorce.

Divorce for adultery: The Bible allows a person to divorce their husband and wife if they have been unfaithful (Matthew 19:9). The faithful party must then decide whether to continue the relationship or give in to a necessary divorce for adultery .

Obviously, this is a very personal decision, and it cannot and should not be manipulated or conditioned by third parties, even family members (Galatians 6:5).

Is adultery an unforgivable sin?

God forgives adultery , and facts that can attest to it can be found in Acts 3:19; Galatians 5:19-21, where God forgave many adulterous men and women, but who later repented, and even became friends of God.

What is considered “adultery” in the word of God, and what are its consequences?

In the New Testament, in Matthew 5:27-28 Jesus expands on what it means to commit adultery . He no longer only limits him to having sexual relations with a third party, but also incorporates thinking or desiring another person.

One of the legal consequences of adultery is divorce, however, for each country there are different penalties.

According to article 185 of the Venezuelan penal code, before such an act can be denounced, the divorce process must be completed and three fundamental requirements must be met:

How to get out of adultery according to the bible?

An interesting and necessary question would be how to get out of adultery according to the Bible ? If the sin has already been committed, the first step is to apologize to our spouse (Psalm 51:1-5), then avoid all flirtation, no matter how “subtle” it may be, flee from pornography, and stay away from anyone who can generate some kind of attraction.

If, on the contrary, it was your spouse who made the mistake, ask God for consolation and understanding, because he fully understands your feelings in the face of said situation. Psalm 55:22; Malachi 2:13, 14.

Adultery book : Paul tells us in a forceful way that whoever fornicates, sins against his own body and warns us to flee from fornication!

Our body must be to worship and glorify God; Matthew 5:27-28 offers us an extreme action saying that it is preferable to lose a member of the body than to fall into sin.

In every respect tempted as we are, yet without sin

Hebrews 4:15-16 invites us to reflect, telling us that in the face of the slightest impure thought there is no better way to get rid of it than by confessing, since it is a way of asking God for forgiveness.

Countries such as: Argentina, Colombia, Brazil, Chile, Spain, Mexico, and Paraguay, considered adultery as a punishable act, however, currently, all these countries are free of criminalization.

Puerto Rico is the only country that maintains the criminalization of adultery since 2004, however, there is no record of any case.

In some countries it is a requirement to be able to prove adultery that the act be committed under the roof of the spouses, which makes it extremely difficult for it to be proven and recorded.

Many jurists consider that adultery should not be considered a crime, but rather, as a breach of the marriage contract, and of course, a very serious offense against the spouse, but it should not go too far.