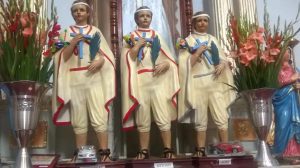 For the Catholic Church, a martyr is one who suffered and died, being an example of the love of Jesus. Death and suffering must transcend the adversities of everyday life. Discover first-hand and in a simple way everything about the child martyrs of Tlaxcala, canonization, who they are, how many there are and much more, do not stop reading it.

Martyr children of Tlaxcala, who were they?

The children were called Cristóbal, Antonio and Juan, after the visit of the Spanish to America, they were the first evangelized by Franciscan and Dominican friars. The exact date of their birth does not have an exact record, but what is known is that they died between 1527 and 1529.

This child was born in Atlihuetzia, and was the eldest of the sons of the cacique Acxotécatl, with his first wife Tlapaxilotzin. In the company of his three brothers: Bernardino, Luis and a third whose name is unknown to date, he was sent with the Franciscan friars, who had just arrived in Mexico so that they would evangelize his people.

He was baptized and educated by the friars, who affectionately called him Cristobalito , and he was entrusted with the task of evangelizing his father, wife and servants into practicing Catholic believers. Cristobalito’s father liked to drink pulque a lot, and was constantly drunk, which is why he did not accept his son’s offer to convert to the Catholic religion.

The boy Cristóbal, in a call or outburst of faith, overturned the vessel where his father had the drink, and destroyed all the clay figures of the idols. His father, blind with rage, beat him many times with his club, until he died, and then burned him at the stake.

He was rescued from the fire by his mother and a group of servants, much of the day had already passed, and he was still alive, to which he requested that his father come to his deathbed. Already dying, Cristobalito forgave his father, convinced that such an act would guarantee him eternal life.

His father being by his side, he uttered the following words:

“My father, I don’t want it to remain in your thoughts that I am angry with you, or I will die full of resentment. I want to forgive you, because this will give me eternal glory.”

For a long time, we will say that, for centuries, the Cristobalito child was venerated as a deity and was for centuries “venerated” as a saint within the community of Atlihuetzia, in the municipality of Yauhquemecan.

But unfortunately its history was being forgotten by its inhabitants. Until finally the Bishop of Tlaxcala, Luis Munive y Escobar, found a picture that he had written: “Venerable Cristóbal”, and this made him get to work, in the compilation of all the information on this subject.

The result of this investigation and collection of information is what is known today as: “History of the child martyrs.” The exemplary life of Cristobalito is today widely publicized in the community and throughout Mexico.

Antonio was the grandson of Xicoténcatl, therefore, when he grew up, he would be Lord of Tizatlán, his birth can be located between 1516 and 1517 and he was tortured until he died in 1529, for things in life, at the same age as Cristóbal between the twelve to thirteen years. And Juan was a servant of Antonio

According to the story, two long years had passed after the death of Cristobalito, as they affectionately called the boy Cristóbal. Arrived in Tlaxcala, a friar of the Dominican order named Fray Bernardino Minaya, accompanied by another friar, they went to the town of Huaxyacac.

The Dominican friars asked Fray Martín de Valencia to send them some children to help them in the catechism work and serve as interpreters. Fray Martín, out of fear for the safety of the boys who were in his company, refused such a request.

Despite this, Antonio and Juan offered to accompany them, and after so much insistence, they obtained Fray Martín’s permission. But they were warned that they had to be very careful, since they would run many dangers. Since it would not be an easy task to evangelize a people, who idolized other gods.

Arriving at a very close village, Antonio set out to collect the images of idols that the indigenous people had inside their houses. Meanwhile, outside the houses, Juan was in charge of destroying them with a stick. When the men of the town realized what Antonio and Juan were doing, they ran towards them and severely beat Juan, for being the one outside.

Hearing Antonio, all the crowd outside the house came out, and found that horrible scene, but he plucked up courage and confronted them saying: why have they murdered my friend, if it was me who gave the order? words did not matter much to them, and they also killed Antonio.

They then grabbed both bodies and threw them off a nearby boulder. When the bodies were recovered, they were buried in a chapel where mass was celebrated in Tepeaca.

The bishop of Tlaxcala, Monsignor Luis Munive y Escobar in 1982 introduced the cause for the beatification of the child martyrs of Tlaxcala. And they were beatified on May 6 by Pope John Paul II, during a visit to Mexico in 1990, the ceremony took place in the Basilica of Guadalupe.

The Mexican Episcopal Conference, in November 2015 declared them as the Patrons of Children of Mexico. In May 2016, the status of Patrons was confirmed by the Congregation for Divine Worship and the Discipline of the Sacraments.

The Canonization of the child martyrs of Tlaxcala , was approved by papal decree, by Pope Francis, to the indigenous Mexican children Cristóbal, Antonio and Juan, who were murdered in 1527, the first and the other two in 1529, for professing the faith Christian.

Cardinal Ángelo Amato, who is the Prefect of the Congregation for the Causes of Saints, said at Mass on October 15, 2017, in Saint Peter’s Square, that they did not need to prove any miracles. Because the simple fact, of having been killed in the name of Jesus, was more than enough for a case of martyrdom.

This phase lasted approximately fourteen months of intense work, since the evidence and information gathered in Mexico had to be sent to the postulator, such as: the historicity of the martyrdom of Cristóbal, Antonio and Juan; the devotion that the people of God have towards children; the iconography; the testimonies of the favors requested from God through his intercession and the testimonies of the thousands of favors granted.

On March 21, in their ordinary session, all the cardinals and bishops, who make up the Congregation for the Causes of Saints, made an assessment of the Positio super canonization of the Child Martyrs, and their assessment was positive. Then giving due communication to Pope Francis, who immediately ratified the decision and gave the authorization for the Canonization.

Along with the child martyrs of Tlaxcala, 32 other saints were canonized, and in his homily, Pope Francis expressed that it was necessary for us to live holiness daily, since, if this is not done, we will remain in the same place.

When the declaration as saints was being made, the bells of the Church of the state of Tlaxcala rang. And the same action was replicated in the Convent of Charity in Huamantla, the Basilica of Mercy in Apizaco, in the Parish of Santa Ana in Chiahutempan, and in Atlihuetzia.

Holy Trinity, I deeply venerate your generosity and infinite majesty, for the firmness that you granted to the children Cristóbal, Antonio and Juan, who, at the beginning of the evangelization of Mexico, and despite their young ages, filled with immense love for carrying the word of your kingdom and without stopping to think about the fear of suffering.

With their verb and their martyrdom, they inherited an example of an unbreakable and sincere faith. For the preference you had for these children, confer the special grace that, through their intercession, I ask of you (make your request). And his prompt canonization, if it is for your greater glory.

At the end of the petition prayer, believers should pray the Our Father, Hail Mary and Glory Be.