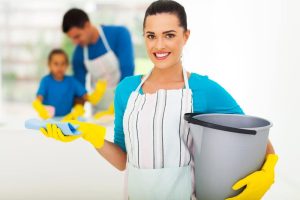 When you have a home and you are the one who must take control, you have to be prepared for everything, it is the most difficult job in the world, it takes 24 hours a day, and it is undervalued. If you want to know in an easy and simple way, everything about the concept of a housewife, what it is, the woman, characteristics and much more, do not stop reading it.

When we speak of the term Housewife , we refer to that person, be it a woman or a man, whose main task is to carry out all the daily household chores.

She spends a large part of the day cleaning the house, taking care of the children, washing the dirty clothes, taking the children to school, buying the necessary food, helping with the children’s homework, preparing meals, managing the family budget correctly, takes the children to the pediatrician, among other activities.

Despite the fact that the work carried out by the housewife is like that of any other profession, it is not paid and sometimes is not valued by the rest of the family group.

For decades, the image of the housewife referred to a woman who spent much of her time doing household chores. On the contrary, the male figure was the one who provided for the sustenance of the family. Currently, women have moved into positions that were reserved only for men.

Similarly, given the overwhelming performance of women in tasks outside the home, men have seen the need to share roles in the home, which were previously assumed by the woman of the house.

What is the origin of housewives?

From then on, man ceases to be a nomad and decides to settle in a fixed and safe place to live. That is to say, the term ” house ” was established , it became a priority that there be a representative of the family group, who was capable of meeting all the needs that this new form of family settlement would demand.

From there, this invaluable trade is born, which from its genesis had to be assumed by women. For this reason it is considered among the oldest of humanity.

Since the time of the caves, man was the one who had the supremacy of the human race, he was in charge of carrying out the tasks that required greater strength. Among the functions that he had, was to provide the family with animal protein through hunting and fishing, he collected some essential vegetables and greens. While the woman waited at home.

Analyzing the above context, societies have always seen household chores and the housewife as activities that require minimal effort.

Despite how frowned upon, misunderstood and unpaid, the role of housewife is a very rewarding activity, being able to be present in the growth and learning process of children. If it was your choice to be a housewife, it is convenient that you learn to enhance some skills. We mention them below.

As there are many household chores, it is essential that you be an organized and intelligent person, in order to keep the home in proper balance and all the energies of the house can flow.

Another of the essential characteristics that a good housewife must have is knowing how to manage the family budget responsibly. It depends on there that everything develops with absolute normality in the house. Allocating the necessary item to cover each of the needs is the pillar for the family to grow in absolute harmony.

Roles of the housewife

In general, the role of housewife is occupied by women, and in societies where Machismo is worshiped , it is much more marked. Everyone, absolutely everyone expects a housewife to give everything for everything, to be selfless, selfless, protective and to put their well-being and health first, to maintain the integrity of the family.

In more recent times, and due to changes in cultural patterns in many societies, these roles within the home have been positively affected. Currently, there are more men who accept to play the role of housewife, either because of the desire to collaborate or for economic reasons.

With the strong incursion of women in the labor field, they have seen the need to delegate functions to their husbands, in exchange for taking charge of supporting the family. Other reasons for this change in roles, although not as common, is the parents’ desire to enjoy their children’s growth.

Next, we mention some of the roles that the housewife or husband must handle.

Many defend the thesis that these domestic workers should receive a salary for such commendable work. Scholars of economic phenomena affirm that the value of the work of housewives is not considered within the statistics of economic production. For example, for the consumer price index, the gross domestic product (GDP), or for employment statistics. Who works as a housewife, work many hours a week, without being considered, and depend on the salary of the husband or partner.

For years, the man has been considered as the one who provides the family sustenance. The work he did was hunting wild animals, cultivating agricultural items, or earning money in different tasks, while the women had to stay at home, taking care of the children, washing and cooking.

In some aboriginal societies, women, in addition to the role of caring for the home, also have the task of gathering fruits and vegetables, while men are dedicated to hunting and fishing.

In rural areas, whose only means of sustenance is agriculture and livestock, women are responsible for some tasks in the fields and animals, which they keep in cages or around the houses.

Some of the tasks that women could perform in traditional societies, in addition to caring for children, would be:

It is common that, in this type of society, the activities to generate economic income revolve around work in carpentry, mechanical, and electronic workshops, among others. As well as jobs in warehouses, stores, schools and in government offices.

Sometimes, if the family had their own business, the woman, in addition to doing the housework, also helped with the activities of the family business.

With the arrival of industrialization, and the increased demand for labor, many housewives found it necessary to work outside the home, but without abandoning their responsibilities with the family. It was an opportunity to help the family economy.

During the first and second world wars, many men were conscripted, so many of the women were forced to go out to work in factories, in order to support their children. More than on a whim, they had to do it out of a sense of preservation.

Since then, women have been occupying relevant positions, thanks to their dedication, professionalism and academic skills. That made her earn that seat of honor in our society.

To be a good housewife, it is essential that you make a great effort and have the greatest of commitments. It will be necessary to put all your qualities into practice, at the service of achieving the stability and harmony that you long for in your home.

The advantages are many, some will feel empathy, while others will not. However, we present some of them.

One of the greatest satisfactions that a housewife has is being in permanent contact with the growth stages of children. They do somersaults to keep them healthy and well fed, and they can also keep an eye on their homework.

But currently this is not the common denominator, since many women have found it necessary to go out to work, either because they help the family budget or because they are mothers who have been left alone in the responsibility of raising their children. children.

One of the advantages that housewives also enjoy is that, unlike other work activities, in housework, there are no strict schedules or fussy superiors. You can have total freedom. to make a distribution of the activities of the house and the personal ones.

Knowing how to properly distribute your home work time. You can have time for personal use, and dedicate it to professionalization, through online courses or activities, that are to your liking, in addition to the fact that they were always your great passion.

As a housewife, you should not limit yourself in your aspirations. You can, in parallel, carry out that business venture that has been hanging around in your head. It is time for you to get to work, and from the comfort of your home, project it. This dream can be, to carry out pastry work, crafts, online sales, among others.

Everything in life has a cost, being a housewife also brings adverse situations.

Despite working hard at home, this is the biggest source of frustration. There is no compensation for such hard work. You feel helpless for not being able to have the resources to buy toiletries and personal beauty, just to name an example.

It is no longer very common, but some Eastern societies exclude housewives, considering them of low category. And it does not require great efforts to do it.