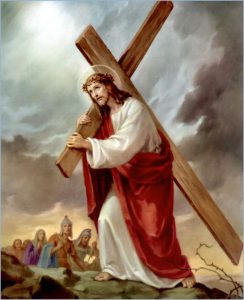 The Sorrowful Mysteries of the Holy Rosary tends to choose certain moments of the Passion of Christ, coming to institute to believers that each and every one of them speaks of the revelation of great love and the source of salvation of believers through Christ.

The sorrowful mysteries or Holy Friday Rosaries make the believer go and relive the death of Jesus by placing them at the foot of the cross of Calvary next to his mother Mary, so that together with her he penetrates the enormous amount of love of God towards man. and being able to feel all its full regenerative force in our being.

To begin these Sorrowful Mysteries, the first thing to do is make a Creed, an Our Father, 3 Hail Marys that are for faith, charity and hope, a Glory.

Before beginning with the prayers and reflections on the Sorrowful Mysteries of the Holy Rosary, one must begin with an opening prayer, which is as follows:

In the name of the Father, and of the Son and of the Holy Spirit. Amen.

Oh God!, your only and true Son has achieved for us through his death and resurrection the goods of the great eternal salvation: we ask you to grant us that, venerating these sorrowful mysteries in the Holy Rosary of the Virgin Mary, we can imitate what they come to contain and we can obtain what they promise. In the name of Jesus Christ our Lord. Amen.

First Sorrowful Mystery: The Agony of Jesus in the Garden

The Biblical Quote that speaks of this Sorrowful Mystery is the following, found in the book of Luke chapter 22 from verses 39 to 44, which says:

“He went out and went, according to his custom, to the Mount of Olives. His disciples accompanied him. When he arrived at the place, he told them: Pray not to fall into temptation. He moved away from them about a stone’s throw, knelt down and began to pray, saying: Father, if you want, take this cup away from me, but not my will, but yours be done. And an angel from heaven appeared to him comforting him. He went into agony, and prayed more earnestly; he sweated like drops of blood, which ran on the ground”.

This kind of struggle and victory only became possible thanks to the prayer that our Lord Jesus performed. Through the prayer made, Jesus manages to be the winner of the Temptation, from the beginning and in the last combat of his agony.

While reflecting on the first sorrowful mystery, you can perform an Our Father, 10 Hail Marys and 1 Glory Be. And proceed to make the following prayer:

Oh my Jesus, I ask you to forgive all our sins, to free us from the fires of hell, that by your infinite mercy our souls may be taken to heaven, especially all those who are in great need of your great mercy.

Oh God, great, omnipotent and merciful, who being in the Garden of Olives you abandoned your Son in a most bitter agony to be able to atone for the sins of all the men of this world; he converts to you, the supreme goodness, our fragile wills so that in this way, detesting sin, we can convert to holiness and justice. Through Jesus Christ our Lord. Amen.

We offer this great mystery for all the poor and for all those who tend to suffer:

So that the Lord is the one who helps them in all their needs, and they learn to be able to discover the reconciling dimension of pain and also manage to find in all the members of the Church a testimony of solidary love like that of Jesus. Amen.

Second Sorrowful Mystery: The Flagellation of the Lord

The second sorrowful mystery or Holy Rosary on Tuesday is found in the scourging of Jesus, which is found in the book of John chapter 19 verses 1 to 3, and says as follows:

“Pilate then took Jesus and had him flogged. The soldiers braided a crown of thorns, put it on his head, and dressed him in a purple robe; and, approaching him, they said to him: “Hail, King of the Jews”. And they slapped him.”

The sufferings that Jesus suffered have been taking a very concrete historical form for the simple fact of having been rejected and disapproved by the high priests, the scribes and the elders of that time, who had the task of taking Jesus to be delivered before the Gentiles, that they might mock him, flog him, and crucify him.

O God of great and infinite goodness and also of eternal justice, who came to tolerate the painful pain of the scourging of your beloved and divine Son so that through his blood men could be washed from misery; he impresses on us the sentiments of deep pain for all our sins and at the same time confirms the sincere purpose of being able to repair it generously and sincerely. Through Jesus Christ our Lord. Amen.

We offer this great mystery for the Holy Father, the so-called Pope John Paul II:

So that the Lord who has come to choose him as the successor of Saint Peter, take care of him and also help him at all times, with the purpose that he be for the Church the principle and the foundation in a visible way of the unity of faith and of communion in charity. Then pray an Our Father, 10 Hail Marys and 1 Glory be to the Father.

Another of the Painful mysteries, specifically the third, has to do with the Crowning with Thorns, that is, when the Roman soldiers came to create a crown of thorns that was placed on him after being flogged. We can find this scripture in the book of Matthew chapter 27 verse 27 to 29 that says:

“Then the procurator’s soldiers took Jesus with them into the praetorium and gathered the whole cohort around him. They stripped him and threw a purple robe over him, and plaiting a crown of thorns, they put it on his head, and in his right hand a reed, and bowing the knee before him, they mocked him, saying, “Hail, King of God.” the Jews”.

The love of God to the extreme tends to be the one that confers its value of redemption and also of reparation, in addition to atonement and satisfaction to the sacrifice of our Lord Jesus Christ. Which he has known us and in the same way he has loved us all in the offering of his life.

The great eternal wisdom of God, that you did not keep your son, our great savior, the pain and affliction of having a crown of thorns placed on him so that the sins of impurity and pride of all humanity could be atoned for in a special way ; for what you made that great sacrifice to save us from the darkness of evil. For our Lord Jesus Christ. Amen.

This sorrowful mystery is offered by families:

So that the relationships of parents with children and of husbands with wives are enlivened by love, communication and also by respect. Then pray an Our Father, 10 Hail Marys and a Glory be to the Father.

Another of the Sorrowful Mysteries is the fourth, that of Jesus with the Cross on His Back. This can be read in the book of Mark chapter 15 verse 21 to 22, which says as follows:

“And they compelled one who was passing by, Simon of Cyrene, who was returning from the field, the father of Alexander and Rufus, to carry his cross. They led him to the place of Golgotha, which means the “Skull”.

In the book of John, in the same way, you can find other Biblical Quotations that refer to this event, which says as follows:

“Jesus was left in the hands of the Jews and, carrying the cross, he went to the place called “the skull”, in Hebrew “Gólgotha”, where they crucified him”.

Oh God, that you came to manifest yourself with your great and immense love in the admirable redemption of man and that from the painful ascent to the cross of Calvary of your divine Son it was that you drew full satisfaction for the sins of all humanity; he converts all sinners to the true path, so that in this way they return to travel it, willingly accepting the weight of the cross and also the humiliations due to their sins. For our Lord Jesus Christ. Amen.

The realization of this painful mystery is for all those peoples of the earth:

So that they may be fully enlightened by the wisdom of the Holy Spirit of God, and at the same time recognize the Lord Jesus as the beloved Son that the Father came to send for the salvation of all humanity. Then pray 1 Our Father, 10 Hail Marys and 1 Glory be to the Father.

Fifth Sorrowful Mystery: The Crucifixion and Death of Our Lord

Finally, the last of the Sorrowful Mysteries, specifically the Fifth which deals with the Crucifixion and the death of Jesus on the cross of Calvary. This event can be found in the book of Luke chapter 23 verses 33 to 46, and it goes like this:

“Arrived at the place called “La Calavera”, they crucified him and the two malefactors there, one on the right and the other on the left. Jesus said: “Father, forgive them, because they do not know what they are doing” The veil of the Sanctuary was torn in the middle and Jesus, giving a loud cry said: “Father, in your hands I place my spirit” and, having said this, he expired “

The scriptures also make reference to this event in the book of John chapter 29 verses 28 to 30 and it says:

“After this, Jesus, knowing that everything had been finished, so that the Scripture would be fulfilled, said: “I thirst”. There was a glass full of vinegar there; They soaked a sponge in the vinegar, put it on a reed, and held it to their mouths. When Jesus tasted it, he said, “It’s finished.” And, bowing his head, he breathed his last.”

We implore you, O my Lord, that, by your infinite mercy, by the death of your beloved son Jesus Christ on the cross of Calvary, in supreme obedience to your divine design; so that at all times for ever and ever your justice may be worthily honored and that all men may fully enter to enjoy your presence in the paternal house. For our beloved Lord Jesus Christ. Amen.

The Sorrowful Mysteries especially this one is offered by the increase of our filial love to the Holy Mary:

So that all together loving her as the Lord Jesus comes to love her, Mary can configure us much more fully with her divine Son Jesus. Then she prays 1 Our Father, 10 Hail Marys and 1 Glory be to the Father.

To conclude with the Sorrowful Mysteries of the resurrection of Jesus, the following is done:

We conclude this prayer of the Holy Rosary addressing the Mother of our Lord Jesus, with great filial love, the prayer of Hail: God save you, Queen and Mother… Likewise, the Litanies can be prayed.

Therefore, we ask you, Lord, that we, all your servants, may enjoy the good of body, mind and spirit at all times, and through the intercession of the Holy Mary, the Virgin, we ask you to free us from the sorrows of this world and that you grant us the joys of heaven. Through Jesus Christ our Lord. Amen. In the name of the Father, and of the Son and of the Holy Spirit. Amen.