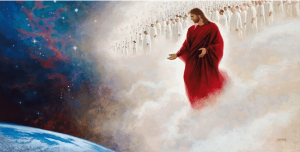 The second coming of Christ , a promise that he made to his disciples and that has not been forgotten by his Christian people. Christ, who is by our side, promised us eternal life together with his kingdom here on earth. In this article, we will find out about how and when will Jesus return?

What is the Second Coming of Jesus Christ?

The second coming of Christ is the promise that Jesus, the son of God the Father, made to his people. God is fair, loving and always faithful to his word. His first coming was when he managed to incarnate as another human being, just as the prophecy had announced to Mary by the angel sent by God.

Jesus fulfilled many prophecies from the moment of his death until his resurrection, however, prophecies such as the second coming of Christ have not yet been fulfilled, but this does not shake the faith of his people, on the contrary, they anxiously await him, with happiness and joy. Following his path and listening to his word.

In his first coming Jesus came to this world under the most humble conditions. He was the obedient servant and his ultimate purpose was to die on the cross. He represented that man that he incarnated to give his life to save us.

In this second coming, history will be very different, because Jesus will be proclaimed the conquering King and will be accompanied by his heavenly army.

In the Old Testament the prophets (and disciples of Jesus) did not make a clear distinction between the two advents. We can see this in scriptures such as Isaiah 7:14; 9:6-7 and Zechariah 14:4

Therefore, it lent itself to confusion, suggesting that reference was made to two different individuals, and not to the same Messiah who would exercise both roles, that is, that of suffering messiah and that of messiah as conquering king.

Jesus fulfilled his role as “suffering servant” in his first coming and we can see it clearly in Isaiah chapter 53). And Jesus will fulfill his role (and his promise) to him as King and deliverer of his people Israel at his second coming (we see this in Zechariah 12:10 and Revelation 1:7).

The people of Israel and the entire world will be able to witness this fulfilled prophecy and will regret not having accepted Jesus as their King that first time he incarnated in our world.

Acts 1:11 tells us that the angels told the apostles (who were looking at the sky) that Jesus, just as he had been taken by heaven, would come again but as a King.

Zechariah 14:4 mentions the Mount of Olives as the place chosen by Jesus for his second coming to earth.

How will Jesus return?

Matthew 24:30 tells us that a sign will indicate that the Son of man is once again among us, and all the tribes and men will witness how the King of Kings, the messiah, will manage to descend from the clouds in a way glorious, and they will regret not having received him sooner.

2:13 recounts the second coming of Christ as a “glorious appearing.”

In Revelation 19:11-16 it is described in great detail as a completely open sky, where a beautiful white horse can be seen, ridden by the Son of God himself, whose eyes burned like “flames of fire”.

And with his clothes stained in blood, he had a name written: The word of God, a name that no other man knew. And his heavenly angels will guard him, clothed in the whitest, finest, and cleanest linens, and followed by his white horses.

And Jesus, with a sword that will come out of his mouth, will unleash the wrath of Almighty God, with a hard hand and on his hand and thigh he will have written “King of kings” and “Lord of lords”.

Luke 21:27 tells us that Jesus will descend from the clouds with great power and in a glorious way, and will be proclaimed by his people as “King”.

Revelation 1:7 also tells us that even those who tortured him will come to see him and repent for committing such a deadly sin.

What warning did Christ give so that we are not deceived about his second coming?

The rapture and the second coming of Christ are different events that should not be confused, and we can appreciate this more clearly in the Holy Bible, in 1 Thessalonians 4:16-17, it tells us:

That after the trumpet played by God himself, he will make his son manifest descending from heaven and everyone who has died in his name and loving him until his last breath will rise first.

Then, the living will follow, and finally, those who remain will be raptured and invited to receive and enjoy eternal life, paradise, the land promised by God.

The bible also tells us in Matthew 24:27 that the second coming of Christ will be like lightning, it comes out on one side, and it shows up on the other.

Christ himself tells us not to believe in false prophets or false announcements that the son of man is here, in the chambers or in the desert.

He warns us not to believe in any of this, even in false “signs” due to the need of man to be the one who announces him, because the messiah does not need announcements from any prophet, when the time comes, we will know it and we will all be able to appreciate him. and surrender to his greatness.

No one but the Father knows when this second coming of his son will take place, not even the angels themselves, know such information, but when it happens, it will ultimately be glorious and will not go unnoticed (Matthew 24:36).

Jesus recognizes laziness as a human condition, therefore, He invites us to remain vigilant, since we do not know the hour or the day of the second coming of Christ (Matthew 24:42).

How will the second coming of Christ be and how will it not be?

With the latter, Jesus warns us that we must be especially careful, because even the evil one himself will want to be announced as “King” and will want us to think that he is the true Christ.

Saint Paul warns us about this, expressing that a man without law and full of sin will appear, who will want to be announced as “king” so much that he will perform miracles and will use thousands of tricks to make us believe that he is the same God.

And in fact, he will manage to seduce those lost souls who decided not to believe in God neither in his first coming nor in this one, and they will fall for his charms and tricks, but despite this, he will not be able to imitate the second coming of Christ true.

We must not let ourselves be deceived, because the coming of the only true Son of God will be “surprising, instantaneous and glorious.”

Why is the second coming of Christ delayed?

II Peter 3:8-9 tells us that for God a thousand years can represent just one day, but we must not lose faith, because his word always fulfills and we will be witnesses of his prophecy. Perhaps, his reason why “it takes so long” is his fervent desire that we all repent and enjoy eternal life with him and his infinite love.

How should we live while waiting for Jesus?

Titus 2:11-14 clearly explains how to prepare for the second coming of Christ ? We must live humbly and righteously and not give in to our worldly desires and wait patiently.

It invites us to joyfully await the second coming of our Lord, who gave his life for us and our salvation.

Matthew 24:37-39 tells us that the second coming of Christ will be similar to Noah’s episode with the ark, in which no one understood the purpose of the ark until they were faced with the flood and it destroyed everything in its path.

Will the coming of Christ be a time of reward?

Matthew 16:27 and Revelation 22:12 show us that the Son of God will come accompanied by his angels and each one will then be judged and rewarded according to their works.

At the second coming of Christ we will experience in a real way what was the purpose of our salvation.