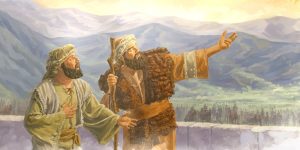 Do you know how many prophets are in the bible?   If you still do not have an answer to this question, do not worry, you have come to the right place since in this post we will take care of clarifying each and every one of your doubts. Just do not stop reading the post that you will like.

How many prophets are there in the bible ?

To begin we are going to describe that the word prophet refers to a person of religious belief who is in charge of being the intermediary between humanity in general and the divine representation. Based on what the facts tell us, it can be said that a prophet is a person who maintains a close personal relationship with God and from his hand receives the mission of professing and making known or communicating among other people the revelations and actions of God. God and, as a consequence, speaks on his behalf to human beings.

The prophet as a messenger of the word of God before his people, has certain qualities that characterize him as an intercessor of humanity with our Heavenly Father. The prophets with their charismatic way of leading the people and communicating the word of God in every corner, it can be said that each prophet receives the gift to carry out his mission.

The prophet definition is mainly used to describe the person who is in charge of predicting the events that will take place in the future respectively, and these people manage to predict these events or events through signs or based on some supernatural revelation that may come to them.

It may be the case that the prophets are compared or confused with a seer, however, we have to keep in mind the qualities and characteristics of each one to be able to differentiate them, since the prophets, as mentioned, are the ones in charge of professing the word of God.

It is important to highlight that the word prophet derives from the Greek profētēs (προφήτης, and that means or has the meaning of messenger, spokesperson or political incident. In the use of this word we must keep in mind that it is closely related to the monotheistic belief of the Hebrews through , the word nabí a term that was gradually introduced and used by the Jewish, Christian and Muslim cults.

The minor prophets are a total of 12, and they for their part wrote few pages of the bible. The prophets generally lived between 500 and 750 BC

The classification of the prophets is formed by means of the message that each of them came to transmit, and to whom they imparted this message of our Lord Jesus Christ. It should be noted that the most important prophets to predict for Israel were; Amos and Hosea. In this way it can also be mentioned that two other prophets were sent to Nineveh, in order to take their message to all the inhabitants of this town and to reach the message that God sent to each of his children who lived in the mentioned place. , these prophets were known as Jonah and Nahum.

For his part, Daniel, one of the major prophets, was sent to Babylon with the mission of professing and bringing God’s message to the inhabitants of this City. And in the same way Ezekiel, another of the major prophets, was also sent to Babylon, but he with the mission of professing the Word to the people who were prisoners in this City.

It can also be mentioned that God sent a large number of prophets to the Jewish nations so that they would carry his message to all Jews. In total there are 9 prophets who were sent to those nations with a great mission, these prophets are; Joel, Isaiah, Micah, Jeremiah, Habakkuk, Zephaniah, Haggai, Zechariah, and Malachi.

In this way it can be mentioned that the prophets that are embodied within the bible and those who were in charge of carrying the word of God and its message to every corner, in total there are 16. If it is within your plans to start with the study of the bible it is important to know each of the prophets that make up the bible, since each of them are an essential part of the expansion of faith in God.

Now we are going to describe each of the prophets according to their classification:

There were 12 minor prophets corresponding to the Old Testament, who were attributed books in the Bible called by their same names, which will be described below:

Hosea:   He was a prophet of the old testament, who belonged to the group called himself the twelve minor prophets, Hosea was born 800 BC and respectively it is known that he died 725 BC. Within the books this prophet is the first that we can observe, his name means Yahweh saves.

Respectively, this prophet is credited with being the author of the book of the old testament Hosea, in his book he denounces the infidelity of the People with Yahweh and also within the book highlights the tender love of God that he has for each of his children. The mission of this prophet was to carry the entire message of God through Israel despite the rampant sin in which this people lived.

Joel: He is the second of the minor prophets, his name means Jehovah is God. He is the author of the book of Joel that is found in the old testament, so this book is known to have been written between 835 and 800 BC, respectively. C, the purpose of writing this book was hampered by the invasion of locusts which destroyed absolutely everything in their path as; gardens, vineyards, grain fields and trees.

The mission of this prophet was to carry the word of God throughout Israel, God specifically sent this prophet to show all these people about their future and particularly “The Day of the Eternal”.

Amos:   This prophet was well known for being a shepherd and producer of figs, Born in the Kingdom of Judas in 750 BC This prophet is credited as the author of the book that bears his name, his name means “Charge” or “Charger ”.

Obadiah:   His name means servant, servant, or worshiper of Yahweh, he is the author of the book that bears his name, it is the shortest of the entire Old Testament, it has only approximately 21 verses.

Jonas : His name means “dove”, in Latin Ionas, belongs to the prophets of Yahveh, corresponding to the Old Testament. He is said to be the fifth of the minor prophets of the Nevi’im, and the scriptures reveal that he is the son of Amitai. He managed to restore ”the boundary between Israel, from the entrance of Hamat, to the Dead Sea.

Micah : This was a peasant prophet from exactly the end of the 8th century BC. C., originally from a village in the plain of Shefela Moreshet, which is located near Jerusalem. He was the writer of the book of the Bible that bears his name.

Nahum: was one of the minor prophets, a native of Galilee. He is known for writing the Book of the same name, one of the many books belonging to the Old Testament. He is the seventh in the list of the prophets according to the traditional list. In his own Book it is said that he was an “Elkesite” or “Elkoshite”.

Habakkuk : This belongs to the name of a Hebrew prophet and in the same way to the book of the Bible that also bears the same name and that according to studies was written around the year 612 BC.

Zephaniah: belongs among the list of the minor prophets of the Old Testament to the ninth, according to the scriptures he is the son of Kusí, of the tribe of Simeon. He began the prophesying of it in the reign of Josiah of Judah (c. 624 BC), possibly before the king reformed the disorders of his nation Haggai.

Zechariah: is one of the prophets mentioned in the Bible, being the eleventh, and in turn in the Koran. In the Bible he corresponds to a priest of the family of Aaron (Luke, 1: 67-79) and father of John the Baptist. He was the husband of Elizabeth, who was a relative of Mary (Luke 1:36), the mother of Jesus.

Malaquías: name that means my angel, my messenger or my envoy. It belongs to one of the books of the Old Testament in the Bible and the Tanakh (Jewish religion), which was written by the same prophet bearing his name, being the last of the prophets in the list of minors.

As previously mentioned within the text, they are the ones who were in charge of writing most of the Bible, we are going to know a little more about them:

Isaiah: His name means Yahveh is salvation; he is the first of the major prophets. The mission of this prophet was to carry the message of our Lord during the crisis that arose from the expansion of the Syrian Empire.

Isaiah is born in the town of Jerusalem within 765 BC, so it is presumed that this prophet is supposedly killed by King Manasseh in 695 BC

Jeremiah:  His name means “prophet” to the one who brings messages from God, he is the second of the major prophets. From what is known of this prophet he was the son of a priest, he was born in Anatoth 655 BC

Jeremiah’s mission was to prophesy and bring a message of repentance to the entire kingdom of Judas, but primarily to the so-called kings of the time.

Ezekiel: The name of this prophet means God is my strength, he is credited with writing the authorship of the book that bears his name, he was the son of a priest from Jerusalem.

The mission entrusted to this prophet was to completely eradicate bad customs, idolatry and any misconception that may exist about the prompt return to Jerusalem.

Daniel:  His name means God is my judge or God’s justice, he is the fourth of the major prophets, he is the author of the book that bears his name in the Old Testament, his main mission was to bring God’s message to each of the inhabitants of the city of Babylon respectively in full destruction of Jerusalem at the hands of Nebuchadnezzar. It is credited to this prophet that he was also the first to lead Jews to Babylon.

Mission and message of the prophets in the Bible

Regarding the previous description of each of the prophets, we can now talk about the mission and the messages that each of them wanted to convey in the Old Testament Bible writings.