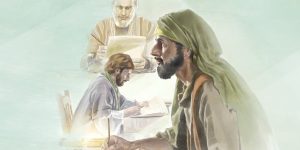 Much is said about who is the author of the Bible; there are many uncertainties because being written by followers of God, unbelievers question the veracity of the scriptures, since they were made by human thoughts guided by God. If you are interested in knowing the reality of what is said, continue reading.

Who is the Author of the Bible?

The Bible truthfully presents who was present in its writing. Some fractions address and begin with phrases such as the following “the words of Nehemiah”, “the vision of Isaiah” and “the word of the Lord that occurred to Joel” (Nehemiah 1:1; Isaiah 1:1; Joel 1 :1). Many stories charge Gad, Nathan, and Samuel as presented (1 Chronicles 29:29). The preambles of certain psalms reveal the identity of their composers (Psalms 79, 88, 89, 90, 103 and 127).

Since men were used to write the Bible, the irreligious maintain that the Bible is absolutely beneficial to human knowledge, as is any other vulgar book. That is why many wonder: Is your argument solid?

What is the Bible?

Before knowing who really was the author of the Bible, we have to know a little about this wonderful book, which is a compilation or a repertoire of sacred books, which holds the stories, doctrines, codes and traditions that allow the orientation of Christians , based on the Jewish tradition (Old Testament) and the proclamation of the Gospel (New Testament).

For knowledge we can say that the Bible is a word originating from the Greek word βιβλίον (biblíon), which has as meaning scroll, papyrus or book, and in turn belongs to the Greek expression (ta biblia ta hagia), which means sacred books.

Before knowing who the author of the Bible is, it is necessary to know all the details related to this Book that reveals the word of God through prophets.

To summarize who is the author of the bible, we can say that it was written by around 40 authors, from different professions, in an approximate period of 1,500 to 1,600 years, it consists of 1,189 chapters, which was written on 3 continents, and therefore course in 3 languages, containing 66 books that constitute a whole.

It is considered the most printed book in history, where everything is concentrated on Salvation through our Lord Jesus Christ, there is no other book that details and contains these characteristics, and even so despite the unbelievers who claim that it is human writings and not by divine messages, no message or doctrine has been found that contradicts it, do you still doubt that it is of divine inspiration?

After all this information they wonder, who wrote the Bible? There is one author who is the most important – God Himself. How did he do it?

But first of all know this, that no prophecy of the Scripture is a matter of personal interpretation, since no prophecy was ever given by an act of human will, but men inspired by the Holy Spirit spoke on behalf of God.

The Holy Spirit communicated through the authors of the Bible through visions and messages. For this reason they were the ones who wrote as human beings, but the Holy Spirit guided all their writings.

And the words of the Apostle Paul:

All Scripture is inspired by God and useful to teach, to reprove, to correct, to instruct in righteousness, so that the man of God may be perfect, equipped for every good work.

Forty writers and one Author

To find out who is the author of the bible, we tell you that the vast majority of the writers of the Bible accepted having made their writings in the name of Jehovah —the only true God— and in the same way that they were governed by him or by a angel (Zechariah 1:7, 9). The prophets of the Hebrew Scriptures proclaimed more than forty times: “This is what the Lord has said” (Amos 1:3; Micah 2:3; Nahum 1:12).

Many of his writings begin with messages such as “the word of the Lord that happened to Hosea” (Hosea 1:1; Jonah 1:1). Relating them to the prophets of God. For his part, the apostle Peter showed: “Men spoke from God as they were carried away by holy spirit” (2 Peter 1:21).

It is for this reason that the Bible is at the same time a combined and consolidated book, written by numerous men who showed that behind their work there was the will and the word of God. In other words, God used ministers of the word to establish his thoughts. For this reason, below we will show who were the forty writers of the Bible and how did he do it?

Who is the author of the bible? Inspired of God

“All Scripture is inspired of God,” the apostle Paul clarified (2 Timothy 3:16). The Greek expression translated “inspired of God” means exactly “God-breathed,” which means that he worked the minds of the human ministers of the word, through an intangible force in communicating his true message to them.

On the other hand we know that the Ten Commandments were actually written on stone tablets by Jehovah himself (Exodus 31:18). There were times when God imposed his message only on his human servants, as we read in Exodus 34:27: “Jehovah went on to say to Moses: ‘Write these words down for yourself…’”.

On other occasions, God managed to make men discover in visions the things that he really wanted them to record in the scriptures. Ezekiel said, “I began to see visions of God” (Ezekiel 1:1). Likewise, “Daniel beheld a dream and visions of his head on his bed.

At that time he wrote down the dream” (Daniel 7:1). As for the last book of the Bible, called Revelation, God communicates by the same means through dreams and visions with the apostle John, who later wrote: “By inspiration I came to be in the day of the Lord, and I heard behind from me a mighty voice like that of a trumpet, saying: ‘What you see, write it on a scroll’” (Revelation 1:10, 11).

The Human Touch in the Bible Scriptures

As for who is the author of the Bible, it is important to highlight that divine illumination did not invalidate the intimacy and individuality of the writers; since capturing in writing the messages that came from God required a personal effort from them. For example, the teacher of the book of Ecclesiastes “sought to find the delightful words and the writing of the correct words of truth” (Ecclesiastes 12:10).

To compile his historical narrative, Ezra examined at least fourteen sources, including “the account of the affairs of the days of King David” and “the Book of the Kings of Judah and of Israel” (1 Chronicles 27:24; 2 Chronicles 16:11). Luke the evangelist ‘investigated all things accurately from the beginning and wrote them in logical order’ (Luke 1:3).

Many biblical books reveal aspects of the personality of their writer. For example, Mateo Levi, who was a tax collector long before he became one of Jesus’ followers, paid exclusive attention to numbers; it is for that reason that his Gospel is the only one that specifies the price for which Jesus was betrayed, namely “thirty pieces of silver” (Matthew 27:3; Mark 2:14).

Luke, in acquiescence to his profession, provided concrete medical details, using words like “high fever” or “full of leprosy” to recount the condition of some of the sick whom Jesus healed (Luke 4:38; 5:12; Colossians 4: 14).

It is in this way that Jehovah often left the writers to speak in their own words and in their own style, although he controlled his mind to ensure that the text was faithfully transmitted as its message had been (Proverbs 16:9).

Isn’t it amazing that forty men will write a divinely coherent book, with a perfect and uniform thematic thread, after it is written in different lands over sixteen hundred years? Such a result would have been incredible if all the writers had not been guided and used by a single Author called God.

Other questions that researchers ask themselves, apart from who is the author of the Bible, is that, Was Jehovah obliged to use men to write his Word? Well, the answer is No, but he forged it as an exemplary model of all his wisdom . In fact, part of the universal charm that this book possesses resides in the indisputable quality of how its writers express the full range of human emotions, including the feelings of guilt of the repentant sinner who asks and implores divine mercy, as in the case of King David (Psalm 51:2-4, 13, 17, heading).

Although Jehovah used human writers, we can believe in their work as much as the early Christians, who recognized the Holy Scriptures “not as the word of men, but, as it certainly is, as the word of God” (1 Thessalonians 2 :13).

Curiosities of the bible scriptures

There are many questions that are asked about who is the author of the Bible and its writings, so much so that studies have developed concerns according to its authenticity, it is through these concerns that curiosities such as:

As a conclusion of who is the author of the bible, we can say that although the writings were made by human thoughts, they have great value since through verses it is evident that all the words of the forty writers were inspired by God and through their messages and visions, so here are some verses that talk about the inspiration of these scriptures.

All Scripture is inspired by God and useful to teach, to reprove, to correct, to instruct in righteousness,

And the LORD warned Israel and Judah by all his prophets and by every seer, saying, Turn from your wicked ways, and keep my commandments, my statutes, according to all the law that I commanded your fathers and sent you for through my servants the prophets. However, they did not listen, but stiffened their necks like their fathers, who did not believe in the LORD his God.

However, you put up with them for many years, and warned them with your Spirit through your prophets, but they did not listen. Then you delivered them into the hands of the peoples of these lands.

He said* to them: Then how is it that David in the Spirit calls him “Lord,” saying, “THE LORD SAID TO MY LORD, `SIT AT MY RIGHT HAND, UNTIL I PUT YOUR ENEMIES UNDER YOUR FEET’”?

David himself said by the Holy Spirit: “THE LORD SAID TO MY LORD, `SIT AT MY RIGHT HAND, UNTIL I PUT YOUR ENEMIES UNDER YOUR FEET.'”

Of which we also speak, not with words taught by human wisdom, but with those taught by the Spirit, combining spiritual {thoughts} with spiritual {words}.

God, having spoken long ago, on many occasions and in many ways to the fathers through the prophets, in these last days has spoken to us by {his} Son, whom he appointed heir of all things, through whom he also made the universe.

Concerning this salvation, the prophets who prophesied of the grace that would come to you, diligently inquired and inquired, seeking to know what person or time the Spirit of Christ within them indicated, in predicting the sufferings of Christ and the glories that would follow .

But first of all know this, that no prophecy of Scripture is {a matter} of personal interpretation, since no prophecy was ever given by an act of human will, but men inspired by the Holy Spirit spoke on behalf of God.