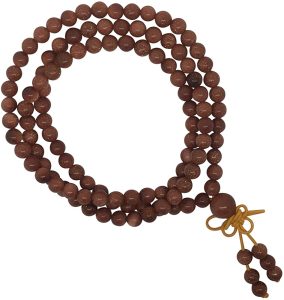 The Hindu Rosary is a rosary with special characteristics that has 108 beads, we invite you to learn today about the Hindu rosary, we will comment on its history and we will teach you how to use it, your prayers will be heard and you will be able to receive the benefit of them by making use of the Hindu rosary.

The Hindu rosary is called yapa mala in its native language, its name has a meaning very much in line with its use, since it already means speaking or saying in a low voice. The term appears for the first time in the middle of the first millennium before Christ, in the Satapatha-brahmana, which is a Sanskrit Hindu religious text written in prose, where the Vedic rituals are indicated, and also in the Aitareya-brahmana, an associated brahmana book. with the Rigveda.

For its part, mala is translated as garland, based on the Sanskrit dictionary of Monier Williams, a British scholar. There are religious objects that have a resemblance to the Hindu rosary, such as the rosary of the Catholic religion, the Christian prayer cord, also in the Muslim religion is the tasbih, which are used to guide prayers and petitions.

The Hindu rosary is made using sandalwood or tulasi preferably, but we can find them made with any other type of wood, semi-precious stones or rudraksha seeds, a plant from Nepal, the Himalayas and other places with a similar climate.

The distribution of each of the basins is achieved by making a knot between bead and bead, after the first eight beads, a thread is tied that allows the separation between the eighth and ninth beads. It is made up of 108 beads and these can be engraved with the main names of the god Vishnu, the Hindu God of preservation and kindness.

In account number 54 an additional account is placed that has a plume made of threads, which marks the middle of the Hindu rosary, however, it is clearly divided into equal parts since it is also marked in account 27 and in account 81.

The Hindu rosary is used by Buddhists, especially in Tibetan schools where it is used for the recitation of mantras. In the Buddhist religion the number 108 refers to the mental obscurations that interfere with the sight of a Buddha.

The number 108 of the kleshas, ​​as the obscurations are known, comes from multiplying by the 6 senses, the 3 forms of experience, which we recognize can be positive, negative or neutral, which gives us 6 x 3 = 18.

Let us remember that the human being spiritually speaking is made up of the six senses, sight, hearing, smell, taste, touch, plus the mind, which is the sixth sense. We multiply this number 18 by 2, which are the ways of feeling the experiences, which are with aversion or with pleasure, this generates the number 36. Then we multiply it by 3, which are the times lived, to live and the one that you are living, which does not give the number 108.

When people are able to overcome these 108 kleshas, ​​they are said to attain the level of enlightenment or Nirvana. It is a divisible number, which is divided into three equal parts because it represents the past, the present and the future, the three parts that must be purified, which are the body, speech and mind, the three poisons that must be eliminated. which are hatred, liveliness or greed, and ignorance.

What is the Japa mala or Hindu Rosary used for?

A Hindu rosary or Japa Mala symbolizes the thread of life, it is a circle made up of 108 kleshas, ​​in which one of the accounts is highlighted with a plume, to recognize in it the abode of the Gods, also called Guru. The Hindu rosary is used as an object that allows and facilitates meditation practices because it helps to focus the mind. The Hindu rosary can be hung around the neck like a necklace or rolled up in our hand, with which the prayer or japa recitation is performed.

The use in its elaboration of the wood of the Bodhi tree is based on the fact that it was in a tree of that species that the historical Buddha reached enlightenment. In Sikhism, an Indian religion founded by one of the first gods, called Guru Nanak, they make use of the Hindu rosary by repeating the name of God or by repeating a mantra.

Some bring the colors of the 7 chakras, which helps to focus on the energy centers. The Buddhist rosary is also widely used by people who practice bhakti yoga, it is a spiritual path within Hinduism that focuses on devotion to any personal deity.

To pray with the Hindu rosary, certain forms must be respected, such as taking the rosary with the right hand and with the thumb that represents the universal consciousness and the middle finger that represents the heart. Take one of the beads that is subsequent to the bead that has the plume protruding from the necklace.

The bead is turned on itself and the mantra is pronounced. In this way, each one of the accounts is selected, always moving forward and turning them clockwise. At the end of the japa round, that is, with the 108 beads, we will arrive at the plume basin. When you reach it, you should avoid taking it between your fingers, although there is no problem touching it, the entire rosary will be rotated and the next round will start, on the account that was finished, since nothing passes over the gods, it is therefore, it should not be passed over the plume account.

It is recommended to perform the chanting early in the morning, preferably at the time of the Brahma muhurta. Our body and mind must concentrate and use the vibration of the mantra. Every name pronounced must be done clearly. A relaxed, comfortable position is preferably adopted to achieve good concentration and the back is always straight.

The Hindu rosary serves as the physical means of concentration and mantras as the mental means, which is why meditation exercises with a Hindu rosary are so effective. The bracelets generally have 27 beads, the 108 beads of the complete necklace must also be counted, which is 4 laps. Taking of course into account our right hand, that is, if it is right or left-handed, the Hindu rosary is left to rest on our right knee if we are straight.

Our left hand is placed in position on our left knee, making a sacred gesture or mudra as it is known in Hindu terms. If it helps your concentration to close your eyes, we invite you to close your eyes while reciting the mantras.

We must be respectful and when starting the Hindu rosary and saying the mantras you should not stop until we finish, at this time there are many distracting factors, so it is recommended to select a quiet place, which allows you to relax and concentrate, turning off everything that can distract your meditation, such as the cell phone.

Information of the Chakras and colors in the Hindu Rosary

As we mentioned earlier, some of the Hindu rosaries are placed with colored beads, so that people who energize their chakras feel identified and use them. It seems to us that only leaving the information that these rosaries have colored beads referring to the energy centers of the body, is information that with all responsibility we must deepen a little. For the first chakra called Muladhara, the color red is associated with the earth element. It is located at the base of our spine.

Its location tells us that it is the chakra of our survival, of our material stability and emotional security, it is a primordial chakra. The second chakra is called Svadhisthana, it is related to the color orange, it is a vibrational chakra that allows us to flow, it is important to know that flowing is accepting uncertainty as part of the process.

It is about our personal power, this chakra is neither more nor less important but it helps us take on life, affirm ourselves before the rest of the world, which will not help in decision making. Life is full of decisions, if we don’t make decisions we stagnate, we don’t move forward, strengthening this chakra gives us strength to face risks.

It is located as we indicated in the heart, as we can suppose its strength is love, union, compassion, it is the chakra that allows us the divine manifestation. Strengthening this chakra will help us in our relationship with our partner, family, friends and of course with our environment.

The fifth chakra is called Vishuddha, this chakra is related to the color turquoise, it is the first chakra related to the transcendent part of our being, it is purification, it is the path to consciousness, therefore its element is the ether. It is located in the throat and is an important part of creativity and communication.

The sixth chakra is known by the name of Ajna, it is related to the color indigo and its element is light, it is located on the forehead specifically between the two eyes, which for many other cultures is what is known as the “third Eye”. Our memory, our levels of consciousness, the ability to concentrate, our intuition depend on this chakra.

Finally, the seventh chakra called Sahasrara, is related to the color white, that is, the sum of all colors and also with the color violet, it is located in the crown and its element is thought. It is the highest level of energy, it represents our spirituality, our mental power is found in this chakra, it is the one that allows our connection with the infinite and the grace of our true being.

Below we leave some of the mantras that can be sung or repeated during meditation, when you use your Hindu rosary, we hope you like them. As is known, mantras are phrases that are repeated and used to meditate, they are sound vibrations that will have an impact on our mental and psychic consciousness while we meditate.

There are many mantras in the sacred language of India, each of them has a meaning and is adjusted or related to the meaning of our meditation, you can also create your own mantra, especially when you want to create a personal affirmation. Mantras can be recited verbally and mentally, whichever you feel most comfortable with. So based on the above we should know that there are mantras of healing, affirmation, wisdom, among many others.

One of the best known and used is the OM mantra, its popularity lies in the fact that it is a universal mantra, this sound causes a strong vibration of great power that helps to align our consciousness with the environment. Another is OM AH HUM, it is the mantra of I am that, it is one of the mantras that allows us to start in meditation.

OM NAMAH SHIVAYA is a greeting to God Shiva that allows us to join him in harmony. OM TARE TUTTERE is a mantra to strengthen courage and confidence. OM MANI PADME HUM This mantra invokes the wisdom, union with the universe and compassion of the Buddha himself.