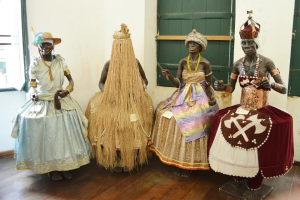 Do you want to know your orisha by date of birth? In this easy guide you will find out, but before that, you need some useful information.

In a world where there was slavery, victims of this practice found it necessary to adapt their beliefs to other religions to keep their cults alive. This is the case of the Orisha or Yoruba culture .

When they arrived in the American colonies as slaves, they mixed their deities with those of other religions .

This belief system gave life to the orisha horoscope, which designates each of us an orisha deity that symbolizes the natural and personal qualities of each individual. Like the traditional horoscope, the signs are established according to the date of birth. Know which one is yours.

How to know your orixá by date of birth?

The orixá of the beginning and strength. They bestow power and intolerance, effort, and vitality and are leaders by nature. Protects against fever, all kinds of surgeries and metal damage. It corresponds to Saint John the Baptist, its days are on Tuesdays, its colors are green, purple and black, and its number is 3 with all its multiples.

It symbolizes justice and gives characteristics of calm and stubbornness. They are enterprising, determined people, not afraid of challenges or hard work, and not worried about failure.

Oko brings help for crops, prosperity and fertility. It represents San Isidro Labrador, its day is Monday, its colors are red and white, and the number 7 with its multiples corresponds to it.

It symbolizes joy and superficiality. They are people of split personality, intelligent, kind and eloquent, but scattered, superficial, restless and indiscreet.

He represents the Son of Atocha, his days are Monday and Tuesday, his colors red and black, while his number is 3.

It represents motherhood, fertility and protection of the loved one. Its influence makes those born sensitive, compassionate, passionate, capricious, spiteful and fanciful at this time.

Charity corresponds to him, his days are Friday and Saturday, his colors yellow and white, and the number 5 with all its multiples.

It symbolizes fire, thunder and war. They are strong, passionate, creative, enthusiastic and analytical people. Her saint is Santa Bárbara, her days are Fridays and Saturdays, her colors are red and white and her number is 4.

He rules the salt waters and the tears of humans. She is also the patroness of motherhood, desire and love.

People in these encounters are shy, intuitive, mature, logical, empathetic, helpful, orderly, and sometimes have low self-esteem. The corresponding saint is the Virgin of Regla, her day is Saturday, her colors are blue and white and her number is 7.

He is the creator of justice. They are intelligent, courageous people, with social and artistic skills, but scattered, fearful and influenceable. He represents Santa Mercedes, his day is Sunday, his color is white and his number is 8 with all its multiples.

She is the seer of the orixás, cunning, wise and enigmatic. They are people who know how to give good advice, intelligent, with special intuition and spirituality. It represents Saint Francis of Assisi, its day is Sunday, its colors yellow and green, and its numbers 4 and 6.

The orixá of health. They are usually extreme, indecisive and selfish people, but very understanding, honest, fair and optimistic. It symbolizes Saint Lazarus, its day is Friday or Wednesday, its color is purple and its numbers are 17, 4, 11 and 13.

The orixá of earth and decay. They are determined, confident, ambitious, careful, realistic, pragmatic and prudent leaders.

It represents the patron saint of the city of Havana, its days are on Wednesdays, its colors are dark red and white, and its number is 9 with its multiples.

It’s friendship and represents great talents. They are people who know how to take care of others, have a lot of respect for others, solve any problem with creativity, ingenuity and tolerance. It represents Saint Norbert, his day is Tuesday, his colors are green and red and his numbers are 3 with their multiples.

The orixá of the earth, water and its fruits that travels through the world of the living and the dead. They are characterized by being loving people, with faith, passion and humility. On the other hand, they are hypersensitive, shy, insecure and dependent.

It symbolizes the Patronus of Doctors or Protector of diseases, its day is Friday, its colors are dark green, blue and coral, while its numbers are 3, 5 and 7 with their respective multiples.

If you have already located the orisha that corresponds to you, you may notice certain characteristics that resemble your traditional zodiac sign.