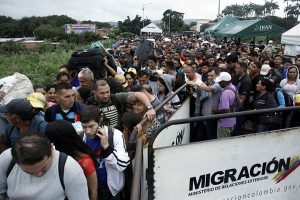 In many countries there is the particular situation that people leave their place of birth or origin to try new life experiences and sometimes work experiences; this has been called the phenomenon of migration, and it is the subject to be developed in this article.

This phenomenon of migration is nothing more than the mobilization of immigrants from one country to another in search of new opportunities and new life experiences. Among the characteristics that people present, mobility is determined.

At present, this phenomenon of migration has been increasing due to the fact that today’s society presents various internal problems within their countries, many of them regional conflicts. For this reason, people go out in search of new opportunities.

In the same way, this phenomenon of migration has had an increase and has come to be determined in a global situation. It is seen with greater boom in some countries than in others.

In the same order of ideas, the phenomenon of migration is considered a threat but also an opportunity for other countries and their peoples; for those who emigrate as well as for those who receive immigrants.

There are opportunities in terms of the countries that receive immigrants, in relation to which the increase in human capital is achieved as well as the enrichment of culture. In another order of ideas, the countries of origin reduce the social influence in the communities, and these countries can receive remittances.

As for people who leave their own place of residence in another country, such a process is called “emigration”.

This phenomenon of migration generally occurs due to the desire of the people involved in it for a better personal, political, economic and even social life.

There is the International Migrant’s Day, which was determined by the UN during the year 2000. This day was decreed with the objective of raising awareness of the right to movement of people in general.

Regarding the world or global level on the phenomenon of international migration, the number of 191 million was reached in 2005; this was determined by the United Nations at the global level. Due to the above, it can be said that three percent of the world’s population changed countries.

In relation to the group of migrants, a third part is found in developed countries and these migrants also come from a developing country.

Likewise, another third of a given developing country lives in a developed country, and its origin is from a country of equal status. Based on the foregoing, it can be said that the so-called “South-South” migrants are as numerous as the “South-North” migrants.

In 2005, Europe is considered the continent that received the largest number of migrants from everywhere, such as the United States, Canada; Asia. This hostel was 34 percent. Only 9% resided in Africa and 3 percent resided in Latin America and the Caribbean; the remaining 3 percent were from Oceania.

There is another characteristic to highlight and that is that half of the migrants in the world are female. In the most developed countries, the rate of women exceeds that of male migrants.

In the years 1990 and 2005, migrants decreased in terms of 72 countries. There were a number of nations (17) that reported over 75 percent of the increase in the number of migrants during that time.

As a destination for migration, the United States appears as the main one, receiving 15 million migrants, unlike this in Spain and Germany, only 4 million were received for each country.

Among the causes that can be determined as such regarding the phenomenon of migration, we can determine the following:

As a cause of the phenomenon of migration is also the labor duality since it causes weakness to the working class since it divides it into workers with the denomination of immigrants and native workers.

Another reason is the different levels of income in developed and developing countries.

In which the decision is made that several or one of its members go to developed countries and others stay in developing countries taking part in family responsibilities.

Some geographical characteristics are another of the causes of the phenomenon of migration. Regarding this, it can be determined that when there is a greater distance, less will be the cause of emigration.

There are other causes of migration called “human migrations”, which have to do with various characteristics, namely: ecological, political, military and economic. Such differences can be determined between general or personal. Below we classify them by their name:

There are some phenomena on this subject that affect the complexity of the migratory phenomenon. This will depend on the point of view of the receiving society or where people come from.

Some points must be considered in relation to the position of the migrant, among these points to consider are: the legal way in which they emigrate, the reasons why they emigrate; age, gender, level of education or obligations you have; the cause of the claim to abandon their land temporarily or permanently.

We can say in this regard that the emigrant will encounter some situations in the place where he emigrates, such situations may be of a legal nature, discrimination, whether religious or racial, language difficulties, customs, social laws that must be adopted in terms of the place of migration and to which it must adapt.

There is another factor that affects the countries of Central America, especially Mexico, this is the criminal gangs, such gangs are established through criminal networks with people who are deported from the United States.

Human migration is divided into several groups and taking into account the geographical scale, as well as the place of origin, destination, time, degree of freedom, age and cause of the migrants.

According to its geographical scale

This is a type of migration internally which is less controlled unlike the external one. Since people who live in a certain country have rights such as residence anywhere in the city or territory.

Unlike this, international migration is characterized by a dualized legality such as that imposed by the country of origin and destination. When the person or migrant obeys the law, they are a legal immigrant, but if, on the contrary, they do not, they are called illegal.

There are people who are against such qualification since there can be no legal or illegal persons, also the term irregular or undocumented.

According to origin and destination

Within this term, migrations from urban or rural areas, from developed countries, are distinguished. Among these, the most common is the one that occurs between cities seeking improvement in living conditions.

Migrations according to the degree of freedom

Regarding this issue, we must say that migrations are not all free or voluntary. This means that in some cases migrants leave their countries in a compulsory way due to economic reasons, persecution, political ideologies, etc.

In this group we can mention the Chinese movements that are related to the Three Gorges Dam or the situation produced by the famous Hurricane Katrina in the United States, which were not constant but seasonal.

By period of time

Many times there is the mistaken thought that migrations are permanent, many times this is not usually the case, these migrations in turn are subdivided into seasonal ones, such as periods of time in a given country or region, which may have a cause on the part of labor thing.

Another group that is subdivided is repeated temporary, where it usually happens that the migrant stays in the place for a longer period than he had planned or established, and his thoughts being a posteriori of returning to his country of origin.

Unlike permanent migrations, they establish a new place of life in another country or region, thus achieving the beginning of a new life plan.

Although we consider that this belongs to a less important division, the phenomenon of migration should be classified according to age, in terms of which the most common is usually adult migration, this migration has the characteristic of having more responsibility.

There is also child migration that usually occurs with their parents or relatives with direct responsibility, however there may be a situation where the child must travel after their representatives or parents.

Another type of migration is that of the elderly, however this is a minority, unless it is due to major causes such as disasters, politics, catastrophes, as well as a more comfortable and appropriate place to live.

Migration and its effects on culture

The phenomenon of migration turns out to be difficult and multifaceted. It is not considered innovative. The crossing of borders is a very common knowledge throughout the world and since all times.

It is the migrant’s need to move from one place to another in order to live new experiences in terms of the culture that characterizes the human being. This has prevailed for years in terms of history, however the towns give it their own nuanced touch.

Likewise, the phenomenon of migration is of a social and total nature. According to the opinion of Marcel Mauss; its dimensions and effects are of great capacity and are related in such a way that it is not possible to develop each mechanism separately.

All the concepts that are given for migration are different forms of experience. Among these concepts are the journey, the decision, the inclusion within society and the links with it in terms of origin. The phenomenon of migration all the time leaves an indelible mark on the personal life of each migrant and what he experiences.

Regarding globalization, it presents several characteristics that, as we mentioned before, are political, economic, cultural, legal; each one presents and determines each migratory process.

The most common among these is the economic one. This represents characteristics that have to do with the weight produced by bills, the factor of poverty as expulsion.

A mosaic of emotions

The phenomenon of migration presents a fundamental process in terms of the economy. Both men and women according to research and history, are part of the number of migrants who go in search of better living conditions; These also include: youth, children, garbage collectors, agricultural day laborers, adult men, braceros, Central American women, etc.

Such economy migration motivation is related to other elements. In relation to the works defined above, characteristics are presented in terms of emotions, feelings, construction of dreams or goals, memory, possibility of living two worlds in a level and simultaneous way.

The faces of violence

In relation to this issue, it occupies a significant place in the phenomenon of migration. Some causes of departure of migrants that have not been mentioned are civil wars, social or family violence. In the book by the author Soledad Álvarez, a chapter is devoted to the issue of violence in the phenomenon of migration. She also equally determines the issue of disappearances, the train of death and harassment.

Regarding the subject of the phenomenon of migration, the Supreme Pontiff John Paul II, pointed out during the celebration of the Jubilee of emigrants, in 2000:

“Really, in a community like ours, difficult and characterized by various tensions, the culture must conform to the laws and norms of prudence and clairvoyance, which manage to respect the positive elements of human migration, taking into account the possible negative aspects that can generate.

This will allow effectiveness in terms of respect and thus allow migratory shelter for all people.”