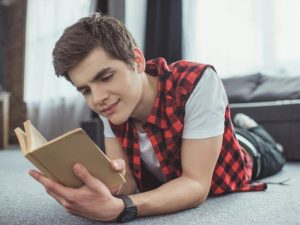 Intellectual development in adolescence has an important influence on the way in which the individual can observe, explain and accept the environment that surrounds him, in the present and in the future.

It is of great importance to take into account the main stages of development of children and adolescents, with the intention of offering them help, a good environment, equipment, working conditions and activities appropriate to their age.

Be sure to read this article on intellectual development in adolescence, an interesting topic that will allow you to learn much more about this complex stage.

Intellectual abilities of a person, first of all, are a necessary condition for inner freedom and mental health, they also contribute to a person’s adaptation to socioeconomic conditions.

Nowadays, in a rapidly changing world, the development of children and adolescents is different and it becomes urgent to pay attention to them in each of their individual stages.

Adolescence is a special stage of cognitive development, during which the final transformation of children’s intellectual mechanisms and the formation of intelligence of the “adult type” take place.

The restructuring of the intellectual sphere is the basis for the formation of the structure of self-awareness and self-regulation, has a significant impact on moral development, and also contributes to the proper course of the adolescent crisis.

The advent of puberty and adolescence causes intellectual changes in adolescents. Their cognitive structures face a series of important transformations that will modify their thinking.

These changes give the adolescent new possibilities and properties at the intellectual level that will allow him to reach a higher level of thought than that of the child.

The adolescent can consider all the possibilities regarding a problem, this means that he begins to have his own ideas and opinions about what surrounds him.

In many cases, you like to exercise your new intellectual abilities.

Access to these new cognitive abilities also allows adolescents to understand in a different and deeper way the information they receive and perceive.

There are plenty of examples to illustrate these words, just remember the pleasure most teens get from discussing almost any topic, no matter how insignificant it may seem.

The most banal and sometimes the most exotic topics can become the center of diverse and complex theories, with obviously lively discussions.

Adolescence brings many changes, which are not merely physical, but also mental or intellectual and social.

Each individual progresses at a different rate and has a different vision of the world, perceives it in a different way. In general, these are some of the abilities that you can notice in a teenager:

The main stages in the development of adolescents from 12 to 16 years:

Between 11 or 12 years there are sudden and quite harsh changes, if you will, in the way of thinking of each young person.

In this stage that is beginning, the adolescent will gather some peculiarities and qualities of the new stage, still quite elementary:

-The thought is separated from the concrete: reality becomes a special case with a world of possibilities. The ability to reason abstractly appears, that is, to reflect on some things that are not present at the time or place and some general concepts.

-Ability to make deductions from assumptions.

-Ability to dissociate factors in a combinatorial test.

-Ability to differentiate thought (subjective reality) from external reality and from the point of view of others (starting with relativity).

-Improvement of hypothetical-deductive reasoning or the ability to think scientifically, generating forecasts or hypotheses about reality and the world, to answer your questions.

-In a combinatorial problem, the adolescent knows how to vary a single factor keeping the others constant.

-The thought has become formal: it leads on possible combinations and not on the objects themselves; constitutes an operation within an operation (operation in the second degree).

-Development of meta-cognition: ability to reflect on the functioning of thought and its possibilities to control and regulate it.

-Ability to imagine the long-term future

-Search for personalization of thought (linked to the differentiation of others).

It is estimated that until reaching the age of twenty, it is when the individual reaches the apogee of the so-called formal thought.

Adolescence is a period of great physical and mental transformation. At this stage, a new identity is sought, since after adopting the values ​​of their environment, they reconsider and above all question them.

It is often a time of complaints, which can lead to conflicts, it is a period of separating, distinguishing and making decisions. It is not necessarily a stage of crisis in the sense of tensions and difficulties, but of changes.

Adolescence is characterized by:

Childhood or the stage prior to adolescence is important and crucial, as it represents the basis of the person that this individual will be in the future.

Therefore, no effort, initiative or resource represents a triviality or waste of time when it comes to educating adolescents.

The formal operational stage begins at about age twelve and lasts into adulthood.

As adolescents enter this stage, they gain the ability to think abstractly by manipulating ideas in their heads, without any reliance on manipulation.

Intellectual development in adolescence, especially formal thought, is very different from the way it develops physically.

While physical development occurs progressively and, if you will, quickly, over a period of about four years and in a fairly similar way in all individuals, intellectual development in adolescence is totally different.

It usually occurs quite slowly, calculating a period of about seven or eight years, with considerable differences between individuals.