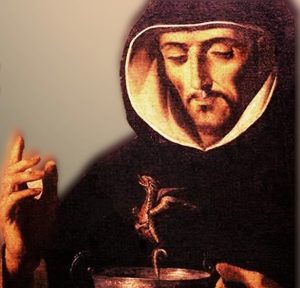 We all at some point turn for help to protect ourselves. That is why the Prayer to Saint Luis Beltrán is very powerful, so if you are looking for a prayer to heal, cure the evil eye and diseases that have to do directly with children, adults or a loved one, this publication is for you.

The Prayer to Saint Luis Beltrán is a petition to the saint used by his faithful believers to cure many ills, ailments, witchcraft, spells and moorings, but especially the well-known evil eye that goes hand in hand with evils caused by envy.

Saint Luis Beltrán was a Spanish saint, sanctified by Pope Clement X in the year 1671. He became well known and popular for the wonderful miracles he could perform. Among them, the healing of curses, sorcery, diseases and even healing of wounds was mentioned. How did he do it? through a spell or prayer.

The Ensalmo comes from the word “in and psalm” which means that it is a prayer that is guarded by a process or corrective care that is accompanied by magical powers to heal the sick. Likewise, it can be said that it is a rite of magical-religious representation, which sometimes goes hand in hand with prayers and alternative medicine care, which leads to the healing of diseases.

In contrast to the prayer or religious invocation that has the representation of obedient supplication to a sanctified character asking for protection and relief, charms , like spells, tend to have greater representation in the esoteric, mystical and magical.

The evil eye is a well-known non-religious conjecture that is widespread in diverse and numerous cultures, of which it is said that someone or any individual has the power to harm, cause misfortune and suffering, even get to incite the death of another person just by seeing it. In this way, whoever is affected is pointed out with the saying that “he is eyed” or with the other popularly known phrase “they cast the evil eye on him.”

Envy is the ambition to get something that another person has and that one needs. It is, therefore, about anguish, desolation or discomfort for the good of others. In this sense, envy is part of resentment, which shows us that the person does not want to overcome her position, but longs for the other to do badly or worse.

This evil can cause a person just by looking in a fixed way, it is cured naturally and with a prayer addressed to the saint of your favoritism. In this case, the prayer is addressed to Saint Luis Beltrán , since, as we mentioned before, he was a well-known and popular saint for treating this type of evil.

Prayer to remove the evil eye

Many religious tend to make this energetic prayer to Saint Luis Beltrán for the evil eye, directed both at children and adults, since they know that there are people with this great mental and spiritual power, capable of creating damage, even without intending to. . Normally the most exposed to receive this type of damage are children, since they are very vulnerable, innocent and defenseless. Next, we are going to quote this powerful prayer that you need to know to remove the evil eye:

“In the holy name of God the father, in the holy name of the heavenly protectors and in the name of Saint Luis Beltrán. I invoke this prayer to remove the evil eye. In these hours I call out to you Saint Luis Beltrán for your help to make the evil eye that has fallen as a result of envy disappear. Free me from the one who only wants to see his neighbor badly. May your Most Holy and merciful will make me recover my health and my state of mind.

San Luis Beltrán heals this faithful devotee in the Lord, I believe with faith in the power of your miracles, and make him move away from me being what is doing me wrong. Clean my path and remove my enemies from it, or envious people who do not want good for me. I ask that my strength and energy be recovered, and that my happiness and health return to the way they were before. Intercede for me so that my well-being may be restored.

Oh Saint Luis Beltran! Before you I am surrendered asking for this prayer, and with deep respect I recognize your actions, in life I ask you to free me from the evil eye, and from the heavy gaze of my enemies. Also deliver me from the hypocritical people who come to me wanting what I have, and when all the evil eye disappears from me, do not allow the person who did it to look at me again.

With a strong voice and imploring your name I ask that the evil eye come out of me, keep away everything that the enemy sends me, facilitate your powerful hand and pass it over my body and my being. Help me to achieve success and those people who wanted to see me fall today can see your works, that I can travel freely and do your holy will. Amen”.

This prayer is recommended to perform three continuous days or as many times as necessary, depending on the severity of the evil eye that is in the child or in the affected adult, this in order to root out the evil and that the person is completely healed. They even recommend accompanying the prayer by lighting a candle and with a plant, such as a palm or olive tree, helping the liberation process, however this is not mandatory, since prayer alone is powerful and miraculous.

Prayer for healing of diseases

Daughter or son of God, I bless you in the name of the Father, the Son and the Holy Spirit, three entities and a real essence; and of the Virgin Mary, conceived without original sin, Virgin before, during and after childbirth; and for the mystical Santa Gertrudis your dear and gifted wife, eleven thousand virgins, Mr. San José, San Roque and San Sebastián and for all the blessed men and women of your heavenly court.

For your glorious birth, incarnation and resurrection, ascension through such high and most holy mysteries that I believe with certainty, I beg your divine majesty, interceding your most holy mother, free and heal this person from illness, evil eye, pain, suffering, frustration and other any evil, injury, damage or suffering. Amen Jesus.

Not looking at the unworthy person who prefers such sacrosanct mysteries, I beg you Lord, for your honor and fervor of those present, use your charity and compassion to cure, heal and free from this wound, all ailment, suffering and suffering, removing of this place, and do not allow accidents, deterioration, decomposition, or damage to occur, providing health so that with it it serves you and fulfills your holy will. Amen Jesus. I promise you that our Jesus Christ heals you, blesses you and does in you all his will. Amen Jesus.