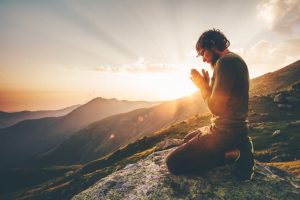 Psalm 91 consists of a prayer, many Catholics use it in order to request protection and establish changes in life, reading it every day helps to achieve spiritual and emotional balance, learn how to do it by reading this article.

To understand what Psalm 91 says, we must first understand the reason for their existence and what they are for. These prayers are considered a series of praises in Hebrew “Tehilim” grouped in a set of five books of religious poetic content. They have their origin in the early Jewish Tanakh religious scriptures and the Old Testament.

They are included in the so-called Wisdom books, known by religious historians and some researchers as “Psalter”, they can be found in the sacred books within the proverbs, the Songs and the Book of Job.

They have undergone some modifications for many years, since they are the representation and inspiration of other religious currents, such as Judaism, Catholicism and non-traditional Christianity, in each country of the world they are established as prayers and prayers of spiritual importance.

The Catholic Church annually publishes various brochures describing each of the Psalms, including the Catholic Psalm 91  ,  delivering them every Sunday in the Eucharist, it is of great help to those who seek to renew their faith in God.

A special case is represented by Psalm 91 Reina Valera , which is a psalm included in the Reina Valera Bible, one of the first Spanish translations of the Bible as we who speak the Spanish language know it, however this biblical translation into Spanish has received many revisions due to the translations.

It was observed that some words translated from Hebrew to Spanish have no coincidence with respect to the historical and spiritual context of the original version, the preamble to the version of the Reina Valera was represented by a Bible called the Bible of the bear. Which is one of the first biblical translations into Spanish.

This prayer is full of great spiritual meaning, it allows you to seek refuge in God through his protection, some recommend having the bible open to Psalm 91 in your home, however this does not guarantee any protection, only the prayer is a channel to get in touch with God.

Regardless of whether you are a Christian or a Catholic, Psalm 91  , the Catholic Bible,  has a power that allows you to grant protection against all existing evil, establishing a column of security on the path to eternal life. Likewise, it helps believers in witchcraft and black magic to observe the reality and power of God.

Psalm 91 powerful prayer allows you to gradually eliminate problems and adversities, some groups of believers call it the Psalm of prosperity, however it is used mostly for the well-being and protection of life.

“He who dwells in the shelter of the Most High shelters himself in the shadow of the Almighty. I say to the Lord: You are my refuge, my fortress, the God in whom I trust. Only he can free you from the traps of the hunter and from deadly plagues, for he will cover you with his feathers and under his wings you will find refuge.

“His truth will be your shield and your stronghold! You will not fear the terror of the night, nor the arrow that flies by day, nor the pestilence that lurks in the shadows, nor the plague that destroys at noon. A thousand may fall to your left, and ten thousand to your right, but it will not affect you.

“You will only have to open your eyes wide, to see the wicked receive what they deserve. Since you have put the Lord for your refuge, the Most High for your protection, no evil will come, no calamity will come to your home.”

“For he will order his angels to watch over you in all your ways. With their own hands they will lift you up so that you do not trip over any stone. They will crush the lion and the viper; you will trample beasts and serpents!

Psalm 91 is part of a group of more than 150 sacred Psalms, which represent songs used in the ancient Liturgy used in Jerusalem during the Jewish period called the Second Temple period. There are various versions of the Psalms such as the Hebrew versions that have been tried to compare with the Septuagint and Vulgate versions

Each religious current has adapted the numbering based on the so-called vulgate that groups the first 80 Psalms, the Greek Bible, for example, merged Psalms 9 and 10, 113 and 114 into one, in this way some currents such as the Christian through of Psalm 91 New Testament , where he merged some similar psalms that formed the structure of a single psalm.

Psalm 91 prayer of  protection  is found in the group of Psalms above the first 1000, which represent the blessings and praises to God. If you want to protect yourself even at night, use the Psalm 91 night prayer , which will protect you from the evil night angels.