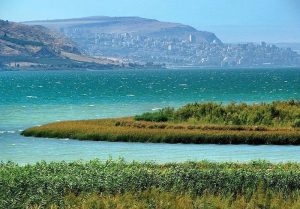 The Sea of ​​Galilee is a very emblematic place that is highly relevant in the sacred writings. However, it is also an important lake that supplies drinking water to Israeli territory and a tourist destination par excellence. All these details can be found in this article, we invite you to read it.

The Sea of ​​Galilee is thus known by many people throughout the world, however, in some regions located in the Near East it is known as Lake Tiberias or Lake Genesaret, since it is more similar to its features.

This is a freshwater lake that is located in the Northeast of Israel, specifically north of the Jordan Valley and on the shores of the city of Tiberias, 209 meters below sea level, which has unique characteristics and a notorious importance. related to Christianity, by virtue of the fact that it was the scene where different miracles were carried out by Jesus, and everything is alluded to in the biblical text.

The Sea of ​​Galilee has a hydrographic basin that covers regions of both Israel and Syria and Lebanon, and among Christians it is highly recognized because it was the setting in which different passages contained in the Bible were carried out, among those that can be highlighted, when Jesus was able to walk on water. That is why it is so important, religiously speaking, but also because it is the only naturally formed freshwater lake in Israeli territory.

The origin of the Sea of ​​Galilee is tectonic, and it is associated with the African Great Rift Valley complex, 21 kilometers long from north to south, and 12 kilometers long from east to west, whose maximum depth is 48 meters and has a height of approximately 212 meters below sea level, which makes it the lowest freshwater lake above sea level in the world.

In addition, its deepest point is 260 meters below sea level, while its perimeter consists of 53 kilometers and its surface has a size of 166 square kilometers.

The Sea of ​​Galilee, as mentioned above, is the largest freshwater lake found in the state of Israel, since it has a circumference of 53 kilometers, which is why it is known as a sea. It has an attractive heart shape and is located between the hills of northern Israel, occupying a strategic position that makes the lake present strong seismic activity, and volcanic activity also in the past, a situation that can be observed due to the basaltic rocks. igneous and magmatic found in the lake.

The waters of the Sea of ​​Galilee are fed and drained by the Jordan River, and it is currently the largest water reserve in Israel since it feeds the National Aqueduct that was inaugurated in 1964. Its construction has allowed the supply of fresh water to the cities, as well as agricultural irrigation to the south of the country; In addition to this, it provides drinking water in approximately 30% for irrigation and consumption in Israel.

Previously, the Sea of ​​Galilee represented an important economic source due to fishing, but today this is a highly controlled and even prohibited activity in certain seasons, in order to allow the repopulation of the marine species that live there.

The pleasant climate as well as the abundance of water found in the Sea of ​​Galilee, make possible the existence of a fertile soil that facilitates the growth of a large number of plants. In this sense, for many centuries the cultivation of dates, bananas, citrus fruits and vegetables has been very prosperous, in addition to the fact that it is common to notice cane fields along the coast. Its waters are home to zooplankton and several species of aquatic and semi-terrestrial crustaceans, molluscs, microscopic algae and fish, many of which are directly related to some others that inhabit the lakes of Africa.

Fishing has been a fundamental economic activity in the Sea of ​​Galilee region for a long time, but tourism has also been gaining ground due to the fact that around the Sea of ​​Galilee there are numerous ancient cities that are related to the history of Christianity. Nowadays, it is an ideal place to spend vacations due to its beautiful beaches, and therefore the activities carried out by humans have had a strong impact on the health of the ecosystem.

It should be noted that during the years in which droughts occur, the water level drops a lot, a reason that worries environmentalists since the sea supplies drinking water to the Israeli population, which obviously increases its demand as it’s growing up. There is fear that the water will acquire salinity, since under the lake there are springs of salt water.

Now, as mentioned above, the Sea of ​​Galilee is extremely important for Christians, since in the sacred scriptures Jesus is repeatedly presented developing a good part of his activities around this sea, even living in the city. riverside of Capernaum, located in its northern part.

Since the time of the kings of Israel, this lake is mentioned in the Bible, so much so that on its western shore is the city of Tiberias, which was built by Herod in honor of the Roman emperor whose name was Tiberius.

In various passages of the Bible, the Sea of ​​Galilee can be seen as the setting, where Jesus performed several of his most representative miracles and several episodes of great importance for the history of Christianity took place; in this sense, it was on the shores of this lake where Jesus performed the miracle of the fish, as can be read in Luke 5:1-11. Similarly, this lake is where the miracle of stilling the waters occurs, found in Luke 8:22-25. Another example can be found in John 6:16-21, when Jesus walks on the waters of the Sea of ​​Galilee.

The geographical location of the Sea of ​​Galilee, the access to its waters and the drawing of the border between Israel and Syria in the region, have generated a serious conflict between these two countries since the 1920s.

In this sense, Israel claims the borders that were established in 1923 by France and the United Kingdom, which were mandatory powers in the region during those years; For its part, the Syrian government demands the withdrawal of the Israeli Army to the positions they occupied before the six-day war, during June 1967, which guaranteed them access to part of the eastern shore of the lake.

All these aspects are still in dispute, since the position of both countries differs and each establishes its own opinions. This has generated a tense situation that has not yet been resolved, however it is hoped that at some point they will reach a consensual agreement regarding this problem.