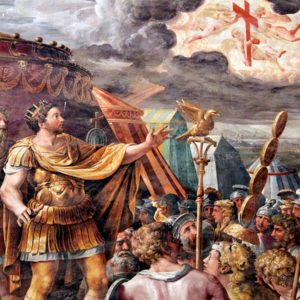 The Edict of Milan , consisted of a meeting and subsequent signing of a document that establishes tolerance towards Christianity, signed in the year 313 by the leaders of the Eastern and Western Roman Empire, learn more about this treaty by reading the following article.

To understand a little about the act of meeting that took place in the year 313 of our era, it is essential to first know that it is an edict, it consists of a decree published by some authority, which aims to promulgate a provision that allows a resolution or give a piece of news that implies the relevance of an act or quote some action.

It consisted of a treaty where Christians were accepted and ceased to be persecuted, also called “The Tolerance of Christianity”, it was signed in the city of Milan in the year 313 AD and between the leaders of the Roman empires of the West and East Constantine I The Great and Licinius, respectively, both Roman monarchs of those regions.

During the fourth century, the persecution of Christians had begun again. The Roman Emperor Diocletian, together with Galerius, began in the year 303 with the so-called “Great Persecution”, where the restoration of the unity of the Roman state was sought, they had noticed that Christianity was growing by leaps and bounds.

His order was to demolish all the churches and temples, arresting all the ecclesiastical authorities, burning the bibles, and decreeing the death penalty for all the authorities of the Christian Church. More than 9 years of persecution passed, but the actions did not end with the movement.

The ineffectiveness of the actions of the Romans led Emperor Galerius to promulgate on April 30, 311 a decree of indulgence in which the cessation of harassment by the Roman rulers was established, for many this decree was signed for political purposes.

However, the decree establishes the legal existence of Christians and the freedom to celebrate their cults, this first edict was called the “Edict of tolerance of Nicomedia”, the indulgence towards Christians could be manifested and most of the temples destroyed could be rebuilt, thus ending the persecution against Christians.

In that year Constantine I the Great decided to meet with the ruler of the East named Licinius, where they discussed issues of interest to the empire, among which was the situation of the Christians, the implementation of the decree issued by Galerius, in that meeting they came to an agreement where they agreed to establish new provisions regarding the situation of Christians.

It is then decided to meet in the year 313, there is no reference to the exact date and the meeting between the two held in the city of Milan was called “The Edict of Milan”, there it was agreed at first to grant freedom of religion to all citizens, recognizing Christians their freedom of worship.

It is also agreed to restore to all Christians their churches and temples so that they can carry out their religious activities, so that immediately after the Edict was signed, the properties that had been confiscated by the Romans should be returned to the faithful.

The edict of Milan sought to attribute prominence to Christianity by granting benevolence in all its forms, since Constantine represents a bridge of union, his mother was a great follower of Christians. The edict stimulated the elimination of paganism as the official religion of the empire and in turn gave powers to Christians and other religions to express themselves freely.

From that moment the Church became a legal religion and received legal recognition from the empire, thus allowing rapid growth in the following years. The edict of Milan really what it promoted in its essence was to give it a place of importance within the spiritual activities of the empire.

Constantine was an emperor who practiced the cult of the “Sun, Undefeated”, which was one of the movements of paganism, creating certain changes within the Roman Empire. The edict of Milan not only meant the official recognition of Christians, but also brought as a consequence profound changes within the Roman Empire, as well as the beginning of the expansion of the Church.

The return of the properties meant that when they were returned to the Christians, they would not make any payments to the owners who had acquired them, so that they do not receive any reward for the return, part of the edict reads as follows:

“Properties are to be returned to Christians without demanding payment or reward of any kind, and without admitting any kind of fraud or deception.”

Some owners of the confiscated Churches and temples did not agree with the returns and tried to make claims that caused some conflicts with the Roman authorities, but, as established in the Edict of Milan, the conditions described in it were irrefutable and had to be obeyed. .

In some cases force had to be used, while in other cases the owners voluntarily handed over the properties, although under oath and under certain not very friendly conditions.

The text that most historians know and have brought to light belongs to the letters written by Eusebius of Caesarea and Lactantius in his texts called “Ecclesiastical History” and Mortibus persecutorum”, it is not really known in how many parts and chapters it is constituted, what is known of the Edict of Milan is:

Although at present the entire content of the Edict of Milan is really unknown, it has been possible to recover records made in stone, the citations that are currently known are those found between chapters 35 to 48, of the chapter called “mortibus persecutorum” , which translated means “death of the persecutors”. Part of the edict of Milan reads as follows:

“Being I, Constantine Augustus, and I, Licinius Augustus, happily gathered in Milan to deal with matters concerning the common interest and the security of the Empire, we have thought that among the matters that we had to deal with, nothing more useful to our peoples than the to regulate first the form of honoring the divinity.”

“We have resolved to grant Christians and all others the freedom to practice whatever religion they choose, so that the presiding divinity in heaven may be propitious and favorable both to us and to those who live under our authority.”

Regarding the return of property and freedom to Christians, he says the following;

“Having warned a long time ago that freedom of religion should not be restricted, but that the discretion and freedom of each one should be allowed to exercise in divine things according to the opinion of his soul, we have sanctioned that, both all the others , as Christians, preserve the faith and observance of their sect and religion “

“That Christians and all others be granted free faculty to follow the religion they see fit; so that whoever may be the divine and heavenly numen may be propitious to us and to all who live under our empire.”

“Thus, then, we have promulgated with a healthy and direct criterion this our will, so that no one is absolutely denied the license to follow or choose the Christian observance and religion. Rather, it is lawful for each one to dedicate his soul to that religion that he deems convenient for him.”

It is convenient, therefore, for Your Excellency to know that we repealed the restrictions contained in the previous edict that we had sent you in relation to Christians [Edict of 312] and that from this moment we allow them to observe their religion, without being able to disturb or annoy in any way

According to some historians, the influence that Constantine had to carry out the edict of Milan obeys a military character and not a political or religious one, the Western emperor was a pagan at heart, his Christian convictions appreciated when he needed to act as a military man.

In the imperial band a symbol of the cross could be observed, which contrasted in the same shield with the image of the emperor stamped in gold, years before he had been recognized by the church and was about to be named supreme pontiff for the pagans.