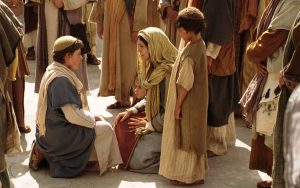 When praying the Holy Rosary, we reflect on the mysteries of our faith, and in each rosary we meditate on 5 mysteries that are each accompanied by an Our Father and ten Hail Marys. In this article you will be able to know everything related to Jesus lost in the temple, for children, animated and much more, do not stop reading it, it will be very useful.

The Joyful Mysteries of the Holy Rosary: ​​The Child Lost in the Temple

This biblical passage constitutes the fifth mystery of the Rosary, of the sequence of joyful mysteries.

Every year the parents of Jesus had time to make their customary pilgrimage to Jerusalem, to celebrate the Easter holiday. When Jesus was 12 years old, Mary and Joseph decided that it was time for him to accompany them to the celebration. This trip to Jerusalem also had a purpose beyond celebrating Passover, it was time that Jesus, already 12 years old, could participate in the  Bar Mitzvah ceremony , where all Jewish men were declared as adults.

This trip was not made alone with Jesus, Joseph and Mary traveled in the company of other pilgrims from Nazareth, and from many neighboring villages in Galilee. It was the only way to feel and be protected against the attack of highway robbers, and other forms of violence. By then, Judas the Galilean had taken up arms against Rome. That is why the entire country and the roads were patrolled, to prevent a possible popular uprising, during the Easter festivities.

Once the celebration period was over, everyone prepared to return to their place of origin, and trusting in the good work of Jesus, the parents did not realize that he was not in the caravan. By the time they notice that the now adult Jesus was not traveling back with them, they had already traveled a day, he was searched among his relatives and friends, but they did not find him, so they decided to return to Jerusalem in search of him.

The baby Jesus is lost!

Once they returned to Jerusalem to find the whereabouts of Jesus, three days passed and they found him in the temple, along with the doctors who he asked and listened to their reflections. Many of them were amazed at his wisdom and the quality of his responses. When Mary and Joseph saw him, they were very happy.

Mary, like any mother who becomes distressed when a child is involved in problems or illnesses, tells him: Jesus, my son, why did you do this to us? We have been very distressed for you while we were looking for you. To which he replied: And why were you looking for me? Do you not know that it is necessary for me to take charge of all the matters that my Father has entrusted to me? But those words that Jesus said to them, they could not understand.

This is therefore the first event, in which his earthly parents believe Jesus lost in the temple , Jesus makes him see his earthly father Joseph, who also has a heavenly father who is God, makes it clear publicly that his father is God already From there, Joseph leaves the guidance of Jesus in the hands of the heavenly father. His mission has already been accomplished.

What was Jesus doing among the doctors?

Well, simply what many adolescents do when they begin to know and understand the teachings of God, torment the doctors with endless questions! They were nothing more than catechists teaching his word. They were amazed at the intelligence and responses of Jesus, whom they considered very special.

Being in the temple, he loses the notion of time, since he finds his true father, feeling a total fulfillment by his presence. But he is grateful to his earthly parents, since without their help one would have been able to learn to pray and discover his father, his God. For this reason the statement of Jesus lost in the temple is not entirely true.