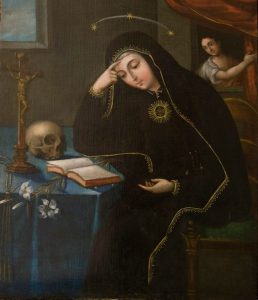 The life of Blessed Mercedes de Jesús Molina is an example of total dedication to God and of love and service to others, especially those who are most vulnerable and in need.

She was a woman who took the path of sacrifice, kindness, prayer and meditation, being a model of exemplary life, of love for the unprotected and of dedication and sacrifice. If you want to know much more about her continue reading the article

The city of Baba, then Guayas Province, in the southwest of the province of Los Ríos, head of the Baba canton, in Ecuador, saw the birth of Mercedes Molina de Ayala, on February 20, 1828.

She was the daughter of a wealthy family, owners of cocoa farms and producers of tropical fruits, the well-known “Hacienda Guayabo”.

She was baptized on March 5, 1828, less than a month old in the city of Pueblo Viejo.

In 1830 her father died, when Mercedes was barely two years old, leaving her mother in charge, who being a respectable lady dedicated herself to the upbringing and education of her children, teaching them to follow and be firm in their values, practicing justice. and solidarity.

He receives his First Communion and his Confirmation in May 1839, from the hands of Monsignor Francisco Javier de Garaicoa.

When she was about thirteen years old, her beauty was a source of admiration among the young singles who used to haunt her home, with romantic intentions. However, this stage was overshadowed by great sadness, his mother, Doña Rosa, died in 1841.

The pain, the bitterness and the mourning seized the heart of the young girl, the sadness that overwhelms her is indescribable, first orphan of a Father and now of a mother.

In 1844 he took up residence in Guayaquil, where he lived with a close friend of the family for five years. Later, in 1849, her sister María de Ella settled in the city and Mercedes went to live with her.

It was a time when he accepted the marriage proposal of a young man, just turned twenty-one. However, her interest in two very different paths presented itself to her, totally opposite, the idea of ​​a brilliant marriage or religious life in total dedication to God.

This doubt took root in his mind, he still hadn’t decided what to do when he had an accident at a family farm. While he was practicing horseback riding, a fall from the horse caused a fracture of one of his arms.

During his recovery he was reading some books, among them the biography of Mariana de Jesús. This book was a great and definitive influence in his decision, seeing Jesus differently and feeling his call now more than ever.

The interest in marriage failed to prevail, before his vocation. In her early twenties she called off the engagement. He renounces marriage, to start his mission of service and dedication to others, directing an orphanage. He dedicated himself to social and evangelical action totally.

This wealthy young woman turned her life around, renounced her family inheritance, handing over all the assets that both her father and mother inherited from her.

However, she did make use of the most important and invaluable of inheritances, her education, an intellectual and artistic training that few women of the time could have.

He decided to take the Mercedarian habit, devoting his life to prayer, penance and mortification, fasting and works of charity.

In 1850, Father Luis Segura, a Jesuit who was his confessor, noted that his discipline was extreme, the penances and punishments to his body were extreme, his day was devoted almost entirely to prayer and the few remaining hours he attended mass, prayed the rosary and did some manual work.

Her model was Mariana de Jesús and she adopted for herself the same extreme discipline that she did. Father Carbó noticed the notable physical damage at a glance and promptly authorized some of them.

Over time, he had another confessor, who authorized this type of mortification and penance, which worsened his health notably.

Around 1862, he began to have mystical experiences and that was when he understood that God was asking him to found a religious college.

She decided to call herself Mercedes de Jesús, a name by which she would be known forever, and she maintained a life of fasting, sacrifice, and prayer.

On many occasions he was seen walking the distance from his house to the Church on his knees, even when he tried to be discreet and do it at low-crowd hours.

These actions often generated gossip and malicious comments. She was called blessed and her way of proceeding and living was known by almost all of Guayaquil.

Around that same time, she met Father Millán, who was also her confessor and facilitated contact between her and Narcisa de Jesús Martillo Morán, who was also carrying out her mortifications and penances in a similar way and also professed a great love for the cross.

In 1870 she moved to Gualaquiza, where she undertook an arduous evangelizing task, as well as working as a nurse and teacher among the indigenous people known as jíbaros.

Known as the Rose of Guayas, Mercedes Molina stood out in her time for her devotion and spirituality, in addition to her deep desire to bring the love of Christ to others in need.

The life of Mercedes de Jesús Molina was deeply serene, reflective and contemplative, but very active, which is demonstrated in her works, such as the foundation of the Religious Family in the Church of Ecuador: the Marian Sisters, whose motto was: Let us be merciful, wherever there is human pain!

Her body prematurely aged and deteriorated by such extreme punishments to which she subjected him with penances and mortifications, gave her last breath on June 12, 1883.

He rests in the house where he founded the Congregation of the Marianitas, located in the city of Riobamba.

Blessed Mercedes de Jesús Molina founded the First Religious Institute in the Church of Ecuador, the Institute of “Sisters of Mariana de Jesús”, in Riobamba on April 14, 1873. Name she chose in honor of the Ecuadorian Saint, whose took on his spirituality.

There is no doubt that the now blessed was a pioneer in the education of women in her country, since at that time education was a right and a privilege for men and for people with money and power, who received education in their homes from the hands of teachers and governesses.

For women there was no possibility of receiving education, since there were no schools for that.

Therefore, you can deduce that this woman of incredible spirituality was the one who paved the way in a place and at a time when no one really cared to do so.

Creator of a pedagogy that focuses on the method:

Clear, precise and defined goals and objectives were outlined, which I carry out maintaining a personal, individualized, persistent, direct and even maternal relationship and action.

They described her as moderate, serene, kind, approachable, respectful, but very firm and confident. She is simple and open to dialogue.

The Mariana de Jesús Institute, is of missionary spirituality, focuses on the service to the most vulnerable, needy and unprotected human being.

The history of this process was almost forty years, first, His Holiness Pope Pius XII decreed the start of the cause of his beatification, on February 8, 1946.

Later on February 1, 1985, four years after receiving the title of Venerable, the Rose of Guayas, was beatified.

This happened during the pastoral visit that the Holy Father John Paul II made to the city of Guayaquil.

Some of the words that the Holy Father pronounced in his Homily on Friday, February 1, 1985 in Guayaquil read:

“ A humble daughter of this land, the Blessed Mercedes de Jesús Molina, receives today here, not far from her native village of Baba, then the canton of Guayaquil, today the province of Los Ríos, the recognition of her virtues.

In her we venerate an exemplary Christian, an educator and missionary, the first founder of an Ecuadorian religious congregation that, like an immense rosebush, according to the dream and inspiration of the Mother, already extends through various nations.”