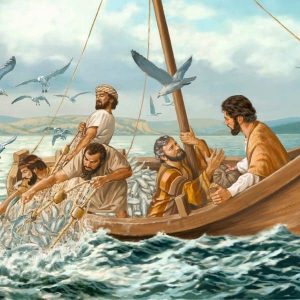 In this article you will know everything about the miraculous catch  of fish which has been reflected in different contexts, one before (Saint Luke 5:1 to 11) and another after (Saint Luke 21:1 to 14) of the resurrection of Jesus Christ, although the most prominent and remembered was in the first, it is worth mentioning that both took place in the Sea of ​​Galilee or also called the Sea of ​​Tiberias.

The miraculous catch of fish is currently the name usually used to narrate two evangelical episodes, which are now mostly treated as a subject of Christian art. These catches are miracles of Jesus Christ himself which happened in different contexts since one was before the resurrection of Jesus Christ and the other happened just after. The first miraculous catch of fish is reported in the Gospel of Luke (5:1-11), this in conjunction with the vocation of the apostles Peter, James and of course John to whom it is said “from now on you will be fishers of men “.

As for the second one that was in the Gospel of John (21:1-14), a specific number of fish is spoken and described 153 to be exact, while it is indicated that one of the apostles, specifically Peter, threw himself almost immediately to the water with his clothes on and everything as John warned him “it is the Lord”, with this he wanted to imply that God was indicating the perfect place to fish, at that moment they refer to seven fishermen who are the three mentioned above along with Thomas the Didymus, Nathanael of Galilee and two more that are not named.

It should be noted that both episodes take place in the Sea of ​​Galilee or Tiberias, and both consist of the apostles (who are fishermen) calmly trying to catch something but their luck was not what they expected to have, so they were about to find themselves. but at that moment Jesus himself incites them to cast their nets one last time.

They do it with nothing more to lose and to their pleasant surprise hundreds of fish came out when they pulled the nets out of the water, it was the best catch they had achieved in years, not even they could believe it because of what they represent and manifest from that moment all their faith towards Jesus.

The call in the Miraculous Catch

In those times, when all the people saw Jesus, they almost immediately went after him and pressed around him in order to have the great privilege of hearing the word of God himself, which was very common on the shores of Lake Genezaret. One day Jesus observed that there were two boats moored right on the shore of said lake, and the fishermen and owners of said boats had gone down for a moment to be able to wash their nets.

Jesus could not avoid and approached to greet them, although that was not the only thing he had in mind to do, as he approached he got into one of the boats which was Simon’s and respectfully asked everyone if they could move away a little from the shore, the next act proceeded to sit in the boat and teach the crowd, when this culminated almost immediately establishes a small dialogue with Simón:

J: “Take the boat to the deepest part and cast nets to catch fish.”

S: «Master we have worked all night without catching anything, but on your word I will lower the nets»

Simon and another of the apostles fulfilled the orders that Jesus had entrusted him to do so they took the boat to the deepest part of said lake and when they cast the nets they caught an incredible amount of fish, such was the magnitude that the same nets were They broke because they could not support the weight of all those fish, so they had to ask their other companions who were in the other boat to come and help them.

Without thinking twice they went and in less than they expected they completely filled the two boats to the point of sinking, seeing what happened Simon prostrated himself at the feet of Jesus telling him to move away since he even felt ashamed of being in the same place as Our Lord Jesus, so he responded to his words.

J: «Fear not, from now on you will be fishers of men»

Both Simon and his companions were speechless at what had happened, immediately afterwards they took the boats full of fish to land with great effort and decided to follow Jesus. All this is reflected in Saint Luke 5, 1 to 11.

At the moment that Jesus gives the order to Simon to go to the depths despite the fact that they had not caught anything all night, in some way he was inviting him to look for a much larger horizon, or in better words all A vocation is a call to go “into the deep”, in order to be able to detach ourselves from the small horizon that we are living in our ordinary life, and thus commit ourselves to a great work.

Trust in the word of Jesus

As for the words of Jesus, when he tells Simon to throw the nets back into the water, his mind tells him not to do it because if they didn’t catch anything all night because here it would be the exception, but for some reason Simon puts the wisdom of the Master above his experience, while in turn he is putting his trust in him.

With this he means that the vocation asks for trust in the word of Christ, and that although said word may seem illogical and disconcerting, the thing is to risk what Jesus calls us even if the chances of success are few, but we must always remember that the Master knows better than anyone what he is doing and somehow with his omnipotence makes the project of the vocation triumph.

At the moment that Jesus tells Simon not to be afraid, it is because he does not want him to move away from him out of fear, since if he had the audacity to believe in the words of Our Lord, now he must have that same audacity to be at side of Jesus trusting his encouraging word.

In the vocation, this means that Christ does not take away from anyone his reality as a sinner, but he is capable of giving us the strength to correspond to the call despite all our previous sins already committed, due to our faults in the past and even in the present our unworthiness towards it, that is why he helps us overcome our fears of human weakness by offering us his security and guarantee that our ideal of vocation can be fulfilled but it is our decision whether to take advantage of the opportunity or not.

At the end of the story it is mentioned that in the end “they left everything and followed Jesus”, this also leaving the miraculous catch they had achieved that day, this is because at that moment they understood that Jesus is worth much more than those two full boats of fish that he himself had gotten for them along with the words he said to Simon before retiring with the others, since he told him «From now on you will be fishers of men».

This means that all those who are destined to be fishers of men, in addition to Simon, the others were also fully invited to leave everything to do a more important work, the salvation of humanity. With this he wants us to understand that we must completely detach ourselves from the world if we want to achieve the goal of total attachment to Our Savior. While it also makes it clear to us that a divine work is capable of far surpassing any trade, career or even profession, so the vocation in turn is an invitation to a miraculous work.

If you liked the article and it seemed interesting, we invite you to take a brief look at these other miracles performed by Our Lord Jesus Christ, which should draw your attention, along with some prayers for those difficult times in which you need of a miracle