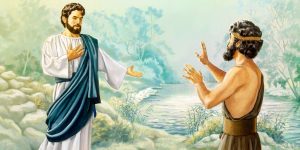 In this article, you will know and learn everything related to the Baptism of Jesus, which is an episode in the life of Our Jesus, where his cousin Juan takes the responsibility of performing said baptism. This appears recounted even in the smallest detail in the New Testament, where it is said that when Jesus comes out of the water to complete his baptism, a miracle occurs, which no one expected at that time.

The  Baptism of Jesus is a part of his life in which he himself wishes to be baptized and for this he goes to the banks of the Jordan River in Galilee, where his cousin John is preaching the word of God, when he sees Jesus Approaching him never crossed his mind that he would ask him to baptize him, so when the son of God makes his request to John, he is speechless and at the same time surprised since he does not believe he is the one to perform the baptism of Jesus in the Jordan River , where they were at the time. Jesus is still waiting for the answer and as expected, his cousin replies:

His reaction is logical since he knows perfectly well that he is the son of Our Miraculous God, in addition to that, he is also aware that baptism is only performed for those who are completely sorry for their sins committed, but the son of God, he has not committed any so he does not necessarily need baptism. Although John flatly refused at first, Jesus did not give up and I keep insisting:

He also emphasizes that he does not do it to show he is sorry for his sins, since that is the main objective of said ritual, according to his own words he does it to indicate that he appears before God, (his father) in order to do his will. At that time Jesus only worked as a carpenter, and was not yet recognized as the son of God among believers, only a few relatives and friends knew the truth of it and yet they were not entirely sure that it was true.

After thinking about it, Juan agrees to baptize him, but he does so because he hopes that if he is truly the son of Our God, then there would be a high possibility that the spirit of God would descend on Jesus. This is because John declares in his own words that:

“He who sent me to baptize in water said to me, ‘You will know who it is that baptizes with holy spirit when you see the spirit come down and stay on him’” (John 1:33).

What happens when Jesus submerges

The baptism of Jesus in the river of Jordan , begins with him immersing himself in the waters while John bathes his head, at that moment as a young and innocent son of God he takes charge of all the sins of men, all those thousands and millions of sins fall down his back and he assumes them as if they were totally his, this decision that he made of his own free will later will cost him dearly. The waters of the Jordan River totally cleanse his body while in turn leaving him free from any sin. It must be said that when Jesus immerses himself in the waters, he sanctifies it and gives him a new and greater strength which he will need in the course of his life.

For the little ones in the house to better understand this topic, this little video of the baptism of Jesus for children is perfect for it.

Finally, when Jesus comes out of the water to complete the baptism, a great event takes place that would mark him for the rest of his life, although he already sensed that this would happen. Said event was the manifestation that God made at that precise moment, which manifested itself descending like a dove coming over Jesus and prostrating on him while the heavens open and with a resplendent light illuminates him as the new God of the world, just as it says in the New Testament;

“Immediately after being baptized, Jesus came up out of the water; And behold, the Heavens were opened to him, and he saw the Spirit of God descending in the form of a dove and coming upon him. And a voice from Heaven said: This is my Son, the beloved, with whom I am well pleased» (Mt).

All this means that from that moment Our Jesus becomes the spirit son of God, since he was only a human son of God, just like Adam and Eve, but after baptism he remembered the life he had in heaven as a spiritual son of Jehovah as well as all the truths that God taught him before coming to earth, so from then on Jesus had a closer and special connection to his Father, and now both inside and out he is I consider myself as the Son of God, totally pure. But unfortunately, so much power requires great responsibility and sacrifice, which later cost him his life on earth.

The first representations or images of the baptism of Jesus were in the second century in Paleo-Christian painting, which were very simple compositions where only the figures of Jesus and John, the protagonists of said baptism, were present, although by the sixth century in In Byzantine painting, several details were added, such as the presence of angels or, in some artistic expressions, these represented Jesus with a beard, while the water was highlighted with small details to make it more realistic.

If you liked the article and found it interesting, here you can discover more topics about Jesus in these links, as well as some of his most powerful and popular prayers that can help you in difficult times or even seem impossible to overcome.