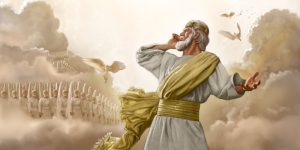 To know how many prophets produced by the hand of our Lord wrote the Bible, it is necessary to go to the scriptures and analyze how many books of the prophets are embodied in the Bible. Since although the bible has several, not all the prophets that existed are reflected in it.

How many prophets wrote the Bible?

The Bible is inspired by our Lord, thanks to the intervention of the Holy Spirit, to men who fulfilled the necessary conditions to be touched by God and bring the word of God before all men.

These men were chosen during different years and with different life situations to carry out their writings, with the aim of writing the word of our Lord to fill his people with hope.

Among the men who participated in the writing of the books found in the Bible are kings, shepherds, common men and several prophets are also embodied. All were chosen by God for being faithful men of faith, with the aim of writing portions of his word.

In total there are 16 prophets who have their books embodied in the biblical scriptures. The sacred writings identify them through their names, with the exception of Jeremiah who wrote two, one of them is identified with his name and the other book is called Lamentations.

The prophets were chosen by God and were inspired by the intervention of the Holy Spirit, with the aim of writing the word of God. In the major prophets are Isaiah, Jeremiah, Ezekiel, and Daniel. While the minor prophets are Hosea, Joel, Amos, Obadiah, Jonah, Micah, Nahum, Habakkuk, Zephaniah, Haggai, Zechariah, and Malachi.

It is important to mention that 13 of the prophets found in the Bible, dealt with speaking about the destruction of Israel, since they were related to it. The remaining three prophets busied themselves with delivering messages during the restoration of the holy land.

The loss of the country was consumed in two periods

The northern kingdom of the holy land fell in the year 734-721 BC, at that time there were prophets who developed their lives and work of God during and before that time. They were divided between the major prophets and minor prophets. (See article: Prayer to succeed at work  )

These prophets were Isaiah, Joel, Jonah, Amos, Hosea, and Micah. While this was happening, the southern kingdom of the Holy Land fell in the year 606-586 BC. The prophets that made up this era were also made up of both major and minor prophets. Which were Ezekiel, Jeremiah, Daniel, Nahum, Obadiah, Habakkuk and Zephaniah.

The reconstruction of the holy land as a country takes place in 536-444 a. C. is at this time when the life of the prophets Haggai, Zechariah and Malachi develops.

There is a classification of the prophets according to the messages they gave and to whom they gave them. An important point is to mention that the outstanding prophets in giving messages to Israel were Amos and Hosea.

Two other prophets were sent to speak to Nineveh, these were the prophet Jonah and also Nahum. In addition to this, a single prophet was entrusted with the mission of heading towards the nation of Babylon, this was Daniel and he is listed as one of the major prophets. (See Article: The power of early morning prayer )

On the other hand, Ezekiel had the task of addressing the citizens who were prisoners in Babylon. In addition to this, Edom had the mission of being sent to Obadiah.

The prophets sent by God were concentrated in greater numbers in the nation of Judah. This is because there were nine prophets who gave the message and word of God to this nation, which are the following Joel, Isaiah, Micah, Jeremiah, Habakkuk, Zephaniah, Haggai, Zechariah and Malachi.

This indicates that the prophets who were in charge of giving the word of our Lord, which are reflected in the Bible, are 16. It is important to mention that anyone who has the purpose of studying the Bible must know the names of the prophets that are found in her, since they formed an important part of the expansion of faith in God.

In the same way, it is much more practical to be able to search for each of his writings and start with his studies and meditation on them. It is necessary to mention that each one has scriptures with great teaching on God. Which allows us to understand how wonderful his power is, which allows us to develop Christian maturity and spiritual growth.

When we are aware of how many prophets are part of the scriptures of the bible and which were their respective nations to which they directed their messages, it allows us to observe how God developed and showed mercy in the people to whom he sent his men. Aiming to straighten out the zendas from him.

Why was God sending them?

The work of the prophets began after the repentance of the 10 tribes almost at the end of Solomon’s reign. All this event is reflected in Kings 1 and 2.

They highlight the strategic disposition to maintain the two kingdoms. It is important to mention that the one from the north decided to give devotion throughout the territory to the idolatry of a calf where cults were held in Egypt.

On the other hand they started with the devotion of Baal, which in turn started a suggestion towards the southern kingdom. Throughout this period the people of God decided to abandon the beliefs of our Lord and began with acts related to the paganism of neighboring countries. That is why for many the name of God was disappearing from their minds and souls.

For this reason the liberation of humanity was dissolved, leading to failure. These events caused the prophets to be born. (See Article:  The power of early morning prayer )

The priests were considered the experts of the religion that inhabited the country. These were in charge of constituting elements related to religion that were transmitted from generation to generation. In addition to this they are called ignominious of the holy land.

They had the job of teaching religion to all those who were part of the people of God. They were the ones in charge of teaching and they did not groan at the transgressions of the Israelites. That is why they collapsed before them and became heads of perversion.

On the other hand, the prophets were not an inherited class. Rather, they were people who took a summons from God. These had precise conditions that allowed them to function correctly with the word of God.

It is important to mention that Jeremiah and Ezekiel are considered priests as well as Zechariah. Unlike Isaiah, Daniel and Zephaniah who were not considered priests, rather came from the blood of the performer. In addition to this, Arnós was called by God when he was a pastor. Of the other prophets the origins of him are unknown.

The Bible has prophets who in many cases explained where they came from and sometimes where they were born. On the other hand, it is important to point out that the priests received their investiture by inheritance or generationally. While the prophets were men who received a call from God directly to act under his word.

Who wrote the Bible?

The Bible has forty authors. Some have known authorship, however others do not have any identification sample and that is why it is still considered a mystery. According to studies, the books that are part of the Bible were made in a period that was understood by 1500 years.

Among the best-known authors of the Bible mentioned by our Lord Jesus Christ, the name of certain prophets is displayed, such as Paul in the case of the New Testament or in the Old Testament, as is the case of the books of the law of Moses. That are directly related to the word of God that Moses took care of communicating to his people.

It should be mentioned that the books are considered inspiration effected thanks to the Holy Spirit. For they were human beings who in that moment of wisdom were inspired and guided by Him.

The 12 minor prophets that are found in the old testament were in charge of writing the inspiration of God in the sacred writings, as is the case of Hosea, Joel, Amos, Obadiah, Jonah, Micah and Nahum. In addition to the fact that the most outstanding of the New Testament is John, who was the one who wrote the Apocalypse. (See Article: The power of Prayer )

The Bible has a group of canonical books that are directly related to the religions of Judaism and Christianity. The prophets who captured their writings in the books that comprise it are considered men inspired by the divine word of God. Which demonstrates the relationship that God has with human beings.

It should be mentioned that in about twenty-one centuries the Bible is produced by five billion copies. That is why it is considered the best-selling book throughout history worldwide. For this reason, it is considered one of the books with the greatest influence worldwide.

The Bible and its writings, including that of the prophets, is the main inspiration for the literary construction of history. Stall has books that are related to human culture. For this reason, it is considered of worldwide influence and without a point of comparison with other examples related to religion.