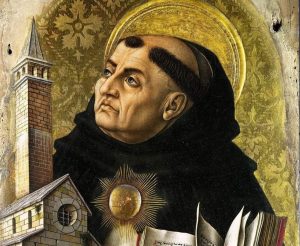 Saint Thomas Aquinas was a great theologian, and if you wonder what he did during his life. In this article you will know each and every one of the contributions of Santo de Tomás Aquino , do not stop reading the post that the information contained here may be of your total interest.

Saint Thomas Aquinas was considered in the Middle Ages respectively as one of the most important thinkers, Thomas throughout his life dedicated himself specifically to teaching, the various studies of the writing of numerous writings. This can be seen reflected in all text related to the life and work of this outstanding character; This saint is represented in images holding an open book in his hands, it can also be seen in the paintings of Fra Angelico, Simone Martini or Francesco Traini, among others.

As far as Saint Thomas is known, he was born in 1225 in a castle in Roccasecca, which was located in the vicinity of what was known as the Kingdom of Naples. His father, who was named Landolfo, was a member of a family of Lombard origin. , his father was considered the lord of Roccasecca. Due to its strategic location, this town suffered serious damage as a result of the clashes that existed at the time between the papacy and Emperor Frederick II.

Tomás’s father was married to the daughter of the counts of Chieti, a beautiful Italian city, the wife’s name was Teodora Teate, from the union of both through their marriage 9 children were born respectively, which Santo Tomás was the youngest of the men of the family. At the age of 5 years of life he enters as an oblate in the Benedictine monastery of Montecassino to do his first studies.

In this monastery where he enters from the age of 5, and one of which has his abbot, he remained until 1239, since by decree of Emperor Frederick II all the monks who belonged here are expelled. During the time that Santo Tomás was in said monastery he carried out various studies such as; ordinary studies of grammar, Latin, music, morals and religion and much more.

By the end of the year 1239 he entered the University of Naples in order to continue his studies once he had to leave the monastery, in Naples he remained until the year 1244. By this time he already felt a great interest in the life of Dominican friars, however, it is important to highlight that these tastes were not well seen by his entire family and that for them the correct thing is that Santo Tomás was the one who succeeded his uncle at the head of the abbey of Montecasino.

Among his plans was to travel to the city of Babylon to once there be able to participate in a general chapter of the order and after this partition he was going to go to Paris to continue his studies.

However, his plans were abruptly interrupted as his older brothers kidnap him and later hold him for more than a year inside the castle of Roccasecca, in order to prevent him from joining the order and in this way manage to persuade him in his decision, something that they did not achieve since seeing that Saint Thomas did not change his mind they let him fulfill his will and continue with his plans in this way in the summer of the year 1245 he traveled to Paris to finish his studies and be part of the order.

It is important to mention that Santo Tomás made great intellectual contributions, through his deductive thinking, these contributions are of great importance and of great help, for example in the; administration, psychology, education, economics, etc. Since we briefly learned about the life of Saint Thomas Aquinas, we are now going to describe each of his contributions to the aforementioned areas:

The contributions of Santo Tomás within philosophy are based on being a theological philosophy, this means that he based the analysis of his contributions on studies of Christianity. In this way, it can be highlighted that his greatest contribution to this science was to verify that God truly exists, he gave proof through the synthetic formulation through the five ways.

His theory posited that the existence of God was the result obtained through lived experiences deducing from the effects to the cause. In this way, it can be highlighted that his philosophical thought is primarily based on the fact that objects, as well as everything that can be observed in the universe, exist together with their essence, which means that all matter exists physically, but its essence manifests itself for the perfect creation of God.

The “Five Ways” that Saint Thomas raises with respect to his contributions begin with the purpose of reflecting on all the particularities that we can find in the world, they can be appreciated with total precision and be perfectly understood by man since through this great explanation St. Thomas bases his entire theory on the existence of God.

The contributions of Santo Tomás left both for philosophy and for theology, they made him the most outstanding philosopher of scholasticism in medieval times. Since most of his works, not to say that in their entirety, are characterized by highlighting all the philosophical thoughts of the Catholic Church, based on the logic enunciated by Aristotle and the theology of Saint Augustine, his book the Summa of Theology , is a must for those who are dedicated to the study of theology and philosophy of Christianity.

It can be highlighted that the contributions that Santo Tomás left with respect to psychology, is that for his time he raised on the subject of free will and on human behavior respectively and it is important to mention that even today his contributions and approaches are in validity.

Each and every one of these studies or principles are of great value in the branch of Christian psychology since, with their contribution to understand impressionable actions of the will of the soul, in this way we better understand human nature.

These studies show that both followers and opponents of religions can reach a point where these aspects have positions in relation to Christianity and modern culture. As well as not wanting to recognize that Saint Thomas was referring to the same thing that Freud, Jung, Adler and Frank also referred to.

Contributions to the administration

The  contributions of Saint Thomas Aquinas to the administration are an awareness with the ideas provided by the great Greek thinker Plato on the so-called communal property, which is why, in accordance with the concept of the property system that was practiced by the apostles in reference to the common good, Santo Tomás concluded that prices must be managed respecting the ethical values ​​of justice and also equity as main components of commercial exchange.

The contribution he made to the administration is directly related to the sense of compassion and that it is logical that the prices of the goods that need to be acquired must be very equitable since Thomas Aquinas thought that the prices of the goods were calculated on correspondence with the feudal system that was the economic system of the time. Prices will be set according to the common good and offset the costs of producing them

The opinion of Saint Thomas Aquinas regarding the administrative, are what are described below and that are of great importance today:

As previously mentioned Saint Thomas Aquinas began his studies at the age of 5, this made him a student with many advantages since his education began from an early age, his family visualized him as the next Abbot of the Monastery of Montecassino, founded in the 6th century by Saint Benedict of Nursia, but Saint Thomas decided to become a monk of the Dominican Order.

He continued with his studies and his intellectual preparation prior to being ordained as a monk, he dedicated himself to the study of theology and philosophy and in both branches he came to teach and in this way and produce works of full validity, and of great importance. Contributions of Saint Thomas Aquinas to education.

Primarily he dedicated himself to conducting studies on philosophical issues that can still be observed and are still valid today, thus his contributions to education are of great relevance.

For Santo Tomás Aquinas, Education is paramount, in this way he always defended it, since as he indicated that education is the only way to acquire knowledge of the nature of his being and his relationship with God. Saint Thomas Aquinas considered that education had to take into account elements of philosophy, morality, productive arts and seek perfection by practicing Christian virtues.

Contributions to the economy

Saint Thomas Aquinas used to think that everything that surrounds us is not really our property since God is known, God is the only and great created of the entire universe and therefore we should share everything and consider it a gift. For man, he only needed incentives to perform, and in this way he also indicated that private property was part of this incentive and the result of the work of the human being.