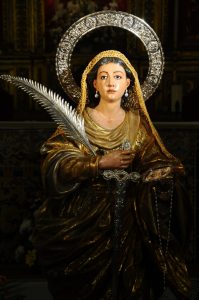 Prayer to Saint Lucia consists of a beautiful prayer that has been made for many centuries in order to prevent and eliminate eye diseases, in this article we will show you how to perform it and obtain the greatest benefit.

Belonging to worldwide Marianism, Saint Lucia for many centuries has been summoned by millions of faithful to cure eye diseases, patron saint of the blind, is considered one of the most beautiful figures that the Church has.

She was a beautiful lady who lived with her parents in the small town of Syracuse, Italy, and was formed from a very young age in the faith of Jesus Christ, she lost her father at a very early age, but her mother gave her all the love she deserved, to later to be the emblematic figure of the Church.

From a young age she dedicated herself to the virtue of Christianity, offering her virginity to the Lord with all the inspired faith, she was also characterized by having very beautiful eyes, which many, upon seeing her, said radiated the love of Jesus Christ, hence her famous devotion to the blind and the sick.

The martyrdom of Saint Lucy

During her adolescence, the mother, without knowing Lucía’s vows, tried to marry her to a young pagan, however, she tried to prevent it by claiming various excuses, so that the mother would not know of her vows.

One day the mother fell ill and they could not get any kind of cure, Lucia invited her to go to the tomb of Santa Águeda, and told her that if she was cured she would let her exercise her vow of virginity, being in the tomb, Lucia prayed and prayed much for her mother, being very valuable and allowing the mother to heal, then allowing Lucia to exercise her vows.

The young man found out and reported her to the authorities and Lucia was forced to stay in a brothel, because of this she requested divine intervention and could never be touched even by 5 men who tried to abuse her, then she was sentenced to death and when trying to being burned the flames could do nothing.

Later she was vilely tortured until her eyes were gouged out, but God in his infinite love for her, restored her sight by placing other eyes in their place, however her torturers took her life by cutting her neck, from that moment Saint Lucia was She became a martyr and a very important figure for the Church.

This venerable virgin has been venerated for many years by thousands of faithful, there are various prayers (which we will see later), which express the devotion, love and kindness that she can express to those most in need to cure their visual illnesses, without However, there are prayers that ask the Virgin for various favors, for which they use the following prayer:

“Oh Blessed and kind Virgin Saint Lucia, recognized worldwide by the Christian people as a special and powerful advocate of sight, we turn to you, full of trust, to ask you for the grace to keep ours healthy and give it the use for the salvation of our soul, without ever disturbing our minds in dangerous spectacles.”

“May everything they see become a healthy and valuable reason to love our Creator and Redeemer Jesus Christ more every day, whom through your intercession, oh our protector; we hope to see and love eternally in the heavenly homeland. Amen.”

This prayer to Saint Lucia should be performed in a quiet and lonely place, where you can count on a lot of peace and where there is no interruption.

The holy virgin has many devotees throughout the world, who have maintained faith in her through various prayers, which within their content express praise, requests and requests for favors, mostly related to eye diseases and the welfare of the blind.

Each prayer to Saint Lucia is structured requesting the blessedness of the Virgin, her universal recognition of the Christian people, then the praises and the petitions continue, the person who needs healing can sometimes be named and finally the prayer is concluded by giving thanks to God, Jesus Christ and the Holy Trinity.

Prayer to Saint Lucia to heal the sight

The following prayer is considered the most used in people who request healing of an illness related to sight, in all of Latin America Saint Lucia is highly revered, there are even towns and places that bear her name, serving as an inspiration to other women, the prayer says So:

“Oh dearest Saint Lucia, I come to you so that you intercede before the divine Throne and get me the graces that my soul needs to live in holiness. You preferred to have your eyes gouged out rather than deny the faith and pollute your soul.”

“And God, through an extraordinary miracle, replaced them with another pair of perfect eyes to reward your virtue and faith, appointing as the protector against eye diseases. (At this time the request is named).”

“Oh dear Saint Lucy, I come to you to protect my sight and heal the disease in my eyes. Help me to keep the light in my eyes so that they can see the beauties of creation, the brightness of the sun, the color of flowers and the smiles of children.”

“Also preserve the eyes of my soul, the faith, through which I can know my God, understand His teachings, recognize His love for me and never lose the path that leads me to where you, Saint Lucia, are in company of angels and saints. Oh Saint Lucy, protect my eyes and keep my faith. Amen.”

It is important to highlight that this Saint Lucia prayer  must be performed with great faith, in a very quiet place where no one can disturb, avoid noisy places, that is why our recommendation is to go to a nearest chapel or church where you can calmly invest enough time to perform this beautiful prayer.