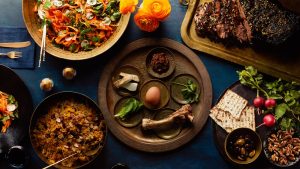 In all religions, there is always a day that is dedicated especially to the celebration of God, to whom they have devotion depending on the religion, because, on Pesach, which means Passover , the liberation of the Hebrew people is celebrated, that was being dominated and beaten by a dictatorship full of slavery and pain by the kingdom of Egypt. The star that we show you below is the symbol that represents Judaism.

The question would be  what is Passover? and his answer is simple, it is a celebration of great importance for the Jews, and that in the Hebrew calendar takes place on the 14th day of the Hebrew month of Nisan and lasts approximately 8 days. Where the first and last days of this celebration are strictly sacred, the people must put aside their daily activities, and only stay at home offering prayers and eating food strictly chosen for those days.

This Easter is reflected in the book of exodus, part of the old testament of the bible. And meanwhile, the other days are determined as a big celebration, very similar to Easter celebrated in the Catholic Church.

What is celebrated on Passover?

This holiday commemorates the memory of the step that the Hebrew people took with Moses to be free and cross the Red Sea, which means that the people have been freed from so much torture suffered in captivity by the rulers of Egypt and becoming a free nation.

For Catholics, that special and sacred day in our calendar, the Gregorian, would be celebrated at the end of March and the beginning of April. In this party it is forbidden to eat food with derivatives of cereals and/or products that have been fermented, or those that are called Chametz and contain yeast. Some of these foods are barley, wheat, oats, among others.

More than anything, it is customary to share unleavened bread, which is a bread, but, without fermentation, or a bread with a thin and flat shape. According to the story, the day the Jews were liberated, they had to run away with great eagerness, and they did not have time to leave the bread for the road to rise, therefore, they had to eat it that way. Thus beginning a new tradition that they would continue over the years.

In this celebration the whole family group is invited, from children to the elderly, everyone must be dressed in an elegant way, many of them with outfits that were used at the time of liberation, in order to honor and relive the moment they spent. their predecessors.

In the following image we show you the variety of foods that you will find in a Pesach celebration dinner.

This tradition can be observed in Leviticus, one of the oldest existing biblical books of the Old Testament and the Tanakh. Where the Matzot festival is explained and where we quote:

“In the first month, on the fourteenth of the month, between the two afternoons, Passover is for God. And on the fifteenth day of this month is the solemn feast of unleavened bread as an offering to God; seven days they will eat unleavened bread, the first day they will have a convocation, and they will not do any servant work, since they will offer God seven days as a continual offering” (23:5).

Within the festivity, and as a tribute, all the houses will go through an exhaustive cleaning, where all its inhabitants also take all the yeast they have and must sell them to people who are not Jewish and if not, they must be thrown in the garbage.

Many years ago, their ancestors carried out this type of celebrations by sacrificing a pig, since the animal was given as an offering to have more fertility in the towns. In addition to this, they celebrated the end of the strong winter, and welcomed spring, with its warm and delicate climates.

These pigs should not have stains on their bodies, should be roasted and eaten in a very well cooked way, since it is forbidden to remove their organs, and, in addition to this, should be accompanied by unleavened bread, bread unleavened or matzo. At the end of the holidays, what was not eaten had to be burned.

During dinner they will place glasses of water and/or non-alcoholic beverages on the table, since it is not allowed to ingest them. An additional glass is also added, in case the Lord decides to go down to accompany them.

There are biblical precepts that highlight the reason for the holiday:

The Passover seder is called to celebrate the first night of Passover. At this gathering, diners prepare lamb with bitter herbs, boiled eggs, and vegetables.

In addition to this, at dinner time the entire journey of the Jews is remembered from its beginnings, during the ordeal of slavery until the glory of being liberated.

Currently, many Jews in any part of the world have created a series of recipe books with delicious preparations that comply with the Pesach restrictions, and thus make a different dinner, one of those recipes has mostly ingredients such as Carps (Celery, parsley or potato), Maror (Horseradish), Jazeret (Lettuce), Zroah (Roasted Chicken Bone), Beitsa (Hard Boiled Egg).

In many of these dishes, all the ingredients are generally served separately, but sometimes all of these are combined in delicious salads with delicate dressings.

Within these meetings, diners are also offered exquisite desserts for after the Pesach dinner, flat cocoa cakes without sugar, with many nuts and fruits.

Without a doubt, we can say that in  Passover most of the dishes are rich in vitamins and nutrients that are very healthy for our organisms, recognized worldwide for being low in fat.

Differences between Jewish and Christian Passover

Without a doubt, in both religions there is a God to believe in, who is good, full of love and compassion towards us, his children, but nevertheless there are a series of customs that differentiate one from the other.

On Passover, the end of the slavery of the Jews in Egypt is celebrated, when the Lord comes down to free them from all the torture and pain they were suffering. This celebration always has an exact date to meet, since it is the 15th day of the month of Nisan, while in the Catholic religion it is celebrated on Holy Week Sunday, which is rotated in date since our calendar is Gregorian.

Bread, and readings from the old testament, prayers and verses that are read by the guests, to commemorate another year of celebration of the freedom of the Jews.

Another difference is that in Jewish Passover there are many restrictions regarding food, activities, among others, while, in Catholic Passover, in some countries eating meat or listening to music is prohibited, since it is necessary to keep a mourning from the day Jesus was killed until his resurrection. More however, large meals and feasts always predominate, as long as red meat is not eaten, many of the believers prefer to eat fish, while others make diets of only vegetables and salads.

In the holy week of the catholic religion, in many countries masses and prayers are offered, keeping a due respect to God and Jesus, more however the holy week is taken by many families to make recreational and fun trips, to share the Family junction.

Another difference between these Easter is that the Jews have their own calendar by which they are guided, like the Catholics, the Jews handle the lunar calendar, which consists of 354 days, while the Catholics are governed by the calendar sun of 365.