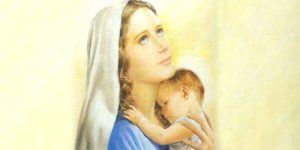 This article is about the great Prayer known as Bajo tu Amparo , it has shown a great effectiveness to a large number of faithful, in addition, it is a beautiful tribute to the Holy Mother of Jesus Christ.

Prayer Under your Protection

“Under your protection we welcome, Holy Mother of God; do not reject the prayers that we address to you in our needs, rather deliver us from all danger, oh glorious and blessed Virgin! “Amen”.

This prayer is short but concise, as you can see it is addressed directly to the Virgin Mary, it aims to beg her to protect us in times of greatest need and to keep us safe.

Origin of the Prayer

The prayer was found in Egypt, however it was clearly of Greek origin, it used the term “Theotokos” to make references to the Holy Mother. This discovery was revolutionary at the time because it was the first time that the name of the mother of God appeared written in a text that had the purpose of praying or invoking, later after having carried out many studies and investigations, it was concluded that that the prayer was at one time a Byzantine hymn.

The arid and desert climate of Egypt helped these texts not to be ruined, on the contrary, they were preserved in such good condition that another series of parchments and manuscripts were also found, all of them were written in ancient Greek and Coptic, in addition, also there were translations in other languages ​​of this prayer and they had made many copies.

In many of the parchments that were found, the prayer Bajo tu Amparo was written , this finding was incredible because it showed that approximately from the end of the year one hundred after Christ and the beginning of the year two hundred after Christ, there was already a community that prayed to him to the Virgin Mary, this date was an approximate that was obtained from the manuscripts where these prayers were found.

This sentence, once translated into a modern language thanks to Edgar Lobel, became so viral that it was later passed into several languages, later it was translated into Spanish, a version which reached all of us Spanish speakers.

This prayer was a sign of love by the first Christians towards the Holy Mother, they prayed to her and asked her to cover them with her mantle, this due to the great love she felt for her son Jesus, also because of the love that feel for the rest of the humans.

Those devout Christians who wholeheartedly recite this prayer feel a closeness to those Christian brothers who initially began to recite it, it is said, this feeling helps today’s Christians to be closer (spiritually speaking) of the Virgin Mary and of Jesus Christ.

Classical and well-known musicians such as, for example: Wolfgang Amadeus Mozart and Antonio Salieri, had the great will to immortalize these prayers, they used their music as a means, in fact, thanks to them it was possible that these prayers of Byzantine origin which were used Like hymns, they will sound like music from heaven.

Pope Francis proposed two prayers to ask for the holy catholic church, one was directed to Saint Michael the Archangel and the other to the Holy Virgin Mary, these are intended to pray for those members of the church who, for some reason or another, deviate of God’s way. The prayer to the Virgin Mary is already reported in this article ( Under your Protection ), the prayer to Saint Michael the Archangel is as follows:

“Saint Michael the Archangel, defend us in the fight against the evils and snares of the devil. Come to our aid, we beseech you suppliants. May the Lord grant it to us! And you, prince of the heavenly hosts, with the power that comes to you from God cast Satan and the other evil spirits who roam the world for the perdition of souls into hell.”

As you can see, here Saint Michael the Archangel is asked to protect those people who are being tempted by the evil one, he is not only asked for protection, but to help them return to the path of good, he is also asked to intercede for those people before God the father.