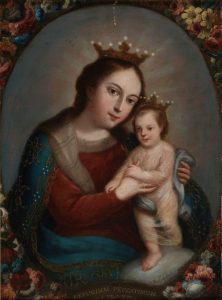 The Virgin of Refuge is an important mediator before the Creator, to ask forgiveness for her sinful children; In this sense, she is venerated in many places and great devotion is maintained to her, since those with a truly repentant heart resort to her. If you want to know a little more about the history of the Virgin of the refuge , continue reading this article, because it is for you.

Virgin of the Refuge

The story of Our Lady Virgen del Refugio dates back to the year 1690, when a Tuscan peasant found a clay Marian image, which was in a stable. Moved by his faith, the farmer decided to place the image in an oak tree on his land, in order to obtain the protection of the Virgin Mary.

Over time, the people of the area began to frequent that place, to pray the rosary in front of said image, which is why they decided to build a small grotto around the tree, in the year 1699, and since then it has been called “Virgin of the Oaks”.

Later, in 1709, some girls painted the Virgen de las Encinas on paper, and in all innocence carried her in a procession through the neighborhood, together with a group of people who recited prayers accompanied by chants.

On the other hand, Blessed Antonio Baldinucci attended the religious ceremony, and at that moment he realized what his true vocation was: to be a missionary of the people with the image of Mary. It is noteworthy that he was a Florentine Jesuit priest, and also a teacher of Philosophy in Rome.

In this order of ideas, the priest called a painter of his trust and ordered him to make three paintings on canvas, in which the mother of God was represented in the same way in which he had seen her honored by the girls, event that moved him.

The blessed gave it the name “Sinners’ Refuge”, and the first copy was taken by himself to the village missions. What this character wanted, and actually found, was a Marian image that would be his companion, guide and teacher in the missions, that would manage to reform customs and revive devotion and help his devotees obtain the favors of Mary.

The second image was sent to Mexico by the Jesuits, and since then it is highly venerated in that country; Finally, the third image remained for the Blessed’s private veneration, so he kept it in his room until, after his death, the Jesuits took it to Galloro.

Regarding her appearance, the Virgen del Refugio is represented seated, and she has the child standing on her lap, towards whom she tenderly tilts her face. Both her mother’s and her son’s temples are crowned by a royal diadem set with jewels, and she is dressed in a pink tunic and blue cloak, along with a hazel-colored cloth around her neck.

For his part, the son is dressed in a light cloth of modesty, which is actually a long tunic made of translucent fabric. Her hands are intertwined with Maria’s, who holds him and is then able to stand on her. At the top of the images you can find some bouquets of flowers that trace a festive arch, beautifully surrounding the image.

As the Blessed carried out his multiple processions carrying the canvas of the Virgin of the Refuge of sinners, throughout many provinces, towns and regions, God worked miracles and performed inexplicable miracles. They were even able to mourn their sins in public, those who were more stubborn, and also everyone who had hatred in his heart was able to reconcile with his enemy, and then he managed to bring the Christian life to his heart. .

It was incredible to notice so many tears of sincere repentance that were shed in front of the image of the Virgen del Refugio, who only wanted the hearts of her believers; she was known as a safe refuge in our transit through this Earth, so that she would intercede and mediate before Jesus Christ for the forgiveness of our sins.

In this sense, it was considered a refuge to achieve the conversion of sinners, who resorted to it to achieve their favors. During her tours, the Virgin was adorned with colorful flowers, ribbons and candles, although there were also those who placed bracelets and silver around her throne, despite the fact that she did not want riches.

It was on July 4, 1717 when the Vatican decided to crown the Virgin and the baby Jesus with gold, at the request of a large number of parishioners who made the request. Since then, the invocation of Our Lady of Refuge is celebrated every July 4, and her image is a unique piece that reminds us of Mary’s great love for all of us.

A little later, on November 7, 1717, the honorable missionary of the Virgen del Refugio passed away at only 52 years of age, right in his room in front of the image of the virgin, while he prayed to her with great devotion and asked her show it as it was.

Finally, the chapel of the Mother of God was embellished thanks to donations made by its most faithful believers, and in 1732 the Jesuit fathers left the church to the diocesan clergy who always had great devotion to the Virgin. Unfortunately, in the year 1943, Frascati was bombed by allied planes, and the image of Mary that was in the Cathedral was totally destroyed.

Then it was replaced by the canvas that was in Gallora, and has always inspired deep maternal love and infinite devotion, a refuge for sinners, doing true honor to its name.