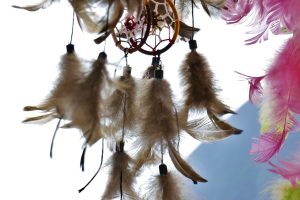 Have you ever heard of the evil meaning of the dream catcher? If you didn’t know it existed, then you will be surprised what some people say about this symbol.

What is a dream catcher?

The dream catcher is a circular-shaped object with intertwined lines forming a kind of mandala, which mimics a spider’s web. It also has hanging beads and feathers, very similar to indigenous crafts.

Its inspiration is a legend of the American Indians who made this accessory believing that it was capable of filtering dreams, trapping nightmares in the web of threads and letting only good dreams pass.

But, there are those who say that this meaning is not the real one and that the dream catcher has an evil meaning. Next, you will find out what that meaning is.

Despite being known worldwide for being an object of indigenous origin used to filter dreams, catching nightmares in its web and letting good dreams pass, this object is also seen by some people as something bad, evil, an association with forces of the bad.

Some say that the dream catcher is an object associated with witchcraft. A kind of bewitched object to enchant people and distract them from reality.

The dream catcher, in this context, would have its origins in ancient rituals where witches wove the web to trap a person’s thoughts and dreams, in order to enchant them.

But, this story was not as well known as the indigenous legend that is the best known in the whole world, where these objects are seen in a positive light.

Which story do you believe?

Of course, like any mystical object, the dream catcher can be seen in different contexts and there are those who adore it, as well as those who condemn it.

As these are cultural issues, everything will depend on one’s personal beliefs. If you use an object with good intentions, then it will vibrate positively energetically. However, if you place evil and evil intentions on that object, then it will gain this evil force.

That’s why it’s very important not to accept gifts from just anyone or buy someone’s dream catchers that you don’t know how you produced it and what your intentions are.

All the objects we use can be charged with good or bad energies, it all depends on the people who carry them and also on who makes them.

Therefore, you can believe in the evil meaning of the dream catcher if your intention is also evil. And you can use it in a positive way if you prefer to follow the cultural traditions of the indigenous people that gave it a good meaning.

It all depends on what path you want to take, what energies you want to put out into the world and resonate with people.