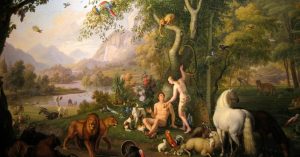 The Bible is the sacred book, the one that keeps the treasures of the word of God, in it Christians find a guide for life. But can this compass of Christianity have contradictions? Through this article you will be able to learn more about what the contradictions of the Catholic Bible are, genesis, and much more, do not stop reading it.

The contradictions of the Bible

Despite the fact that Christians consider the Holy Bible as a book that indicates the correct behavior that we must have, in order to enjoy a full life and in tune with the truths revealed by God, we must recognize that the Bible is a book, a bit difficult to read.

It has dazzling storytelling, and poetry that deserves to be appreciated and admired, although a large percentage of its pages is made up of ancient legal codes, prophecies that speak of the final judgment, and gloomy stories of kings. However, the book of life has a special charm for Christians; with the belief that God manifests through its pages.

It is important that you are very clear that the Bible is made up of a collection of books that were written by different people and that never had the intention of recounting the facts, trying to generate manufactured homogeneity in their writings. In reality, each of the authors had a different purpose, and therein lies the differentiation of emphasis in the writings.

This means that one writer gives it greater strength by highlighting the wrath of God against arbitrariness, while another emphasizes grace and compassion towards the wicked. That is why we find two books in the Bible, two passages in the same book, even two verses in a chapter, that show God in two very different facets.

knowledge of the facts

It is very useful that you have a better overview of the literature, the geographical space and the most significant cultural aspects, where the events took place, in order to understand the discrepancies in the Bible.

The most important thing is not to get involved in discussing the contradictions that can be found in the biblical readings, what is relevant is to aim to verify the authenticity or reliability of the biblical accounts. For many experts, the fact that what is written in the Bible is not a product of the imagination is irrefutable, its writers were in charge of faithfully recording all their experiences in the best possible way.

Contradictions of the Bible: clues

The biblical accounts have their detractors, but also a large number of believers defend their wise words of spiritual guidance. The core lies in the Father’s message, rather than in the inconsistencies of form.

Clarifying doubts Who was first? The man or the animals?

In the bible there is an express quote that says that animals were created, and immediately proceeded to create man in their image and likeness. However, later it is said how God created the animals so that man would not feel alone. That is the first question, who was created first? Here are the two passages that contradict each other.

“God made the beasts of the earth after their kind, and the cattle after their kind, and everything that creeps on the earth after its kind. And God saw that he was good. And God said: Let us make man in our image, after our likeness; may he exercise dominion over the fish of the sea, over the birds of the sky, over the cattle, over all the earth, and over every creeping thing that creeps on the earth.”

“And the Lord God said: It is not good for the man to be alone; I will make him a help meet. And the Lord God formed out of the ground every beast of the field and every bird of the sky, and he brought them to the man to see what he would call them; and as man called every living thing, that was his name.”

Is it Jesus, the one who dictates justice?

We have always had as practitioners of the Christian faith, that Jesus was a man of peace, completely denied the use and practice of violence. It all depends, in which part of the scriptures we make our inquiries. Here we present two different readings, where you can see how the perception of Jesus as a man of harmony changes completely.

“Peace I leave with you, my peace I give to you; I do not give it to you as the world gives it. Not your heart be troubled, neither let it be afraid”.

Contradictions of the Bible: Is Stealing a Sin or Not?

One of the ten commandments is not to steal , therefore it is a sin to do so. In Exodus a contradiction can be seen regarding this. Let’s see below:

“You shall not steal.”

“And I will give this people favor in the eyes of the Egyptians; It will happen that when you leave, you will not leave empty handed, but each woman will ask her neighbor and the one who lives in her house for silver objects, gold objects and clothes; and you shall put them on your sons and on your daughters. Thus we dispossessed the Egyptians.”

As we already know, it is a sin to steal, but in this story it is contradicted by inciting the women to despoil the Egyptians. And stripping is synonymous with stealing. This is another sample of the contradictions of the bible.

Both in real life and in the stories of the Bible, there is definitely something that is very clear to all of us, every action has its reaction. Faced with such an assertion, the following questions arise: will they judge me only for my actions? Or on the contrary, do I have to prevent others from committing mistakes, so that they don’t judge me for them? Here are two examples:

“Ready for your children the slaughterhouse because of the atrocity of your parents. Let them not rise up and take possession of the earth, And fill the face of the world with cities.”

Problems in the internal consistency of the Bible