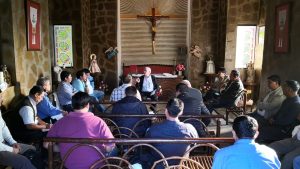 The Short Creed is the most performed prayer by the entire Catholic population around the world, by reading this article you will learn why it represents one of the most important.

It is contemplated within the most important notions of Christianity and especially Catholicism, it is usually recited just after the reading of the gospel during the religious services of the Catholic Church, there are two versions, the Apostles’ Creed and the Constantinopolitan Nicene Creed.

What is the Creed?

It is considered the word of God materialized in man, it is expressed in a simple way and reflects the way of representing our belief and faith in God, it is said that the short creed is not a prayer and less a prayer, but a way in which God explains to us how to understand the sacrifice and surrender of Jesus.

Praying the Creed establishes faith and hope in the Christian religion, appreciates God as the main figure that allows us to reinforce our belief and finally mentions Jesus Christ who as the son of God could live among us and died in the same way to redeem beings. humans, the holy trinity and forgiveness are mentioned along with eternal life.

It is considered the short prayer that the apostles of Jesus made before beginning any meditation or moments of encounter with God let’s see:

“I believe in God, the Almighty Father, Creator of heaven and earth. I believe in Jesus Christ, his only Son, Our Lord, who was conceived by the work and grace of the Holy Spirit. He was born of the Virgin Mary, suffered under Pontius Pilate, was crucified, died, and was buried.”

“He descended into hell, on the third day he rose from the dead, ascended to heaven and is seated at the right hand of God, the Almighty Father, and from there he will come to judge the living and the dead. I believe in the Holy Spirit, the Holy Catholic Church, the communion of saints, the forgiveness of sins, the resurrection of the body and eternal life. Amen”.

“I believe in one God, Almighty Father, Creator of heaven and earth, of all things visible and invisible. I believe in one Lord, Jesus Christ, the only Son of God, born of the Father before all ages. God from God, Light from Light, true God from true God, begotten, not created, of the same nature as the Father, by whom all things were made.”

“For us men and for our salvation he came down from heaven, and by the power of the Holy Spirit was incarnate of the Virgin Mary and became man. And for our sake he was crucified under Pontius Pilate, suffered and was buried, and rose again on the third day according to the Scriptures, and ascended into heaven and is seated at the right hand of the Father, and will come again in glory to judge the living and dead, and his kingdom will have no end.”

“I believe in the Holy Spirit, Lord and giver of life, who proceeds from the Father and the Son, who with the Father and the Son receives the same adoration and glory, and who spoke through the prophets. I believe in the Church, that she is one, holy catholic and apostolic. I confess that there is only one baptism for the forgiveness of sins. I await the resurrection of the dead and the life of the future world. Amen”.