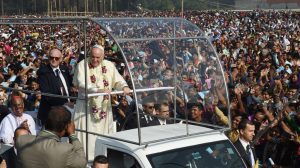 The pope’s messages to the youth  of the world forcefully determines the importance of youth for the Church, in this article you will be able to know what those calls have been that he has made throughout his apostolate and the most important messages of Pope Francis to the youths.

Since the beginning of his ministry as pope of the Catholic Church, Francisco h has brought a message of peace to all corners of the world, but he has emphasized the figure of young people, every two years the world youth congress is held , in which the participation of thousands of young Christians establishes the ideas and spiritual guidelines for the future of the world.

It is of the utmost importance for the Church that the future leaders and administrators of the planet have a firm vision of peace and the responsibility to carry the word of God through all the corners of the planet.

Among the activities that make up his agenda, Pope Francis maintains contact with young people of all nationalities, races and creeds, the pontiff constantly recommends that young people be the night light of so many non-believers who do not know Jesus.

With the following words Feed and spread the fire of Christ that you have in you! The pope received many young people at the Vatican recently in 2018, where he was able to listen to the proposals that lasted approximately three days, where his family, society, politics and faith were discussed, appreciating and considering the level of distortion that exists these days in each of these situations.

Approximately 350 young people were present in the Clemency room in the Vatican, most of them Hispanic, where the pope was able to converse in his native language, thereby allowing him to maintain a more fluid and understandable message.

He exhorted that young people are called to be light in the darkness of the night of so many companions who still do not know the joy of new life in Jesus, he also reiterated that the God of Today is the same as always, the one who venerates the Church and that of Abraham, David and Jesus, and ends by telling them:

“The Church needs them to be fully herself. They are not only the future, no, they are the today, the now. Either they play it today or they lost the game. Today.”

Pope Francis expresses to young people that they are the first protagonists of the pastoral conversion so desired by the synod fathers, and emphasizes the word protagonists, where it is not simply a diplomatic gesture of good will, but a true commitment to the world and above all with God.

It also expresses to you that young people are protagonists or they are nothing, either they go ahead of the train or they will end up being a caboose, dragged by the tide, you represent the action of the sinusoidal Church, that is why your reflection and meditation are asked to bring the most important religious actions and modifiers in the coming years.

Be bearers of the light of Jesus

With this recommendation, Pope Francis’ message to young people tries to reach the hearts of the most isolated, reminding them of a document referring to the Youth Synod, where the disciples of Emmaus established trust in Jesus

That situation later served as a model for future generations, in that Synod the disciples were not afraid to take the road regardless of the night, since they considered that Christ illuminated their lives.

You must meet the Lord along the path of life, just like the disciples of Emmaus who stopped fearing when they allowed Jesus to enter their souls, they were the bearers of the light of Jesus in the darkest night.

Jesus in all the paths of mankind

Even Pope Francis continues to remind young people that after the disciples of Emmaus met Jesus, they felt the vital need to be in their community, since joy does not exist when it is not shared with others.

It will be present in everyone’s life and even when they return home after hearing this message, be partakers of the glory of the Lord through the word of Jesus, repeat it and preach it.

The holy father expresses that Jesus lights the fire in the hearts of all the disciples and men of good faith, as he did with those of Enanas, that is why the pope encourages them to go ahead and spread that fire that Jesus placed in each heart of the men, especially young people.

Young people and the Church.

The pope always reminds young people that they are a member of a single body of the entire Catholic community, they must fight to maintain unity and avoid divisions, at this time young people can make a difference, he invites them to think about the situation real that the world is increasingly disunited.

These disunions create the divisions that bring war, disease, lack of kindness, the spirit of man is corroded and the cure for it is the Church, you must take that message to all corners of the world, as the apostles did in his time.

Many messages from Pope Francis to young people have been sent since his beginning of the apostolate to young people around the world, it is understandable the concern of the Holy Father for the way the world is moving.

Francis and young people have a special connection, since the first meetings in Latin America they have allowed to create a harmony in the relationship with them, let’s see then those important messages:

“Running away from life’s challenges is never a solution. It is necessary to resist, to have the courage to resist”.

“It is a lie that the only way to live, to be able to be young, is to leave your life in the hands of drug traffickers or of all those who are only doing sowing destruction and death. That’s a lie”.

“The secret of that connection is difficult to explain. Perhaps it is because Francis encourages them to be brave in life.”

“I have confidence in you, young people, and I pray for you. Dare to go against the current.”

“So, I ask you, young man: «How do you knead these ideals, day by day, concretely? Even if you make a mistake, do you correct yourself and walk again?». But the concrete

The secret of the Pope’s connection with young people is determined by the way he preaches towards them, Pope Francis’ messages to young people serve as an example where he invites them to be models for other young people, good and creative leaders, he himself encourages them to be bold, no matter who may limit your actions.

Another of the things that attracts young people to the figure of Pope Francis is his way of speaking and how he communicates with them, he is constantly talking with young people, who follow his word and sometimes feel identified.