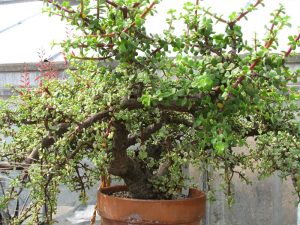 The abundance tree is a plant whose purpose is to attract abundance and prosperity to the person who owns it, however, like any plant, it needs a lot of care and attention. If you want to know more about this interesting topic, continue reading the post.

The tree of abundance is characterized by being a plant that since ancient times has been associated with the fortune and prosperity of a person, which is why, although this bush has its scientific name, which is it; Portulaca is mainly associated with the name of fortune tree, it should be noted that there are various types and varieties of this tree, the Portulacaria afra Variegata can be highlighted.

The name tree of abundance derives mainly from indigenous cultures, but especially from the Inca tribes, this tree is surrounded by a peculiar legend which directly relates the tree to water and food in large quantities, that is, in abundance, the tree of abundance is characterized by being the representation; of prosperity and wealth and, consequently, with good fortune.

For Feng Shui, the interpretation and symbology of the tree of abundance is closely related to both prosperity and abundance. This culture has the faithful belief that if you take a tree of abundance and place it in the corner of one of the rooms from your house, however the most recommended is; the main room and next to a window can be placed in the form of a bonsai, the fact is that this culture believes that if this tree is placed in one of the corners that were already mentioned, prosperity will be attracted to your home immediately even This tree can also be placed inside an office or business to attract prosperity in your work life.

The Legend of the Tree of Plenty

The tree of abundance or also known as the tree of prosperity is surrounded by a peculiar legend, which has its origin mainly in the entire area of ​​what is known as Amazonia, this legend arises many years ago, and everything begins when two twin brothers of indigenous culture who were named; Cuillor and Ducero go on a visit to another village to see a good friend of theirs who knew each other by the name of; Mangla the purpose of his visit was to ask his friend to supply them with food since they were going through a severe drought crisis which had lasted a long time.

Upon arriving at where his friend Mangla is, with great affection and kindness, he supplies them with necessary food such as; the yucca chicha and the chonta chicha, the twins in the time that they were in that other village were able to observe that here there was a kind of fish scale that was of a large size.

Their great curiosity led them to investigate the place where this curious large scale came from and where they fished it, they concluded that the fishing was carried out in a lagoon very close to the place where they were, they went to this place to They also try to fish like their ishinca, a kind of funnel-shaped joint trap, but for more hours and hours they tried, they couldn’t catch anything at all, this situation made the twins retaliate with their friend Mangla and They beat them because they believed that he lied to them for the simple fact that they could not catch even one worm.

Mangla seeing their anger and disappointment led him to tell him everything truly, he told them that in the Macaws mountain range there was a tree which was very large and thick and that in its flake you could see a large and beautiful lagoon in which there were large amounts of; fish, birds and many more animals. The twin brothers, upon hearing this, made their friend take them to this place so that they could visualize directly what they were being told. To get to the mountain range they had to cross a series of difficult trails which were full of animals, swamps, a large 15-meter boa that was devouring an animal.

Despite all the difficulties, the twins and their friend arrived at the place and were able to observe the great tree, they tried to cut it down asking for help from all the animals that were there in this place, a falcon told them that this tree is surrounded by a great mystery since it does not lie in the roots or in the trunk, but was in the crown. Once the falcon tells him this story, the brothers fly away leaving a beautiful golden flash in the sky.

One of the friends went to the tree and took a few leaves and roots, once she had them in her hands she looked at the sky and recited a series of magic words, in this way the potion of leaves and roots that were in her hands became in a squirrel that climbed the big tree, and stayed there, the brothers were very surprised by the sight of the lagoon of pure and crystalline water in which there were islands full of animals.

This place also had a large islet which was located in the center of the lagoon in which there was a large vine (climbing plant), which climbed towards infinity, the squirrel that had been the product of the magical words of the brother He went towards this vine and proceeded to cut it with his teeth, in this way the tree fell when it was cut and once it was knocked down it made a great noise.

This action caused the water of the lagoon to spread over the entire surface of the place and that the fish that were there went out to find their permanent channel, on the other hand, the rest of the animals headed towards the jungle to populate it.

What this did was that the rivers were larger and with a strong abundance of species that were going to totally enrich the flora and fauna of the time, although everything seems wonderful, it is not so since the twin brothers and their friend had an end very tragic since they were crushed by a huge black rock that fell from the top of this big tree once it was felled.

At the beginning of the year there is nothing better than planting a tree of abundance, so that its color, aroma and energy reign in our home throughout this new year, even though it is a plant that does not require from the great effort to plant and cultivate it, like every plant, it needs some care that will be mentioned more explicitly in the following lines.

If you have the joy of receiving this bush as a gift, you can plant it in your garden and you will see that it will look very good there, in addition to giving it a different touch to your home and whoever says Feng shui is right who has a bush of these in your house will have a year full of happiness and riches and abundance will not be lacking in your home.

The main characteristic that can be named of this tree is that it is semi-woody in addition to having robust and very bright leaves, most of the people who know this tree indicate that it has a great resemblance to another tree known as; Succulent this tree is fleshy leaves. Thanks to this type of leaves that it has, it allows it to have the ability to resist periods of extreme drought.

Another relevant characteristic that can be mentioned is that it has a thick stem which is slightly lignified and that it is reddish-brown in color, the leaves of the bush have an oval to rounded shape with cream-colored edges, also from From the end of spring to the beginning of summer the tree produces tiny flowers which have a peculiar star shape and are respectively lilac in color.

To plant this type of tree, it is best to do it in a pot so that in this way you can control its size and thus avoid waterlogging, it is ideal that the pot where you are going to plant the tree has a series of holes so that when time to water the tree the water has filtered and its roots will not rot, you must find an ideal place inside your home in your garden to plant, it must be a place where the light is constant and that the light lasts all year and that the tree in winter time does not get cold respectively.

To plant this tree you must get a few porous and spongy stones (such as pumice) and you are going to place them at the end of the pot where you are going to plant the tree and this will make the humidity last and keep the plant healthy. is to use black and fertilized earth, now we are going to know a series of care that must be taken with this tree:

How to prune tree of abundance?

Pruning the tree of abundance is not difficult at all, we just have to follow the following steps: