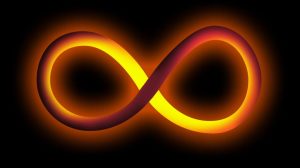 The Infinite symbol is similar to the number eight but placed horizontally, surely we have all seen it at some point and are able to recognize it, but do you know its meaning? Have you read its history? In this article you will be able to know everything of the infinity symbol, find out.

How can we start talking about a symbol that can be recognized with so many different meanings. All human beings at some point in our lives have referred to infinity, we can use the infinity symbol in a mathematical expression, but we also use it to refer to very long periods of time or to the infinite love we feel for someone.

As we can see, the infinity symbol is used in actions and situations that are really dissimilar, this is because there is an intuitive perception of its meaning and also a formal perception induced through education. When the historical information of infinity is reviewed, it is possible to identify the amount of time that had to pass from the truly intuitive perception of infinity, to the construction of an expression and symbol that allows it to be recognized and they try to explain it.

The Greeks are recognized as the first who managed to reach certain proposals, some incoherent, when they tried to carry out the analysis of infinity, the problem is that from where the search for an explanation is focused on infinity, it is perceived as the unfinished, what never finish or end.

The proposals of Aristotle and Plato for its use and explanation dominated the scene for a long time, but it was in the Middle Ages that infinity took on philosophical and theological connotations, considering that only God has the power to be infinite.

We must then imagine that during history enormous injustices were committed in the name of religion and against the scientific explanations of the unknown and in unlikely opportunities for the time, for which the proposals that sought to explain the universe were recognized as true heresies.

The infinity symbol was used for the first time in mathematics by John Wallis, in the mid-seventeenth century, he used it to represent some elements that have no limit and apparently used the Greek symbol of the ouroboros as a base, it is a representation of a snake-like animal that bites its own tail.

This Greek image is associated with the eternal return, with the repetition of cycles permanently and incessantly, so we can recognize that they related life as an infinite phenomenon, although this was obviously not linear.

Another of the interpretations that the infinity symbol was given to the Middle Ages is that it represents a unity in diversity. How can we understand this interpretation? It can be from the base that nothing is lost but everything is transformed, like the beginning of energy.

In reality, its origin is unknown for sure, but most of the theories and hypotheses to explain it indicate that it is a religious symbol of ancient times. When we analyze the root of the word infinity, it has its origin in Latin where “in” means without and “finis” means end, therefore, infinis in Latin is the word infinity that means without end.

Why can infinity seem so abstract to us as humans? It is due to the fact that in our material life there is nothing with this characteristic, however, in the religious and energetic sphere it makes perfect sense.

That is why the infinity symbol is used and has a lot of meaning in the field of metaphysics, in feng shui, in reiki. In the infinity symbol duality can be recognized, it is a way of representing the union of the two opposites, it is clearly the representation of the law of polarity, it is recognized as the representation of opposites such as masculine and feminine, day and night, ying and yang, birth and death.

We must understand that the forces must be compensated in order to be in balance, therefore, if we start from the center of the infinite symbol, we will evolve, but we will also regress, we are then called to be fully aware of our actions and their consequences, for which makes the cosmic law of cause and effect present.

If we carry out an analysis of the meaning of infinity from the point of view of metaphysics, we can recognize that it is related to health, through the practices of repetition, managing to reduce physical, mental and spiritual pain, taking us as an integral being to the healing of people.

It is also used for the renewal of positive energies and release of negative energies. In feng shui, the infinity symbol located in the west coordinate of the house, office or room is used to favor interpersonal relationships. For its part, in Reiki, it represents the spiritual path, so it is associated with evolution, with the divine.

As we have been observing, depending on the field, infinity will have a meaning and a reading, therefore, we consider it appropriate to summarize the different meanings that the infinity symbol has. For the world of spirituality, infinity is related to healing processes, pain relief but from a comprehensive approach, since it seeks the healing of the physical, mental and spiritual planes, but it is also recognized with the beginning and the end. .

For astrology this symbol is recognized as the representation of love, freedom, family. From the astrological point of view, infinity is the balance of forces, it is the representation of duality, of opposites. For Reiki, which is an alternative medicine technique that transmits energy and seeks healing through the laying on of hands, the infinity symbol is a healing element.

Imaginatively simulating or drawing the infinity symbol on the person on whom hands are being laid is the way Reiki uses infinity to eliminate negative energies.

As for Catholicism, they recognize in infinity the resurrection, and eternal life. For common people who are not identified with any of the practices mentioned above, the infinite symbol is recognized to convey feelings of eternal love, fidelity, union.