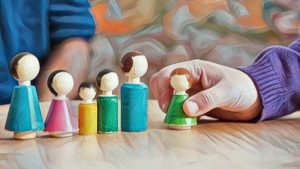 There are specific moments in life in which there are usually tensions and conflicts throughout life. Family constellations is a pseudoscientific method used although it is considered somewhat dangerous. Come and discover more here.

What are family constellations ?

There is a method that helps release tensions, conflicts and hereditary problems from past generations, which are passed from generation to generation in family histories.

This method is called “psychotherapist”, it was created by Bert Hellinger, philosopher, theologian, pedagogue. This method, as we have already said, helps in releasing tensions on problems such as: death of children or parents, separations, abortions, conflicts of fight, family or domestic violence.

The family constellation, called in German “Familienaufstellung”, which in translation means “position in the family”, this is considered a pseudotherapy where people who are capable of assimilating without being aware of patterns in family relationships intervene. family, remaining in the memory of the person.

Likewise, the method is based on pseudoscientific concepts such as morphic resonance and quantum ecstasy, all of which are characterized by objective lack of effectiveness. It also presents unrecognized elements in relation to social and systemic anthropology, psychiatry and psychoanalysis.

These problems of past generations or the past as it is known can have repercussions in the present such as: psychosis, fatigue, migraines, relationship problems, fears, depression, etc.

As we said before, this is usually the summary of unresolved problems of family ancestors, which are transmitted from generation to generation.

What are they for?

What are family constellations for?  In relation to this question, some maintain that it is the method created for the treatment of sadness, depression, childhood traumas, melancholy, overcoming tragic moments in people’s lives such as relationships in the past, problems of the children at any level, as well as family difficulties.

How are they made ?

There is a page on social networks about the Spanish Association of Bert Hellinger family constellations , in which there are publications about their method, which in a summarized way we can describe it as: the solution of the various conflicts that we have by inheritance, this method is made of individually or in a group.

In a group it has the following characteristics: it is divided into 3 levels: with the client personally, who will determine the specific situation that he wants to see resolved. Another way is when you are a representative and the person is placed at the service of the client, who will be representing a member of the family. So we can see how family constellations are made.

You can also participate as a member by observing and helping with energies during the constellation process.

Subsequently, the constellator or person who constellates, indicates the specific person to expose their problem, then selects the people who will represent the current family or origin.

Once this is done, he will place them and ask them to make movements according to the energies that are in the process and that they feel while the constellation lasts. The constellator indicates and moves the various people while saying phrases about family constellations , these phrases will help while those present are speaking.

The process of family constellations will be completed by inserting the client and asking him to occupy the corresponding place and his participation in terms of that healing image of the family.

Individual family constellations can also be performed . In this case, dolls or figures are used, which allow establishing the Family System. In this special process of perceiving the energies that are used are effected by the client and the person who constellates only.

There is accurate evidence of the opinion that human beings unconsciously have connections that have to do with their ancestors. These will be discovered for healing.

The previous idea is defended by Rupert Sheldrake, this one deals with the morphic resonance in relation to the connection of the destiny of each person with that of the ancestors. This method is based on energy fields that connect the memory of people and their present with places or animals from the past. This is similar to those who practice Reiki.

This therapy is not supported by scientific evidence. There is no study that determines its effectiveness. Family constellations never compare to effective therapy in any way.

If it gives positive results these will be attributed to human suggestion and empathy only.

These family constellations do not present a scientific or realistic model of explanation.

It is covered with pseudoscientific concepts such as morphic resonance or quantum mysticism.

For the practice of family constellations it is not necessary to do a training to be able to practice it. This is one of the reasons why they proliferate anywhere in the world.

To do so would be incurring in the violation of article 18 of the deontological code that determines: “Without prejudice to the legitimate diversity of theories, schools and methods, Psychologists should not use procedures or methods that are not duly tested in relation to the limits of knowledge. current scientist.

As pseudotherapy, it adheres to precepts that are not evolved or modified in relation to what their creator determined and persist in a vision of family and ancient society.

There is the city of Rosario in Santa Fe, Argentina. Family Constellations Rosario , is a group that practices everything related to family constellations. In these groups are grouped people who carry out these practices that we have already determined above.

Also in this association, to put it in some way, workshops, conferences and papers are held on this topic that although it is not well known, it covers many topics in relation to these practices.

As a conclusion for this topic we can determine that family constellations are a type of method or kind of therapy, with a theoretical model of ideas taken from other types of pseudoscientific beliefs or if you want magical.

This kind of therapy is from a very old and conservative view of the family.

As we mentioned throughout this article, these are techniques that must be done well and be clear about the procedure to be followed. Since any error could be harmful to the people who participate in it. Since energies are released that must be very well channeled.