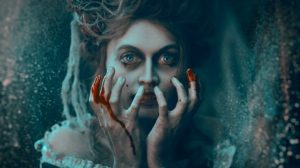 There are people who have the strange ability to absorb the energies of others, these people are called energy vampires.

These people, even if they remain silent, make us feel uncomfortable, emanate negative emotions and have an attitude of always asking to be taken care of, who need more attention than anyone else, who suffer a lot, etc. This type of person absorbs the energies of others, so the ideal is to avoid these people whenever possible.

Learn more about who energy vampires are and how to protect yourself from them!

This type of vampire could be a friend or childhood friend, cousin or even neighbour. One way to prevent him from absorbing energy is through the following ritual:

Place a green candle on a wooden plate or something similar. Leave this candle burning for an entire night. The next day, clean this plate which will be like a magic shield.

To activate it, you must stand in front of the front door of the house and pick up the plate with both hands. Slowly bring it to the top of the head and then to the front of the chest. Afterwards, to the right of your body and to the left.

Finally, it should be approached from the right foot and then from the left. Finally, from that day onwards, a novena to São Miguel Arcanjo should be prayed, always with the plate facing the door as if it were a mirror that repels the negative.

Many people when they are at work often suffer from lack of concentration, physical pain and feel that a general malaise invades them especially when a certain person is close to them.

To protect yourself from this situation, thyme and wormwood should be placed inside a red envelope. Then write on different pieces of paper the names of the people you feel drain your energy.

Seal it or glue it and say, “If you want to be a nuisance, look for your name on the envelope, stay there until the herbs hold you down, cleanse you, or dissuade you.” Hide the envelope at your place of work. Every time the person is close, take the envelope and shake it repeating the phrase.

If it has been discovered that the boyfriend or girlfriend or whoever is in a relationship is an energy vampire and you want this situation to end, you can use the following ritual:

Grease your hands with a few drops of cooking oil. Then the person’s name must be written on a piece of paper and, next to it, put their name. Hold the paper between both hands, palm to palm, as if to pray and, shaking, say three times: “United we were in a harmful bond.” Open your hands, look at the other person’s name and repeat three more times: “It’s time to go and say goodbye.”

Then take a pair of scissors, which you have already dipped three times in holy water, and cut the paper in half. Keep your name in the pocket closest to your heart and take a handful of rock salt and throw the paper containing the other person’s name there, throw the salt and the paper into the sea.

Then put all the items in a green bag; expose the bag to the rays of the sun, at the time of the new moon, and keep it for seven days under the pillow; Carry it with you every day in a pocket, purse, briefcase or wherever it is close to your body.