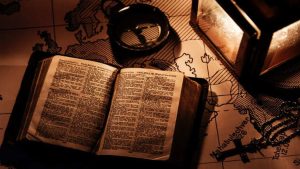 In this article you will be presented and taught several of the great Contradictions of the Bible , which are too difficult to believe, since the bible is a set of ancient documents and books of both Christianity and Judaism of ancient times, so that is considered a kind of record or reflection of when Our Lord Jesus Christ lived with humanity.

Great Contradictions of the Bible

Our holy bible is currently considered a holy book by absolutely all Christian currents that exist today, so it is normal for many to faithfully believe that moral guidance can be found in its writings to live our lives according to plans or designs. that our Lord Jesus Christ had.

The Bible is also one of the best and most recognized best sellers in the entire history of humanity, that is, it is part of a list that is highly recognized by more than 90% of all humanity, therefore it is also one of the best sellers. on the planet, but like the great works of fiction, this one has several continuity problems in its writings, which are not overlooked by most believers, whether they are Christians, Jews, Muslims or Buddhists, since these are so obvious that they They are impossible not to recognize.

Below you will see five major contradictions of the bible that perhaps you did not know or you simply overlooked but surely more than one you already open to recognize, it should be clarified that these small details of continuity that are observed in our sacred text do not lower the legacy nor the historical value that said document possesses since we will only clarify the different versions of the same phenomenon that are presented within the bible, which can have a logical explanation, since said document of such antiquity has had a multitude of authors as well as it is also encompassed by different eras of history.

To what extent should not steal

We all know that stealing is bad, and is considered a sin according to the Bible itself, since it emphasizes it in its ancient texts, that under no circumstances should such an act of inconsideration and greed be carried out, but in said ancient texts it is it specifically contradicts the same in the part of the Gospel of Luke, where it is described as Jesus himself calls and commands his followers to steal a donkey in the name of God;

“And it came to pass that when he came near Bethphage and Bethany, near the mount called Olivet, he sent two of his disciples, saying, Go into the village opposite, where as you enter you will find a colt tied on it. which no one has ever ridden; untie him and bring him. And if someone asks you: “Why do you loose it?”, in this way you will speak: “Because the Lord needs it.” So the envoys went and found him as He had told them. As they untied the colt, its owners said to them: Why do you untie the colt? And they answered: Because the Lord needs it”.

Man or animals, which came first?

According to the ancient text, specifically in the verses of GENESIS 1:25-26 and GENESIS 2:18-19, these contradict themselves since in one it tells us that Our God first gave life to the beasts of the earth and then created man in his image and likeness, but in the other verse it is the opposite and it is the one that most know the most, which is the one that affirms that God first created man and it was later that the animals appeared so that man would not feel only.

“And the Lord God said: It is not good for the man to be alone; I will make him a help meet. And the Lord God formed out of the ground every beast of the field and every bird of the sky, and he brought them to the man to see what he would call them; and as man called every living thing, that was his name.” GENESIS 2:18-19.

Jesus, the dispenser of justice

According to the passages of the gospels, we are told that Jesus was sent to earth with the purpose of bringing peace and love among men, since he is also described as a very peaceful man and without a hint of evil inside him but this is contradicted in Matthew 10:34 where messiah says:

In said document in the passage of DEUTERONOMY 24:16 it narrates that no father or son paid for the sins of the family but in Isaiah 14:21 it mentions the opposite of it since it says the following:

“Prepare for their children the slaughterhouse because of the iniquity of their fathers; lest they rise up and take possession of the earth, and fill the face of the world with cities.”

The last words of Jesus

Everyone knows the last words that Christ said while he was on the cross, but not everyone knows that these words vary in different passages of the Bible, although the most prominent version is that of PSALMS 22:1, but this does not mean that the other 2 versions are wrong since it can be said that they are testimonial differences according to the author.

“My God, my God, why have you forsaken me? Why are you so far from my salvation and from the words of my cry?” PSALMS 22:1.

“And Jesus, crying out with a loud voice, said: Father, into your hands I commend my spirit. And having said this, he breathed his last” LUKE 23:46.

“Then Jesus, when he had taken the vinegar, said: It is finished! And bowing his head, he gave up the spirit.” JOHN 19:30

It should be said that throughout the history of our God Jesus Christ, a diversity of facts and words have been revealed by various authors of different centuries, it is estimated that the Bible was composed for about sixteen centuries, so they are known as inconsistencies or lack of continuity may be due to this. According to the fundamentalists, they say that God himself dictated the Bible word for word, but we do not think that since the most reasonable thing that can be said and explained is that God was the inspiration of the authors, that is, he speaks to us through them. If you want to know a little more about this topic here we will leave you a small video about it.

If you found the article interesting and to your liking you can take a look at these others, they will surely interest you: