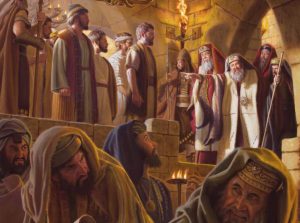 Zealots, if you don’t know who the Zealots were in the bible, you are in the right article to discover everything about them, we will comment on their history and their importance in the New Testament.

Who are the Zealots?

The Zealots were a political movement – nationalist, it is one of the most violent factions of Judaism of its time. The Zealots clashed relatively frequently against the Pharisees or Sadducees, who also organized themselves into factions. Today the term zealots are used as a synonym for militant radicalism or intransigence.

Scholars of history identify the Zealots as one of the first guerrilla groups, why do they identify them in this way? Because among their actions was the murder of civilians, especially those who were identified as collaborators of the empire. Roman. Within this faction, there was a division that was extremely radical and they were called the sicarios.

The purpose of this faction was to be able to make Judea independent of the Roman Empire, but through an armed organization, in fact, the first Judeo-Roman war which occurred between the years 66 to 73, in this first war they managed to control Jerusalem and later the city ​​was taken by the Romans again. The Romans attacked the Temple and then occupied the Masada, which was the last refuge of the Zealots, before the loss of their last stronghold the defenders of it committed suicide before falling into enemy hands.

The gospel and the zealots

Perhaps to the surprise of many readers, one of the apostles selected by Jesus to be his disciple belonged to the Zealot faction and was even one of the most important leaders, we are talking about events that occurred in the first century. It is Judas, who is identified as John Simon the Zealot, this definition of Judas is found in the Gospel of Saint Luke.

It is also said that Judas Iscariot was a hitman of the Zealots, however, there is no convincing evidence for this statement, because in the Gospels of Luke, Mark and Matthew, which are the ones that mention Judas, they refer to Judas as a Zealot, Canaanite or Kanan We assume that this statement arises from the name of Iscariot, which has its origin in the word ish-kraioth, which is interpreted as the man with the sica, which is a curved dagger that was used by the assassins.

Zealots are also referred to in the New Testament when Barabbas is mentioned, who is said to have been part of that Zealot movement. Barrabás is put in prison for murdering a person in a brawl and despite this, he was chosen to be released, over the freedom of Jesus of Nazareth, which can be taken as a victory of the Zealots over Christianity.

However, we must keep in mind that Jesus was not an earthly messiah, which is why the Zealots did not recognize him as a triumphant Messiah, because Jesus did not use violence, rather he was totally against it. Actually Jesus was a spiritual leader, his triumph was to accept the will of the Creator God.

The Zealots and Christianity

As we have indicated, the Zealots were an extreme nationalist movement, their ultimate goal was a Judea free of Romans, for the time there was an inevitable encounter with the incipient Christianity of the moment. There are even historian scholars who see in the movement a political messianism, which coincides with the religious messianism of Jesus and therefore on occasions and because of this coincidence of the time Jesus is identified as a religious revolutionary.

It is true that the world in which the Christian doctrine, the word and work of Jesus was developed, was full of zealots, however, there is evidence that Jesus on several occasions marked a strong opposition to Jewish nationalism, due to the actions that this group undertook, which were not shared by Jesus and were really far from his word.

If in fact Judas Iscariot was a leader of the Zealots, then we can understand why he was able to betray Jesus for only 12 gold coins. It is possible that Jesus was aware of Judas’ participation in the Zealot movement, but we must remember that Jesus came in search of those who were out of God’s way, that is why he chose him to be one of them. of his disciples.

Where the difference between the Zealots and Christianity lay, it was not only in the bloody and violent actions that were undertaken by this group of rebellious men, which of course were unacceptable in the eyes of Jesus and his followers.

Also within this group, faction or religious sect, there was zeal for Jehovah or Yahweh, they were radical in their thought and religious belief, so they tried to get the Jews who had converted to Christianity to return to the Law of Moses, which it was the only one that they recognized as fulfilling the will of God.

Added to this religious struggle was, of course, the liberation of Judea from Roman rule. The movement was founded in the first century by Juan Simón el Galileo, it began with the imposition of a census that had created the empire, they prepared for a long time, to become an organized group.

Had it not been for the organization, strategies and leadership within the group of Zealots, they would not have had the temporary success they maintained over Judea and at times interfering with the word and work of Jesus.