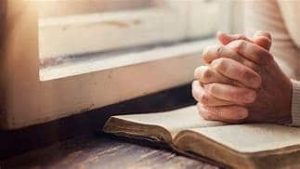 Under your protection is a prayer of supplication that is made to ask for God’s protection against all evil, and is requested through the Virgin Mary is a very old prayer that every Catholic should know, learn it by reading the following article.

It is considered the oldest prayer dedicated to the Virgin Mary, dating from the third century approximately around the year 250, it is a prayer of just 10 lines that has a very important spiritual value for the Church

In the middle of the 20th century, when the John Rylands library in Manchester, England, had possession of all the codices of the New Testament, they decided to publish the discovery of a papyrus from Egypt where it contained the prayer in the Greek language.

The papyrus was found within a batch of documents that the institution had acquired approximately at the beginning of the century, the ten-line text remains intact as it is today and in the same way as the faithful pray.

However, the papyrus was torn in some parts, the text had to be reconstructed, taking as a reference the same portion of the Christians who lived in Egypt prayed it with the name “Under your mercy”, where at the beginning of Christianity the devotion to Mary was starting.

The antiquity was then demonstrated not only of prayer but of the cult of the virgin, being a main characteristic the consideration towards an intercession towards God but a position of power directly. Let us then see the content of this beautiful and ancient prayer “under your protection

The other important characteristic of this invocation to Mary is that she is not considered simply an intercessor before God, but as having at least a certain power of intervention: ‘deliver us from danger’, it is written on the papyrus. As the author says, “’seeds’ of further development, which will be projected in the following two millennia”.

“Under your protection we welcome, Holy Mother of God; do not reject the prayers that we address to you in our needs, rather deliver us from all danger, oh glorious and blessed Virgin! Amen.”

On some occasions when it is performed at mass the following is added:

“Pray for us, Holy Mother of God. So that we are worthy of achieving the promises of Our Lord Jesus Christ. Amen.”