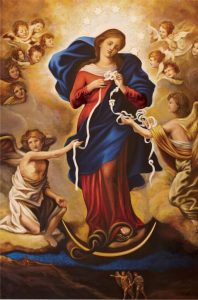 Story of the Virgin Undoing Knots

It is a Virgin of German origin, who has many followers for being a very miraculous virgin. The Virgin Untied Knots has been venerated since 1706, her name is actually Our Lady of Knotenlöserin. It is a beautiful Marian invocation, in which the faithful raise their prayers to the Virgin Mary, present in the Virgin Untied, because she helps her children to solve difficulties and also eliminates all the ties that prevent men from following the path of God. without deviating.

Its common name or rather the translation of its name is what makes it known as the Virgin Undone in Spanish, it is because its name Knotenlöserin, translates «Knot» which means knot and «Löserin» which means undo, untie. .

Since he was so grateful that the Virgin had granted his request, the young husband asked a renowned artist to paint a picture that represented the benefit he had received from the Virgin. The artist represented the Immaculate Conception, protected by the Holy Spirit and surrounded by angels and other details that we will discuss later.

The artist who represented in the painting the favor granted by the Virgin was called Johann Georg Melchior Schmidtner, a man of recognized trajectory of the 16th century. This image was donated by the young man and was placed in the altarpiece of the Blessed Virgins of the Good Council, this place was destroyed, although it is not known how or what exactly caused the destruction of the Good Council, the painting was not damaged and was placed in the church of San Peter am Perlach, located in the city of Augsburg, Germany, where it is to this day.

Representation of the Virgin

We can recognize the representation of the Virgin Untied Knots through a beautiful painting where the Virgin is depicted in detail on which the presence of the holy spirit is found, represented as a dove. The virgin is surrounded by angels, who accompany and serve her, one of them extends his hand with the ribbon full of knots and the miracle is observed when another of the angels picks up the ribbon without knots, which passes through the hands of the virgin.

The Untied Virgin is the Immaculate Virgin of the Conception, recognized by the presence of the moon. Also in the representation the serpent is observed as the one that encourages men to sin and they are accompanied by an angel through the darkness. But the Virgin Undoing the Knots not only removes obstacles from the path but also eliminates the cause of all of them as she passes.

This affirmation is represented in the painting by the virgin in which one of her bare feet is on the head of the serpent, the problems that are represented in each knot that is seen in the tape, are untied when passing through her blessed hands, which is the interpretation that she ends the problems. By the year 1700 the image was known as Maria als Knotenlöserin in Germany.

Virgin Undoing Knots and The Faithful

Where was the first place where the virgin was seen in the American continent? The first image was reproduced in the chapel of a University of El Salvador. Then a few years later in Argentina, some faithful contacted the parish priest Rodolfo Arroyo, who was in charge of the church of San José del Talar, who was asked to paint the image of the Virgin untied knots in the church.

Negotiations were made to request the endorsement to carry out the painting with Cardinal Antonio Quarracino, who was the archbishop of the city of Buenos Aires, who accepted and approved the request. The image found its special place in the Argentine parish and is visited and venerated. The number of faithful who attend to venerate the Virgin Desatanudos, on many occasions exceeds the capacity of the church where the image is painted.

Due to the fact that the number of faithful grows over the years, at this moment the possibility of consecrating a new special temple to carry out the veneration in a larger place is being analyzed. But how did the image of the Virgin Desatanudos arrive in the Argentine country? It came through a religious student who went to Germany and brought a picture of the Virgin Desatanudos.

That student is today one of the faithful of that Marian dedication and also came to develop an excellent priestly career, becoming Pope, he is Pope Francis, whose first name is Jorge Bergoglio, the student who brought the image of the Virgin to Argentina.

For the Catholic Church, the virgin knot-breaker is also recognized as “Mother of good advice” and based on the original request that generated her Marian representation, she is called “Patron of marriages and conflicts in the lives of people and peoples”. Another country that joins the veneration of the Virgin Desatanudos is Mexico, where a Temple is being built in Cancun, specifically in Quintana Roo.

Prayer to the Virgin Undoing Knots

Below we provide you with a beautiful prayer addressed to the Virgin Untied Knots: Most Holy Mary, you beloved Virgin, blessed and adored mother of God, you who accepted without question the will of God the Father, and filled yourself with his beautiful Presence.

You Beloved Mother who together with your Son, interceded for our difficulties, with your example you taught us to have patience to untangle the knots of our lives. Now as our Mother you find yourself as our Mother and show us the strength of our bonds that unite us to the Lord.

We ask you our Mother to untie the knots that hinder the development of our lives, receive in your hands (Make the Request), free us from the ties, and please intercede and deliver us from all evil. Amen.