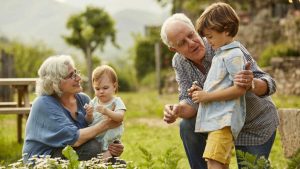 The family, like the person or the couple, is not a static entity, it is characterized by being dynamic, evolving as it develops, which is why many contemporary authors distinguish at least eight stages of the life cycle of the family.

We invite you to discover a little more about the family and its life cycle, a subject of great importance at the present time, when trying to preserve this figure in a society in crisis. Don’t stop reading this article.

The family and its life cycle

A family is a micro-group to which each human being belongs and which should have a structure capable of satisfying material and spiritual needs. It also represents the first social environment in which the development of the person’s mental, emotional and intellectual functions takes place.

Although staying in it has many demands, it is worth it for its subjective benefits. An important and punctual event in the biography of each person is his family: parents not only feed and clothe their children.

They also establish the basic habits that later form the behavior and leave their mark on a new life. For the state and society is considered differently, they have a very different social definition of the family.

For them, this is a group of people connected by blood, marriage or family ties, as well as, as a rule, living in the same territory. This allows you to structure people into separate groups that form the basis of society.

The family life cycle or family life   cycle consists of those relatively stable stages that each couple goes through individually.

That is, they are those stages or emotional and intellectual facets that are traversed as a member of a family, ranging from childhood to the years of retirement and retirement. Each family is a dynamic group that evolves and transforms as it develops.

In the 1970s, therapists, social workers, and sociologists became very interested in this longitudinal dimension of family life and identified the main stages of its life cycle.

Each stage of their life cycle involves a reorganization of family relationships and the rules of shared life.

The changes that occur since the young adult acquires independence, form a couple, then have small children, etc., are many and varied.

Many professionals and researchers have described the changes that take place in family functioning at various stages of its evolution and the transitional crises that can arise in the transition from one stage to another.

Just as a business grows and changes, so does a family, most go through predictable phases of maturation from startup to retirement. Each phase has different needs, projects and financial goals.

When the life cycle of the family suffers some interruption or presents inconveniences and difficulties to carry out the tasks and objectives of each stage, situations are triggered that alter the internal stability of the family and that, if not corrected promptly, will cause a crisis.

Stages of the life cycle of the family

The family life cycle usually has the following stages:

1-The departure of the young single adult: in this phase the individual takes charge of their own emotional and financial responsibilities, it is what is known as empowerment.

2-Formation of a couple: the union of families through the constitution of this new couple, which represents the commitment to a new system.

3-The family with young children: the birth of children is one of the changes that generally has the greatest impact on the life of the couple, since it represents the admission of new members to the system, with the responsibilities that this entails:

4-The family with adolescents: it is a stage where changes can generate certain crises, since it is the stage where some family limits must be relaxed a little, to take into account the independence of children and the vulnerability of grandparents.

Parent-child relationships must change to allow teens to enter and exit the system, which is a challenge for many parents.

This usually happens because the proper limits are not set. either due to the refusal to allow the exit or gradual detachment of the adolescent from the family nucleus or due to the absence of limits.

This is seen in those cases where the parents become friends of the child, ceasing to be parents, so the roles are no longer clear to the adolescent,

In addition, there is usually a stage where matters related to marriage and career are reconsidered. It is a phase where the transition to shared care for elderly parents begins for many families.

5-The departure of adult children: it is a phase that focuses on the acceptance of the multiplicity of arrivals and departures within the family system.

Adult-to-adult relationships develop between children and parents, since it is the stage where they must form
their own family.

Therefore this requires a readjustment of relationships to integrate spouses, grandchildren and in-laws.

It is also a time where the person must face the illness and death of their parents, and the children that of their grandparents.

6. The family whose spouses are retired: it is a phase where the transformation of generational roles occurs, which is usually difficult for many couples to accept.

It is a stage of new challenges, a reunion occurs between the members of the couple, now without children, who have their own family and have left home, also because of the termination of employment.

The way in which this meeting stage is handled is decisive for whether life as a couple continues together or not.

The culmination or end of working life, known as retirement, is the beginning of a new stage, where things can be done that were postponed due to different obligations, enjoy grandchildren and organize other projects.

The basic model of the family has become universal and includes different stages that obviously begin with the phase of formation, expansion, contraction and finally dissolution, however, there are other models of the life cycle of the family, which vary from the one mentioned above.

Among the models that are frequently used are:

It sets out five stages:

This model is the most generalized and used by sociology, psychology and medicine. It consists of eight phases:

This model focuses on families going through predictable stages or phases, in which each member must develop skills and attitudes that allow them to face and overcome different challenges.

This obviously implies that, at each stage or phase, changes or adaptations are made in behavior and way of thinking.

The adaptation to the different stages deserves that the family accept the central principle of each one and conquer the tasks and tasks of the stages that precede it.

The Carter and McGoldrick model consists of and describes six stages throughout the normal development of the family:

Model of the World Health Organization (WHO)

The model presented by the WHO begins with the union of the couple or marriage, until its dissolution due to the death of the members.

Life cycle of the family according to Lauro Estrada

Lauro Estrada Inda is a medical professional, psychiatrist and psychoanalyst, involved in the area of ​​research, teaching and clinical practice.

With a brilliant career, Estrada has published articles in scientific and popular magazines, in addition to being the author of several books, including “The Life Cycle of the Family”, first published in 1982.

It is a text that focuses on the different phases that the family structure goes through and offers tools that allow recognizing and understanding these stages or phases:

“ The family, also from a useful point of view for our purposes, can be considered as a social cell whose membrane protects its individuals inside and relates them to other similar organisms outside.

The family is precisely the living substance that connects the adolescent with the world and transforms the child into an adult.

Knowing, therefore, the structures of the family and conceptualizing its functions, not only helps to better integrate a diagnosis, but also offers new insights in the treatment, prevention and investigation of emotional problems “.

For Lauro Estrada Inda, the structure of the human family goes through six stages:

During each phase or stage, the family undergoes changes and is upset, so adapting to this is imperative. However, in some cases this adaptation can occur in a healthy way or, on the contrary, in a pathological way.