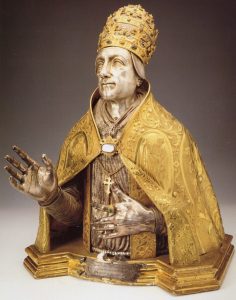 San Lino was a Saint character of the Church, he became Pope for twelve years, he was considered by Pablo as a companion and highly appreciated by him, in this article you will be able to know more about him, his biography and more.

Lino, his Latin name is known as Linus. He is also known as Papa Lino or Lino de Volterra. He was born in the city of Tuscia in Rome in the late 1920s or early 1930s. His father was Herculaneum and his mother Claudia belonged to a Christian family.

Lino developed a large part of his life within the religious Christian community, persecuted at that time. According to his studies, his life would develop in Volterra and later in the city of Rome. He was Pope or Supreme Pontiff of the Catholic Church between the years 67 and 76.

He was chosen by Saint Peter himself to be his successor, which made him become his collaborator, thus achieving great acceptance among the Romans, for which he is appointed to carry the fate of the Church in times of difficulty.

Because he was the successor of Saint Peter himself, it is the reason why the Catholic Church considered him as the II Pope. Even today he is considered an important character because there is not much information about him.

Likewise, San Lino was given responsibility by the very apostles of the Episcopate of the Church founded in Urbe. It is said that he exercised his ministry at the time of following Nero.

Lino appears as Peter’s successor between the years 174 and 189 in the work called Against Heresies (Adversus haereses) by the author Irenaeus of Lyons, in which Lino appears first.

After Peter and Paul built the Roman Church, they gave Lino the responsibility. As we mentioned before, Paul in his letters to Timothy names Lino in them. Lino is succeeded by Anacleto and later Clemente replaces him, he still kept the preaching of both apostles which he kept as a tradition before his eyes.

After the stalking of Nero, of which Peter and Paul were victims, the Church of Rome reveals itself within a darkness for a century with some rays of light of hope.

Lino is also included in the apostolic succession of Rome by Hegesippus of Jerusalem, which was initiated by the apostles Peter and Paul, where the contemporary service of Lino and Clement in relation to Paul is mentioned and highlighted, as well as the service as bishops who are mentioned later by Epiphanius of Salamis.

Lino is designated Pope, however in the early centuries, the term “Pope” was used in relation to the bishops of important cities. Lino lived a difficult moment in relation to the church and endured harsh situations of following against the Romans, who still considered them a Jewish sect.

According to data obtained and in relation to the periods of duration of the Popes that have existed, the period in the pontificate of Lino lasted twelve years. To be more exact and according to the Liberian Catalog, it indicates that the real time was twelve years, four months and twelve days.

According to the dates given in the previous catalog from 56 AD to 67 AD, they are not correct. Because at this time the authors of the fourth century maintained that Linus held the position in Roman society during the life of the apostle.

The above was established as an example according to the writer Rufino, in the header of his translation of the book “Recognitions”. However, this assumption has no historical basis.

In relation to the data of Irenaeus in relation to the Church of Rome in the second century, it is not possible to doubt that Lino was appointed to be the leader of the Christian society of Rome, after the death of the apostles Peter and Paul, in question. it is not certain either.

According to the data collected from different studies, San Pedro himself recognizes in Lino several characteristics such as piety, humility, simplicity, with such pure, solid and outstanding feelings, as well as capacity and greatness, Pedro sees in Lino these characteristics being so necessary in time. when the church was barely born and there was a need for good and faithful ministers.

During the Emperor Claudius the church enjoyed tranquility, until the early years of Nero, seeing this Pedro seeing that calm decides to attend the Council of Jerusalem, as well as to make some apostolic excursions.

Due to this and in order not to leave his flock without a shepherd, he orders Lino to be Vicar of Rome together with Clemente and after the acceptance of the faithful.

Later, Pedro sends Lino back to Gaul to bring the light and word of faith. Lino with the same feelings that characterized the apostles, crosses the Alps, entering different regions where idolatry existed. He arrives at Bensanzon, a famous city on the river Doux.

Before his arrival in the city, Lino met an official named Onosio on the way, who was a speaker. Onosio observes Lino carefully for being a foreigner, however he notices his modesty, asking him where he comes from, what his religion was and what was the reason for his trip.

At that moment, Lino takes the opportunity to make Jesus Christ known and tells Onosio the following:

“I adore the one and only true God, Creator of all things, whom I beg to be prosperous to you. This true God has an only Son, Eternal and Powerful like Him; and this, his Son, moved by the blindness and misery of men, became a man for the health of all of them: in his name, Jesus Christ, he wanted to die on a cross for the sins of humanity.

After listening to Onosio, whether out of levity or mockery, he began to laugh; however, as he had already heard of Jesus Christ crucified, he was curious, and wanting to know the story, he invited Lino to his house. Lino accepted the invitation and a few days due to his sweetness, modesty, and unique holiness, he took possession of the Speaker’s heart and esteem, thereby achieving Lino’s conversion.

Lino died in the year 76 or 78, according to studies he was martyred. Lino’s memory was forgotten for many years. He was even forgotten until the event that Tertullian himself considered St. Cletus to be Peter’s successor.

Lino was the creator of the fifteen bishops, and he ordered that women should enter churches or temples with their heads covered by a veil. During Lino’s pontificate the Evangelists Luke and Mark were martyred.

Lino is thought to have been buried in Rome, near or next to Peter’s tomb, as well as those of other Popes.

The book of “Liber pontificalis” ensures that Lino’s body buried in the Vatican, according to the author, is next to Saint Peter. There is no certainty as to why the author makes this claim.

This is because Saint Peter was buried on Vatican Hill, and it is equally possible that the bishops who started the Roman Church were also buried there.

However, this has not been proven by the Roman Church of the 4th century, given the fact that at the end of the 2nd century the feast of the martyrs was created and Lino does not appear in the list of Roman saints of the 4th century.

It is said that in 1615, when the confession took place in San Pedro, several sarcophagi were obtained and one of them implied the word Lino.

According to the theory given by Severano in relation to it in (“Memorie delle sette chiese di Roma”); it is that these sarcophagi possibly contained the first Roman bishops, and the one containing the aforementioned inscription belonged to Lino’s burial.

This assertion was repeated by several authors. However, according to Torrigio’s manuscript, it can be thought that they belonged to other characters such as Aquilino, Anulino. This discovery of the tomb constitutes proof that it is not Lino’s tomb.

On September 23, the festival of San Lino is celebrated . This coincides with the same date that appears in the “Liber Pontificalis”.