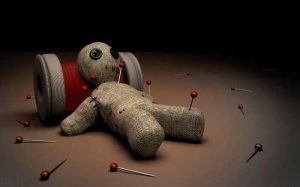 Surely at some point in your life you heard about the famous voodoo dolls and their ability to control people if you want to know more about this controversial topic, continue reading the post you will discover how to make a voodoo doll.

How to make a voodoo doll?

Voodoo is characterized by being a religion which is not very well seen by all public opinion since most people define it as a bad and even dark religion due to the scope that its practice can have, voodoo is a religion practiced mostly by African ethnic groups such as ethnic groups; Ewe, the Benin, the Mina, the Fon of Togo and the Kabye.

Although voodoo is a religion that is practiced primarily by African ethnic groups, however, the practice of this religion has already reached communities in various areas of the Caribbean and already has thousands of followers, since during the discovery of America many African slaves were who came to American lands and brought their traditions and religions which were adopted by the inhabitants of those lands at that time and are still practiced with the same intensity today.

The various types of voodoo that can be found today, and their differences lie in the territory in which the religion is cultivated, for example, if we talk about the case of Latin American countries in these countries the beliefs in Christianity are immense , but instead in African countries it is not like that since in these territories the practice of voodoo prevails.

However, it should be noted that this influence has already reached other countries for some years and has also become the main religion of many believers, which is why at the beginning of the paragraph it was mentioned that the types of voodoo depend on the territory and those currently in existence are:

Now that we know a little about the voodoo religion, if we are going to move on to the main theme of the post, which is how to make a voodoo doll, the important thing is to keep in mind that this type of procedure is carried out through very particular rituals. The practice of this religion by most societies has never been frowned upon since in movies and fictions the reality of this religion is totally distorted.

The reality is that rituals are not performed with the purpose of harming someone, quite the contrary, these rituals have a main objective: to heal, to attract happiness, to attract good energies, etc. In voodoo rituals, what is done is the innovation of the so-called loas, that is, they are like the saints of this religion and who, by their intersection, grant the wishes and demands that are requested.

The invocation of the loas in the rituals is done through dances that are given to the rhythm of the drumming and traditional songs of the religion, the dances and songs are made in the sacred places and they must be directed and presented by a voodoo priest and they are also in charge of drawing the esoteric symbols of the rituals and at the end of them an animal must be sacrificed as an offering to the gods.

We are going to know below the materials and the procedure to achieve how to make a voodoo doll to control a person  , pay attention to the indications if you want to do everything perfectly:

Procedure to make the doll:

To begin with the realization of the doll, the first thing to do is proceed to cut the fabric to give shape to what would be the body of the doll, then the dress of the doll is shortened, that is, the shirt, the pants to dress and adorn as if that doll were the person you want to control, after the doll’s body and clothes are there, you are going to do what would be the doll’s head, you are going to place a beautiful smile and pretty eyes there, you are inspired by imagining that person and the whole procedure of the doll you must do with all the love in the world.

You must put all your energies into making the doll so that your desire to control that person can come true, put a lot of faith in the making of the doll, always imagine that the doll you dress and decorate is the person you are going to control. at the end of the doll. Once the voodoo doll is completely ready to control that person, you must baptize the doll so that it gives the desired results and for this you are going to say this prayer: I baptize you… you name the person… in the name of the Father, of the Son and Holy Spirit.

After finishing the whole process now if the doll is ready to control that person to whom you dedicate the doll, you will be able to control their actions, their desires and their life in general. To complete the process before I begin to control the person, you will say the following; at this moment your life is under my control… you give the name of the person…

How to make a voodoo doll to fall in love?

To begin with the ritual of making the voodoo doll to fall in love, the first thing you should do is take what you managed to gather from that person, whether they are hair, nail clippings or even pieces of clothing worn by that person, then You have already gathered these elements, you are going to proceed to join the doll, that is, tie it, but also with what you took from yourself.

It is important to keep in mind that the elaboration of this ritual must be done with the new lunar phase, that is, with the new moon, beforehand you are going to prepare your altar or you will link where you are going to do the ritual you will understand the white candle and in a loud and clear voice You are going to repeat the following words: “Ribbons that unite and embrace. Your heart with mine is intertwined.

After you finish reciting the words, you are going to place the doll back on the paper and you are going to leave the candle flame on for about an hour, and you will see how that person you want so much will begin to show love and an immense interest in you. you and fall madly in love, when you see that the spell has taken effect, you will take the doll and wrap it in a handkerchief and keep it somewhere safe so that the attraction continues.

How to make a homemade voodoo doll?

Surely many people want to know how to make a voodoo doll to harm , however this religion, as I already indicated at the beginning of the article, is not used to harm anyone else, that is why if you are looking for this information you will not find it here , what if you managed to find how to make a homemade voodoo doll, pay attention to what is described below.

Preparation of the doll:

You are going to cover the pieces of cloth that you just placed on the doll with the natural glue to give the doll more consistency, then you are going to proceed to make a face for the doll as perfect as you can, for the eyes and mouths you can use buttons. Once you finish the face now if you can dress your doll and if you want it to look like someone, try to give it a personal touch of that person and put something that belongs to it.