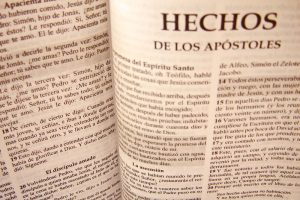 The old testament and the new testament are the two parts that make up the bible. The latter recounts all the events from the birth, the resurrection of Jesus Christ and after that. It will be announced  how many are the books of the new testament , which in its entirety is segmented into 27 books, written by the disciples of Christ.

How many books does the new testament have?

The new testament is composed of the gospels, the acts of the apostles, the letters of the apostles and finally the apocalypse. Each one of them covers  how many are the books of the new testament and form the 27 books that together achieve the final message that God wanted to transmit to humanity; the hope and the arrival of the divine promised land next to him.

The word gospel that derives from the Greek (euggelion) represents “good announcement” giving rise to the expected and promised son of God, Jesus Christ. That narrates his life from birth and the passage of his teachings such as God’s love towards humanity, his mercy and above all the acceptance of forgiveness. All this becomes evident when Christ was crucified to save us from our sins.

The authors of the gospels are the apostles Matthew, Mark, Luke and John. Taking into account that each one of them tells the story from his point of view, very differently; the life of Christ. Some competent in the matter believe that the gospels were created 60 years AD

Which are distributed as follows:

Acts of the Apostles

It refers to the days underlying the resurrection of Jesus Christ, marks the first steps of the primary church and its expansion through communities from the city of Jerusalem and beyond, to the ends of the earth.

This could only be carried out by the apostles, guided only by the words of Christ about the kingdom of God and by the power of the holy spirit that was revealed to them to enforce it.

The church considers that they were written by Luke, as the second half of the Gospel of Luke. Although they remained separate because individually the meaning that the author wanted to convey is better appreciated. In total, it is made up of 28 chapters.

The facts are dedicated to an anonymous man that the author refers to as “Teofilo”. It is believed that it started from 30 AD since it happens in the course of 30 years the events after the 60 AD that the imprisonment of Paul in Rome took place.

letters of the apostles

Most of these letters were the work of Saint Paul. In them he transmits the guides or instructions of Christianity to be able to clear the doubts, concerns of the followers of God. In addition to the correct way of administering the church. The letters are divided into Pauline and general, their distinction is due to whom they were addressed. It should be noted that one of the epistles, specifically, the epistle of Hebrews is anonymous and is not considered in either of the two categories mentioned.

There are 13 cards in its entirety. They reveal the importance of the church. They were in charge of establishing the plans and relationships as the duties of those who were part of Christianity. As well as confirm the foundations of the Christian faith. Amend the failures that the expansion of the gospel entailed in the different regions that were exercised. These are:

As the name implies, these letters were intended for a more general audience of Christians. They are formed by 7 letters of the main apostles in the history of the bible. The Paulines, on the other hand, focus on individualism and for congregations.

This book was written by a man who called himself John but not to be confused with the apostle John however the church claims that it is. The name apocalypse is also curious since most interpret or associate this word as a catastrophic event or with the end of the world as we know it.

Actually this is derived from two great languages, from Latin (apocalypsis) and from Greek (apokalypsis) which is equivalent to the word “revelation” that coincides with the popular name that has been given to the last book of the new testament and of the bible as such. And that represents the holy spirit as the cause of all revelation that is in it.

It is considered unique and the most studied in the Bible since interpretations vary greatly with respect to who is analyzing it. Since it depends on the symbology of its texts, the narratives of the events that occur, make it difficult and complex to understand. In addition, its main characteristic is the prophetic, none of the other books has this particularity.

The vast majority of translations of the New Testament were poorly done before the 12th century, meaning that they were all in Greek and full translations in the desired language were rarely used.

For this reason, over the years, attempts have been made to translate correctly in many languages, in more than 200. This in turn leads to problems of meaning with respect to a language, since not all translations are 100% accurate in their original language. . The main objective is to spread the word of Jesus Christ to be guided in his heavenly wisdom.

Relevance of the new testament

In the Old Testament, God makes promises to humanity that in time the eternal son will come, who will bring with him the definitive truth. In the new testament, the fulfillment of said promise is made and precisely for this reason it becomes the most relevant, surpassing the old one.

It focuses primarily on Jesus Christ, the son of God, in the Gospels of Matthew, Mark, Luke, and John. They narrate from the beginning of his life, as well as the course of his actions and teachings towards his disciples, the people close to him and those who firmly believed that he was the promised one.

Finally, after his resurrection, they were in charge of spreading the words of Jesus Christ and the way of taking care of the Christian church to show that if there is salvation for humanity, as the end of it relates. Accepting Christianity.

Deuterocanonical, comes from the Greek and is a compound word (deuteros) means “later” and (kanonikos) means “belonging to a rule”. Apocrypha from the Latin (apocryphus) meaning ‘to hide away’. Even these words are consistent with the events related in the history of these books.

They are books that were not included in the Hebrew Bible and therefore were not considered as sacred books later, this happened in the Old Testament and in the New Testament.

In the new testament they did not have as much discussion as in the old one but still the doubts were present whether to include them or not. That is why they were kept, so to speak, on the waiting list until time passed and the Christian people will adapt to them. , which happened since in 1500 AD the Roman church formally added them to the bible.

These are the deuterocanonical or apocryphal books that were included in the new testament: