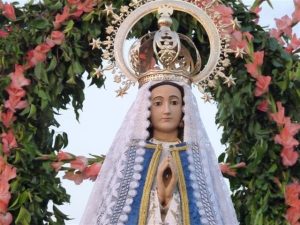 As faithful believers and practicing Catholics, we believe in the Virgin Mary, mother of Jesus, and in her different invocations. Thanks to this article you will be able to know everything related to the Virgin of Itatí, prayer, image, and much more, do not stop reading it.

History of the Virgin of Itatí

This Marian dedication is worshiped in the sanctuary of the department of Itatí, on the north side of the province of Corrientes, on the banks of the Paraná River, Argentina. This city was founded by the Franciscan religious Luis de Bolaños, on December 7, 1615.

The veneration of the Virgin of Itatí dates from the year 1589 as a result of the Franciscan religious taking the image to its current place in the sanctuary. It owes its name to the native language of the Guaraní people, Ita  , which means rock, and ti , which means white, that is, the translation would be “White Stone”, since it was found very close to the lime deposits, near the Calería stream.

For that colonial era there were many disputes between the indigenous settlers, for territorial control and their fights were very bloody. Then the members of the Franciscan order led by Luis de Bolaños, decide to move the image from the Ciudad Real reserve to the province of Guayrá where they built a sanctuary to pray and ask the virgin. Due to the attack of a rival tribe, the place was destroyed and the image of the virgin was lost.

According to historians, the figure of the Virgin was located by a group of Indians in the Alto Paraná riverbed, very close to the port of Santa Ana. They say that the image of the Virgin of Itatí appeared surrounded by a very bright light, perched on a stone, and that music could be heard that was not produced by any human. Her relocation to the reserve was immediately ordered by Fray Luis Gámez.

As a result of the fact that the port of Santa Ana is totally abandoned since its inhabitants decided to leave, it is when Fray Luis de Bolaños has the idea of ​​establishing the Indian reservation in this place. Giving it in the name of “Indian Town of the pure and clean conception of Our Lady of Itatí”, which over the years began to be known as Itatí.

Coronation of the Virgin of Itatí

The image of the Virgin of Itatí was exalted by Pope Leo XIII on July 16, 1900, with the name of the Queen of Paraná. She ran the month of February 1910, when Pope Pius X established the Diocese of Corrientes and on April 23, 1918, she is crowned as the patron saint and protector of Corrientes.

The beauty of the image of Our Lady of Itatí is such that many are impressed by her dark complexion and her incomparable sweetness every time they have the opportunity to see her. True Mother’s eyes can be seen in her, which give the sensation that she is looking at every believer who comes to her in search of a miracle or a favor from her. Her face transmits a serenity and peace that invades the soul of the fervent believer.

Carving of the Virgin of Itatí

His image was carved using two magnificent tree species, the body from the majestic Timbó tree and the face with the most splendid Nogal. The size of this image is one meter twenty-six centimeters high (1.26 meters), recreating the image of a Virgin with beautiful black hair, who is standing on top of a kind of crescent, her beautiful hands They come together in a similar prayer position, which are surrounded by a rosary.

He wears a blue cape, provided with embroidered elements in gold thread, and on his head he wears a white tunic, and on top to finish off the detail rests a crown that has twelve stars around it.

Miracles of the Virgin

To keep a detailed record of all the miracles that the Virgin of Itatí performed to the parishioners of the town. They were collected according to the real stories of the actors themselves and the eyewitnesses of said miracles.

His writings are simple, since he faithfully transcribed everything expressed by his protagonists and witnesses, among which we can mention:

Prayer to the Virgin of Itatí

“Most tender Mother of God and of men, who under the invocation of the Pure and Clean Conception of Our Lady of Itatí, looked with eyes of mercy for more than three centuries at all those who have invoked you”.

“Attend to our needs that you know them better than I do”.

“Grant us a great love for your divine Son Jesus and a pure, humble and prudent heart, patience in life, strength in temptations and consolation in death”.Amen