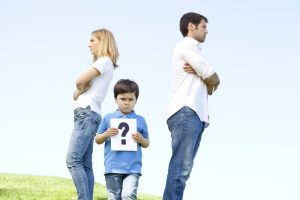 The expectations of the couple is that their marriage will be for life. And that of the children is that they will grow up next to parents who will always be together, but sometimes ruptures occur. Do you know what family disintegration is? consequences, causes and much more, enter this post where we will tell you everything related to the subject, do not stop reading it.

What is family disintegration?

It is known as family disintegration or separation, the process of rupture of a woman and a man who live as a couple, and who also have children with the consequent implications or repercussions that such an event originates within the family. The couple’s relationship is, keeping the distance, like a table that, to stay upright, needs to have its four legs in balance.

Such is the case with the family, when one of its members leaves, an imbalance is produced in the nucleus, causing in the short, medium and long term, an infinity of behavioral alterations in the children.

In recent decades the number of divorces has increased and therefore families have been disintegrated. The causes of this phenomenon are multifactorial, what is evident is the affectation suffered by the children, product of that breakup of the parents.

The most common cause of family breakdown is the untimely departure from home by one of the members of the couple. But, this phenomenon of family dissolution can occur for various reasons. Next, we mention the most frequent of them.

Divorce is the rupture of the marital bond, if we approach it from the legal point of view, it is the dissolution of the contract established for the marriage, and that, according to this, the parties undertake to negotiate the responsibilities that each one has complete and can continue with their lives separately.

Divorce is undoubtedly the factor that has had the greatest effect on the increase in cases of dissolution of the family group. Today this phenomenon has become the number one enemy of married couples. There is a nascent culture, in which the preponderance of the family is not valued above other personal aspirations.

Other causes of divorce are not being committed to the marital cause, an increase in daily discussions, the creation of false expectations, inequality in the responsibilities of the relationship, physical abuse, economic difficulties, among others.

Due to debauchery, lack of religious values ​​and distance from God, one or both of the members of a couple incur in extramarital practices that put the stability of the family at risk. The abandonment by one of its members, also causes the disintegration of the family and its subsequent consequences in the smallest of the house.

Entering the plane of adultery in a couple relationship, brings with it, that the member who was affected decides to definitively break with the relationship, or on the contrary, chooses to forgive him and they can establish a reconciliation pact. This last option is the least traumatic for all the members of the family, especially for the children.

Death of one of the parents

If the disintegration of the family is already traumatic for its members, especially for the children. It is much worse when the dissolution of the family nucleus occurs due to the physical disappearance of one of its members. This cause is impossible, impossible to control, since it obeys reasons strictly unrelated to human behavior.

Although this cause does not cause a definitive family disintegration , it does cause imbalance in the members since they are forced to distance themselves for an indeterminate time. The reasons for this phenomenon are due to political or economic reasons that force one of the family members to emigrate to other countries in search of better working or political conditions that allow them to support the family.

Aggression is one of the most serious causes for triggering family separation. When the children observe the aggression that one of their parents inflicts on the other, that episode leaves psychological sequels for the rest of their lives. It may be necessary for them to receive professional help, to minimize the impact of this trauma.

Addiction is another reason why some family nuclei are disintegrated. It is very difficult to live with a person who constantly lies in order to keep their addiction hidden. Having a family member who is an alcoholic, addicted to drugs and even gambling is to be exposed to constant fights, arguments and even physical aggression, which have a negative impact on the emotional stability of children.

Although any separation or breakdown of the family relationship is negative for the couple, the children are the ones that are most impacted. The consequences of family disintegration are devastating and we mention some of them below.

Children of separated couples are often prone to violent and aggressive behavior. Although this cannot be considered a rule, since these behaviors can also be seen in children of stable couples who live in harmony in the same space.

An important aspect to consider is that sometimes children whose home is affected by the separation of their parents tend to be victims of unscrupulous people who induce them in the world of drugs and alcohol, causing a much more serious problem. .

If it is the father who leaves the home, the possibility that the children are prone to addictions is much greater. The reason for this behavior is that children seek a father figure who is the model of their behavior in society.

Those children who are experiencing a situation of family disintegration are more likely to suffer from psychological disorders, such as depression, anxiety and sometimes loss of interest in studies. If the children do not have a solid foundation in education in values, they could reach the point of attacking their physical integrity and self-inflicting injuries and even committing suicide.

Personal relationships with our peers is an acquired behavior. And the parents are the role models, through observation. In the absence of one of the actors modeling this behavior, it causes children and adolescents to be afraid to establish relationships with other people.

This trauma caused by the separation of their parents can even affect their romantic relationships, and make it difficult for them to find partners. This behavior is in response to what was experienced during the process of separation from their parents.

The absence of one of those responsible for the family unit causes problems in the family cash flow. Family income is reduced, which results in difficulty in maintaining basic household expenses and other family needs.

The rapid growth in the number of cases of family separation, and its negative consequences on the health of its members, are reasons for concern for specialists, such as psychologists, social workers, sociologists, psychopedagogues, among others, who seek to reverse the damage of this horrible problem.

There is a growing inclination in the thought that it is necessary to modify the paradigms that are held around the current model of couple relationships, they are not adequate to the reality in which we live.

For this reason, there is an urgent need to find, through consultation, other models that facilitate the upbringing of children in the best environment, without having to suffer the conflict of family disintegration.

Part of the fact that many unions of couples are fractured is due to the fact that they frequently go through economic problems that trigger a series of events, which are a breeding ground for a separation of the couple to take place.

Hence, the importance that before deciding to increase the number of family members, parents must have previously ensured all the necessary resources so that raising children is a motivating and enriching experience. And no, a traumatic experience, which ends with the breaking of the union of that couple, who promised to live together until death separated them.

Not in all circumstances, the couple’s relationship is resolved with the willingness and collaboration of the spouses. It is also necessary to have the help of specialists who channel the concerns or doubts of the spouses.

Although it seems a bit strange, trying to make a simile of the terms integration and disintegration is not a far-fetched idea. In other words, family separation or disintegration is sometimes not entirely negative, for the simple reason that, given the desire to remain integrated as a family, it deprives the superior good of guaranteeing the well-being of the children.

In other words, family disintegration can be the panacea to the problems that are being generated within the family. The object of conflict, once outside the family nucleus, ceases to be a disturbing agent, as long as it has not been generated for reasons of physical violence, addictions or other reasons,

The problem may be or have been generated by the lack of understanding between the couple, the love that was driving that relationship has ended, or simply because a space is needed to achieve personal goals. Relationships end, it is something normal, what should be avoided is the rupture affecting third parties, and much more if those third parties are the children.

Families, like the rest of the organizations or social groups, respond to dynamics, norms and values ​​that are characteristic of society. It is framed in the laws that govern men and those of God, and that respond to a preconceived idea of ​​the ideal structure that a family should have. But it is important that all citizens are open to new family forms or structures.

In general, we have a deeply rooted idea that a family is considered dysfunctional when it does not comply with traditional pre-established models. But our current reality includes single-parent families, that is, those that are made up of one of the parents and one or more children; there are also families whose structure is made up of members of sexual diversity, and everyone, absolutely everyone has a place and the right to live together in our society, as a family.

In our current society, the vision of family disintegration is very diverse. Each person looks at it from their perspective, his perspective, it would be very risky to say who is right or wrong, because they are analyzes that are made from a critical approach, and therefore it is extremely difficult to establish a single parameter.

The important thing is to guarantee the well-being of the children, that after the separation of the parents they can continue to lead their lives normally. Even knowing that he is going to go through a process of readjustment and pain.

This modality is not so serious, since there is prior acceptance of the couple. It is executed with the shared protection of the children, avoiding greater affectation of the minors.

Breakup with trauma and issues with custody

It occurs because one of the members causes damage to the other, whether physical or psychological, in addition to a legal process for the custody of the children.

It is the most serious of all, and where the children are involved in scenes of physical violence against one of the parents. This leaves sequels for life, in family members.