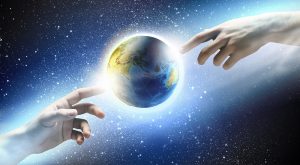 One of the questions that every Christian frequently asks himself or not is who created God? It seems elementary to think, if everything has a beginning and an end, why not God? Thanks to this article you will be able to learn in a simple and easy way everything about who created God, the Bible, the church and much more, do not stop reading it.

Thinking or saying that something or someone else created God, undoubtedly also involves asking the question of what other person, thing or entity gave rise to that by which we have God present in our lives. But necessarily the debate of ideas is opened, that something else created what, that resulted in the creation of the architect of the universe, but it is an endless story to ask this series of questions or doubts regarding the origin of everything that we know today.

Considering the theory of self-creation as something tacit, without the right to self-reflection or self-criticism, is something very absurd. That is, to think of who created God if he created himself implies that he existed before he existed, something illogical, right? That is why it is complex and difficult to find an answer with which we are all satisfied.

Evolutionary biologist Richard Dawkins opposes his theory based on evolution mainly as a product of genes, to the creationist theory defended by biblical theologians for centuries, where it is argued that God has always existed and is eternal.

On the other hand, if we consider establishing conclusions from philosophical or deductive reasoning, using the syllogism from three premises that may or may not be valid for the defenders or detractors of the creationist theory, we can get closer to having lights of understanding of this complex topic. For example, let us start from the following premises:

Analyzing each of the three statements, a very brief critical analysis can be obtained that there has never been a time, era or time when no creation could ever be observed in the universe, that is to say that there was always some presence of something, even if it were a small particle in the universe. It is somewhat difficult to understand, we do not stop to ask ourselves the question of who created God?, and we simply take for granted that there was always, always something before now.

From the point of view of a theologian, a believer, a practitioner of the Christian religion, there has always been a God who is eternal and spiritual, who has an appearance of omnipresence, he did not create himself, in conclusion, he does not admit arguments regarding the eternity of God. God.

Each of the fields of knowledge that defend their positions about, who created God?, tries to find explanations for each of them. For example:

In the area of ​​archeology, if during an excavation they came across objects similar to spearheads, ax heads or pieces of vessels, they would surely say that these objects are not the product of sedimentation or rearrangement processes of tectonic plates, but rather, it is the result of the advance of the groups of the human race, without giving a logical explanation of what or what were the reasons why those objects ended up in that place.

Experts on space issues, when making a space expedition on their way, will observe remains of machinery, on the back of the moon, their argument would be that all this is the result of beings provided with extraterrestrial intelligence, without knowing precisely what who are they and how did they manage to leave those machines there on the moon.

As you can see, each one defends their position without giving the other a respite, it is simply my truth and I accept it as true. It does not give the right to explanations of what has already been explained. Getting involved in an endless debate is not good for anyone, explaining the genesis of the creator God is a topic with many edges and meters of fabric to cut.

Causes that originated the universe

For the fervent believers in the holy scriptures, what gave rise to the universe was due to an immaterial cause, that is, something non-tangible since, if it had been produced by a tangible cause, it would be affected by the same forces that generate the deterioration of the planet. .

For these reasons, according to theologians, it is asserted that the beginning of the universe was due to a super natural cause, in other words, nothing material or spiritual intervened, something that goes beyond time, matter and space acted. In short, the power of the infinite spirit had to intervene.

On the other hand, the reason why the universe was created is due to the intervention of an extremely powerful force, just stop to observe the magnificence and energy that are scattered throughout the universe.

The bible tells the story of a God who is the creator of the universe, but what is not said is who created God? According to the bible , he has three properties that distinguish him, these are:

Account that appears in the Book of Psalms, chapter 90, verse 2

“Before the mountains were born and you formed the earth and the world, from the century and to the century, you are God”

It is outlined in the 29th chapter of Chronicles, in the 11th and 12th verses

“Yours are, Lord, the greatness and the power, the glory, the victory and the majesty. Yours is all that is in heaven and on earth. Yours too is the kingdom, and you are above it all.”

“From you come wealth and honor; you rule everything. In your hands are strength and power, and it is you who magnifies and strengthens everyone.

“God is Spirit; and those who worship him must worship in spirit and in truth.”

“In the beginning God created the heavens and the earth”

Who created God according to the bible and how long did it take him to create the universe?

The Bible states that God first created the heavens and the earth. It is what we have been taught for centuries, and seen from a critical point of view it is a very ambiguous, vague statement, as well as having a very general character. In it, no specification is made of how much time God used to be able to complete his work of creating the universe.

On the other hand, those who favor the creationist theory are fully convinced that it took God six days to create the universe. An idea that of course is not shared by those who base their knowledge on scientific work, that is, those whose only reasoning is centered on science and does not admit any other truth that comes from sources other than science.

The bible does not state, nor does it mention, the statements made by pro-creationists and fundamentalist defenders, in which it is intuited that the days that were used for the creation of the universe actually lasted twenty-four hours each. .

In the Bible the term day is used to refer to certain periods of time, but whose duration is not specified. For this reason it is very valid to believe that the days of creation could have lasted for thousands of years.

Did God rely on evolutionary theory?

On the planet there are millions of people who do not believe in the Bible and do not practice what it teaches. They also believe that life is the product of chance, and that it was generated as a result of the combination of a set of inert chemical compounds that could be combined and transformed through undisclosed processes.

Many of its defenders believe that there was a time when an organism or bacterium was created by itself that was capable of cloning itself. And that with the passage of time it underwent a metamorphosis until it became the species that currently exist. For a group of people this idea is somewhat absurd, since it would be impossible to believe that man with his complex system comes from a bacterium.

Another group of people who are in favor of defending what is said in the theory of evolution, but who are also believers in the holy scriptures. They take it for granted that God created the earth, all life on and below it, and then assumed a role of supervisor or director of creation and its process of evolution. But the latter is not mentioned in the Bible in any of its books.

Defenders of what is written in the Bible

It is written in the bible and it is very significant, that Yahweh  created all kinds of plants, flowers and animals, he also made men and then women, provided them with self-awareness and with the greatest capacity to love and proceed wisely and fairly.

It is logical to think that over the years these species of plants and animals that were created by God have undergone a series of transformations in order to adapt to the changes that have occurred on the planet, giving rise to very marked differences with respect to to the species of genesis. Because what is expressed in the biblical scriptures, does not oppose the scientific objections of the variations that have been generated within the genera and species.