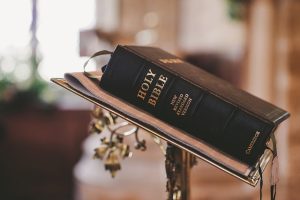 What does the Bible say about marriage? , there are many verses where they raise the benefits of marriage, if you do not know them here in this article we will guide you and indicate how to know them.

What does the Bible say about marriage?

The bible is the most important spiritual instrument of millions of people in the world, it serves as a reference to correct behaviors, spiritually heal our being, convert belief in God as a weapon to overcome fears, problems and vicissitudes.

Based on this, there are various descriptions that refer to  marriage according to the Bible , many verses where they give an example of how to solve problems between the couple, strengthen the marriage union and correct mistakes to consolidate and attract love between the two again.

When the bible says “what God has joined”, to express the way in which God blesses and consolidates the marriage between a man and a woman, being a subject of great seriousness and of sacred content, for which it induces people who read the bible, increase your success in the marriage relationship.

There are thousands of descriptions regarding  marriage in the Bible that appear in various verses, epistles and metaphors, below we will describe the ones that we consider most important, for example in Genesis the following is said:

Then said Adam. This is now bone of my bones and flesh of my flesh; this one will be called Varona, because of the man she was taken. Therefore shall a man leave his father and his mother, and be joined to his wife, and they shall become one flesh” (Genesis 2:23-24).

“God created man and then made woman to complement him. In the Bible, marriage is God’s “solution” to the fact that “it is not good for man to be alone” (Genesis 2:18).

He identifies the protection between the couple when he mentions the value that Eve had by being by Adam’s side, considering him his other half, and expresses in Matthew the following regarding this topic:

“So they are no longer two, but one flesh; therefore what God has joined together, let not man put asunder” (Matthew 19:6).”

There are also many epistles regarding this subject and one of them expresses the following:

“Husbands, love your wives, just as Christ loved the church and gave himself up for her. So also husbands should love their wives as their own bodies. He who loves his wife loves himself. For no one ever hated her own flesh, but rather sustains and cares for it, as Christ also does for the church. For this a man will leave his father and his mother, and he will be joined to his wife, and the two will become one flesh” (Ephesians 5:25-31).

However, where in the Bible does he speak of marriage ? In various verses that express his opinions and advice to those who are married:

“Whoever finds a wife finds happiness, tokens of his favor the Lord has given him. “Proverbs 18:22.

“That is why a man will leave his father and mother and be united to his wife, and the two will become one body.” Ephesians 5:31.

“In any case, each of you also love your wife as yourself, and let the wife respect her husband. Ephesians 5:33 | NIV |

“Exemplary woman, where can she be found? She is more valuable than precious stones Proverbs 31:10.

“Husbands, love your wives, just as Christ loved the church and gave himself up for her to make her holy. He purified her, washing her with water through her word. Ephesians 5:25-26.

“But in view of so much immorality, every man should have his own wife, and every woman her own husband. Corinthians 7:2

“Wives, submit to your own husbands as to the Lord. For the husband is the head of his wife, just as Christ is the head and savior of the church, which is his body. Ephesians 5:22-23.

“In the same way, the husband should love his wife as his own body. He who loves his wife loves himself.” Ephesians 5:28.

“Let all of you esteem marriage and conjugal fidelity, for God will judge adulterers and all who commit sexual immorality. Hebrews 13:4.

“You have heard that it was said, ‘Do not commit adultery. But I tell you that anyone who looks at a woman and covets has already committed adultery with her in his heart.” Matthew 5:27-28.

Marriage as a contract in the bible

God establishes that marriage is not only a contract but much more than that, it consists of a sacred union that establishes the spiritual, emotional, and even material ties of a man and a woman, in Mark 10: 6-9, he says. “God made them male and female. For this reason the man will leave his father and his mother, and the two will be one flesh ‘, while the planet genesis: […]. Therefore, what God has joined together […], let no man separate”

So what does the Bible say about marriage? That a question in which he expresses the following represents for two people who consider themselves believers in God a very sacred union that should only be broken when one of the two dies, so that the success of the marriage depends on both, and the bible supports and reinforces with its spiritual historical descriptions, the benefits of the union.