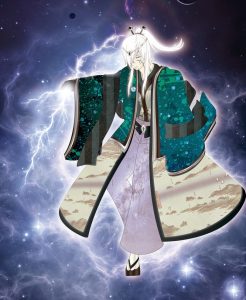 Japanese gods are part of Japanese mythology. In addition to being very rich in terms of the history of its nation. They contribute with most of the customs of their people, as well as the traditions or festivities that they carry out in honor of them. They have a great effect today as many of their qualities are applied in Japanese anime, movies, series and products.

The curious thing about these Kami, which means Japanese gods , is that for most of their people, they do believe in them. They are real to their culture, there are even documents or the oldest books in Japan such as the Furukotofumi, which show that these Kami were part of the daily life of each one of them, that they were much more than just legends. Despite the fact that there are more than 7,000 thousand Japanese gods, each one of them must be respected.

Which totally differentiates them from the other mythologies that exist in the world, since they are only based on myths of how these gods can be and their relationship with everything in this world. For the Japanese it is not like that, these gods contributed enormously with their history. With the events or events that happened in it. And even of the people or kings who ruled the Japanese territory.

These are the main deities within Japanese mythology. Izanami, her with her husband, who is also a god, Izanagi. Their names are similar since both mean: that they are what they invite others. They are what they decided to form as you know it today, the earth. But this was due to the intervention of the original gods, beings who were at the time the universe was created and who created these two gods who would be in charge of procreating and founding the world.

The original gods granted them a rod that is considered to be from the heavens. And this one was so beautiful and powerful since it was decorated with the most glorious and unimaginable rocks that exist, they called it Amenonuhoko.

With this insurmountable artifact, Izanagi and Izanami went to a walkway called Amenoukihashi, which communicated the place they came from, which was the sky, and the place where the two of them were going to impose a new order together, the earth. And with the rod they moved the seas in circles until everything was very stormy. When the last drops of salt water that came off the rod finished, they created groups of islands or regions.

Children of these two Japanese gods

At the end of his work of creating land. They shuffled from the place of the gods and occupied one of the islands they founded to make their home there. They build a huge castle, but in order to create it they had to go in completely different directions, he to the left and she to the right.

They reached a point where they had to meet and at this point they had to start the marriage ceremony. Neither of them knew how to start so it was Izanami who greeted him first, thus they became a couple. The first children of this union did not result prosperously, since when Hiruko and Awashima were born they had deformed characteristics.

Izanagi and Izanami were devastated and for this reason they put their first children in a small boat and moved them deep into the ocean. So that in this way you can communicate with the original gods by going to them in search of the truth and solutions to your situation.

Seeing how desperate and sad they were because their children were born that way, they advised them to repeat the marriage ceremony again, because it had been done wrong from the beginning. The woman did not have to greet the man first, but the other way around. Thanks to the consultation, Izanagi and Izanami repeated it again but this time making sure it was correct.

This time the marriage had these main gods: Awaji, Iyo, Ogi, Tsukushi, Iki, Tsushima, Sado, Yamato. They did have many more children who were gods and founded many more places on earth.

End of the union between Izanagi and Izanami

There is a very sad story of how this marriage ended. The goddess Izanami having her last child, Kagutsushi as the god of fire, due to complications of childbirth, dies. Izanagi her pain and torment were so great at losing her mate and her great love that she did not measure her actions, and she murdered her newborn child. From Kagutsushi’s blood other divine deities were created.

His love for the goddess was so enormous. That he embarked to look for her in hell but her attempts were frustrated since the goddess Izanami had consumed food from that place, tying her eternally in hell. She told him that she was still hoping that she would come out, he just had to talk to the people who ran the place but that he had to wait, without seeing her.

He didn’t resist waiting for her so long and what he saw left him scared and disgusted. His wife with the worst aspects, in a state of decomposition. She was once beautiful and now she was a monster. Izanami, furious at the audacity of her husband, sent him to capture but he did not let himself and managed to get out of the shadows of that place. Sealing with a large rock and thus breaking the bond of marriage that these two shared.

The goddess Izanami has the title of founder of life and the one who can call death, all because at the end of her marriage to Izanagi, she promised him that she would kill many people who live on earth, such as about a thousand To which Izanagi told him that he would try to create twice that.

Once Izanagi was able to get out of hell, he set out to relocate all his energies and renew those that were in a very bad state from having spent so much time in that place. So that’s why all the outfits that he was wearing, he was taking them off little by little.

And in each of them a new god was born and even from his body children were born to him. And the ones that were most outstanding are those that were created from the features of his face. These are the following:

It is one of the most outstanding in mythology. Not only because she is the daughter of Izanagi, creator of the earth, but she also has many powers and is given various titles in her honor, such as: the goddess who illuminates the heavens or the goddess of the sun. She was born from her father’s right eye while trying to clear her energies.

This goddess contributed to human beings by creating fabrics for the production of clothing. Also to know how to plant rice, which was and is very important the consumption of such integral food. For this reason she could not be alone fulfilling all her duties that required great physical effort, she had maids who spent time with her all the time for that reason.

As everything in life is not perfect this also applies in the circumstances of the gods. Since the goddess Amaterasu had a great confrontation with her brother Susanoo hers, she did not know if he was going with the best intentions towards her.

Because Susanoo had recently had a disagreement with her father Izanagi. This is why the goddess decided to make certain challenges to check the actions of her brother. But in reality it did not come to anything, since her brother was in a good position but she still did not believe him.

Susanoo, upset with his brother’s ideas, started several very bloody and violent battles against him. He dared to behave boldly with her and her companions. He ruined several rice fields that she herself had created. But what exploded everything for the goddess Amaterasu, was that he brought her the head of the celestial foal, this was a very appreciated and untouchable being for her. Which led her to an absolute depression. For this she tried to flee from the madness and evil of her brother.

Such acts caused him to take refuge in a cave. This brought many misfortunes to the entire world as the goddess who illuminates the heavens was gone, and all that remained was an unprecedented darkness on earth. Many gods and common people begged her to come out because they were afraid of so much darkness, but she turned a deaf ear to her pleas.

So the goddess of celebrations, Uzume, had an idea of ​​how she could get her out of there. She placed a huge mirror that was facing the entrance of the cave and out of curiosity she began to dance naked, making all the people laugh at such an action. The goddess Amaterasu fell into the trap when she heard the laughter and came out to see that she was the one generating it.

In that her glorious light was reflected in the mirror, and she loved how divine she looked. Meanwhile the others took advantage of covering the entrance of that cave. But there was nothing to worry about as she was so amazed at her reflection that her depression melted away. That is why she is given the first ray of light in the morning. She is also named goddess of sunrises and her symbol is the mirrors.

He is the god of the moon. He is the son of Izanagi, who procreated him from his right eye. He is the second to be born when his father was cleansed from the things he lived in hell and then his other brother Susanoo was born.

This God has one of the most curious myths. It is said that Tsukuyomi was the closest to his sister the sun goddess, Amaterasu. That they even lived together because of how well they got along. Until one day there is a celebration at Amaterasu’s house. In this act he, out of rage towards the food goddess Ukemochi, murders her because she badly delivered the food he was asking for.

Amaterasu the sun goddess, terrified by what her brother had done, began to run away from him. And that Tsukuyomi is always chasing her to explain the truth to her. Since in some stories it is said that he did not kill her.

This was the last Japanese god to be born from Izanagi, when she resolved her impurities and was procreated from her nose. He is in charge of being the god of the oceans and the one who causes storms in the world. When he was born his father knew that he was extremely powerful but that in his soul there was coldness. Even after the god of storms had been given two titles, he was not satisfied.