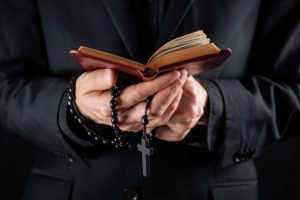 When choosing a person to carry out a mission, God prepares him adequately, giving him enough gifts to carry it out. This is what happened with Cardinal Rafael Merry del Val. In this article you will be able to know everything related to the litanies of humility, Lent, Cardinal Merry, bonds of love and much more, do not stop reading it.

The Litanies of Humility and Cardinal Merry

First, it is convenient that you know what a litany is, and this is a Greek word, which means prayer, especially prayers that are made in common. The Litanies have been used since ancient times, dating back to the beginnings of the Church.

One of the oldest Litanies is that of the saints, but there are others that are approved by the Holy Church.

Cardinal Rafael Merry del Val, was born in London on October 10, 1865, his family was part of the Spanish aristocracy. His high school studies are carried out in Brussels, and upon completion he enters the University of Ushaw, in England. While studying at the university, he is called by the Lord to serve him through priestly service.

During his youth he was a sports lover, he was very good at chess, tennis and fencing.

Because Rafael’s father was a career diplomat, in 1885 he was received in Rome by Pope Leo XIII, accompanied by his son. And at the suggestion of the Pope himself, he is recommended to him to study at the Pontifical Academy of Noble Ecclesiastics.

As he was a young man well versed in letters and languages, he led to opportunities for him to climb positions within the Clergy. In 1886 he graduated as Doctor of Philosophy, and in 1890 he did so in Theology. He obtained a licentiate in Canon Law in 1891. Because of that love of letters, he was able to write the Litanies of Humility with ease.

Because he enjoyed the esteem and admiration of Pope Leo XIII, he was assigned multiple tasks, long before being ordained as a priest. Rafael Merry del Val, received the priestly order on December 30, 1888.

When the Anglicans returned to the unity of the Church, Pope Leo XIII wrote an encyclical in which much of it was the ideas of Monsignor Merry del Val, for being a connoisseur of the Catholic truth of England. That is why in that letter written in 1895, the unification of hearts and intelligence in a single faith was recommended.

Not satisfied with the work that Merry del Val had been carrying out, Pope Leo XIII in 1896 appointed a commission to review the authenticity of the Anglican orders. And this commission was chaired by Merry del Val, in said commission all the files and documents were reviewed, for the resolution of the problem.

Pope Leo XIII died on July 20, 1903 and the College of Cardinals elected Merry del Val as its secretary of the conclave. Throughout the celebration of the conclave, while the results of the first ballots were being announced, the trend leaned towards Cardinal Sarto.

In August 1903, Cardinal Sarto was elected as the successor of Peter, and he adopted the name of Pius X. The new authority of the Vatican ratified the prelates of the Curia in their positions. But the only change Pius X made was to appoint Monsignor Rafael Merry del Val as Secretary of State.

Between pastoral life and piety

For Merry del Val it was not an inconvenience to keep up with her work at the Curia, and to engage in her social apostolate in the poor neighborhoods of Rome. He was the founder of the Pious Association of the Sacred Heart of Jesus, where he cared for young people from those most disadvantaged areas.

When Pope Pius X died, his duties at the Secretary of State ceased, but he dedicated all his time and energy to social work. Function that he continued developing, until he was appointed as Secretary of the Holy Office, by Pope Benedict XV.

The physical disappearance of this remarkable man, and without any signs that presaged his death, occurs in Rome almost at the end of the month of February. Rafael Merry del Val ceased to exist on February 26, 1930, as a result of a complication in the operating room.

His Eminence, Cardinal Rafael Merry del Val, was used to praying these litanies daily, once the celebration of Holy Mass had concluded. Here’s how to do the Litany.

First you have to open your heart so that Divine grace enters it, and then you say this prayer:

“My God, I am your servant, and my body is more than ashes and dust to us.”

“Merciful Jesus, you are meek and humble of heart. Make my heart equal to yours.”

Then, at the end of each sentence, you must say: “ Deliver me, Lord”

From the desire to be praised (deliver me, lord)

From the desire to be  whole

From the desire to be cheered

Of the desire to be chosen

Of the desire to be inquired

Of the desire to be approved

From the fear of being shot down

From the fear of being helpless

From the fear of being punished

From the fear of being defamed

From the fear of being relegated

From the fear of being satirized

From the fear of being harassed

From the fear of being separated

Now, before each sentence, you must say: “Grant me, Lord, the wish of…”

That others love them more than me (Grant me, Lord, the desire to…)

May others be more esteemed than I,

That others deserve a better opinion, above mine

Let them praise others, and ignore me

That others are considered useful and I am judged useless

That they prefer others and separate me

Of not having natural perfections of body and spirit

That they do not appreciate my abilities and skills

They don’t want to know my opinion

Let it be relegated to last place

” Blessed are those who are persecuted for the sake of justice, because theirs is the kingdom of heaven.”

Oh my Jesus, who, being God, were able to humiliate yourself until you died on the cross, and became an example for our pride and self-esteem. Give us the grace to live and practice your example, so that being humble as it correspods, to our misery here on earth, we can be exalted until we enjoy you eternally in heaven.Amen.